…a gateway to Africa. Through its portals passed not only slaves, spices and ivory, but also missionaries, explorers and conquerors. 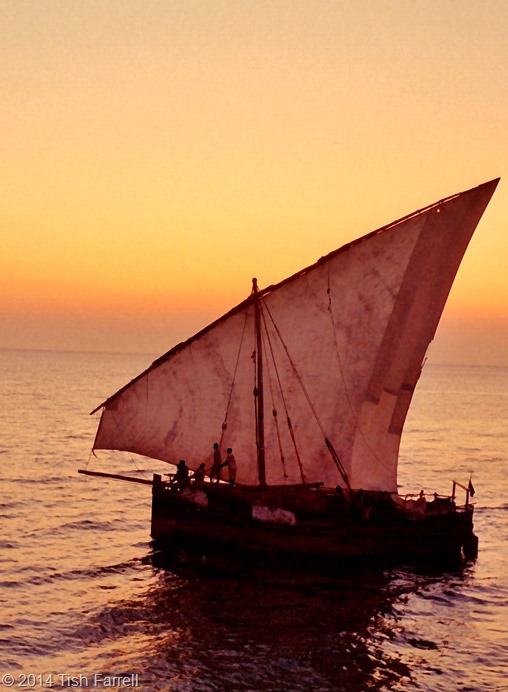 Zanzibar  – it’s all in the name – the Indian Ocean shores where Arab merchants met with African farmers and created a new people: the Swahili. In the Arabic Kilwa chronicles of the Middle Ages, the word Zanj denotes non-Muslim black people, and the word bar means coast, and the term back then referred to much of the East African seaboard – to wherever the dhow traders seasonally put in to haggle with Bantu farmers for ivory, leopard skins, rhino horn, iron, ambergris and mangrove poles.  These, then,  are the shores of the Sindbad (Sendebada) tales, but today the term ‘coast of the blacks’ survives only in the name of the Zanzibar archipelago (Unguja and Pemba Islands), now part of Tanzania.

These days too, Zanzibar Island, more properly known as Unguja, is seen as the heartland of Swahili culture, and the place where the purest form of KiSwahili is spoken. Once, though, there were many other powerful Swahili centres – independent city states that included Manda, Lamu, Malindi and Mombasa in Kenya, and Sofala far to the south in Mozambique. Such states, with stone towns built of coral rag, began evolving from at least the early 800s CE (Manda),  by which time KiSwahili was already a fully developed language, albeit with many regional forms.

In fact the trade along East Africa had been going on from well before the 9th century. The Periplus of the Erythraean Sea, a Greek account of Indian Ocean trade written around 60 CE, indicates that the people of the kingdoms of Yemen and Arabia already had well established trade routes as far south as Mozambique. The Romans had also been here, doubtless making use – as all the seafarers did – of monsoon winds that in season carried them south down the African coast, or east to India, and then, with the change in the wind,s northwards and homewards to the Gulf. 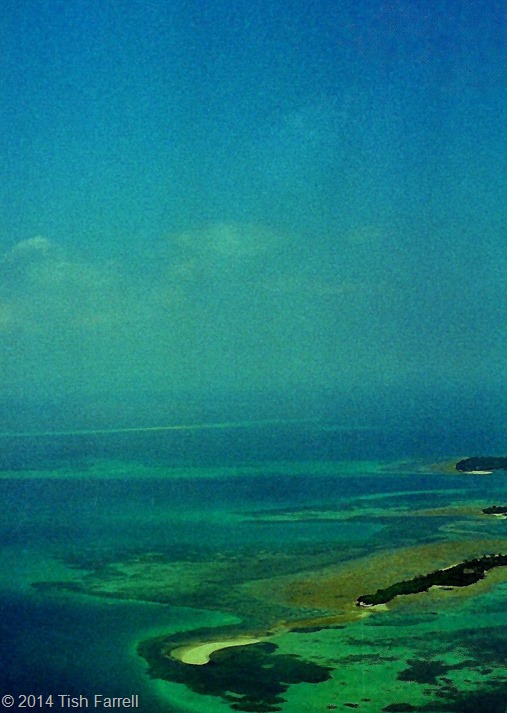 The earliest traces of a stone town  on Unguja date from the 12th century when merchant princes from Shiraz in Persia settled on the island.  Over successive centuries this settlement  was destroyed twice by the Portuguese (who, after Vasco Da Gama discovered  he could sail round Africa in 1498, seized control of the Indian Ocean trade) and once by the Omani  Arabs whom the Swahili sultans of the Kenya coast called in on several occasions to help rid them of the European tyrants. The Portuguese were ousted from Zanzibar and the Swahili mainland at the close of the 17th century, and thereafter, until the British declared Zanzibar a protectorate in 1890, it was the Omani Arabs who controlled the surviving Swahili states.

The Stone Town we see today dates mostly from the nineteenth century when the place was at its most prosperous. Abdul Sheriff describes the scene:

“Zanzibar was then a cosmopolitan metropolis. Its harbour teemed with square-rigged ships from the West and oriental dhows with their lateen sails from many countries in the East, carrying all the colours of the rainbow. Here Yankee merchants from New England drove a hard bargain with Hindu traders in their large crimson turbans or  Khojas in their long coats, exchanging ivory for American cloth; the Marseillais haggled with the Somali for hides and sesame seeds from Benadir; Hamburg entrepreneurs shipped tons of cowrie shells to West Africa, where they served as currency; and Arab caravans rubbed shoulders with their African counterparts from the Mountains of the Moon.”  (The History and Conservation of Zanzibar Stone Town 1995). 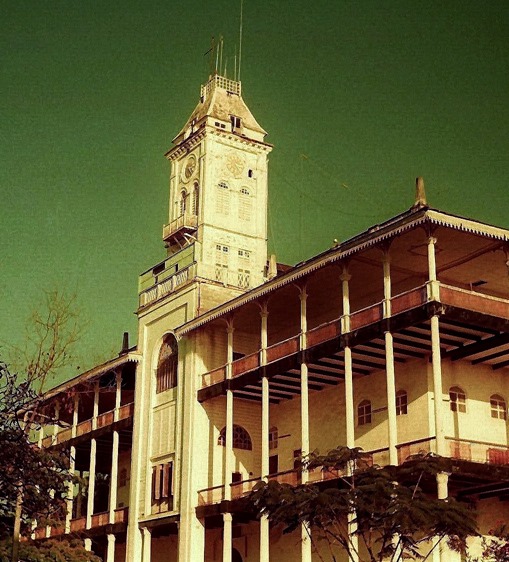 Beit al-Ajaib, The House of Wonders, was built by Sultan Barghash in 1883 to host ceremonial events. He was an extravagant man and, before his death in 1888, built 6 palaces across the island of Unguja. After the 1964 Zanzibar Revolution when the Omanis, along with many Indian residents, were killed or expelled, the building was used as government offices. When we visited in 1999 it was abandoned, but for one of the last sultan’s  cars (candy pink in colour) parked inside the atrium near the front door. A good friend who visited the House of Wonders recently tells me it is still there.

Trade was given much impetus in 1830 when the Sultans of Oman moved their capital to Zanzibar to oversee what turned out to the short-lived boom in clove production.  They and other Indian and Arab landowners owned many clove and coconut plantations  on the archipelago, and these were worked by African slaves.

The slave trade, then, was another source of the island’s prosperity. By 1860 the archipelago had some 60,000 slaves, not only working the plantations, but also fulfilling domestic and labouring tasks, and providing new wives for the sultan’s harem. And it is worth noting here that the slaves in Zanzibar were not generally ill treated in the way they were in the Americas; it was not unknown, after long service, for them to inherit their master’s land and property. The children of the harem slaves were also acknowledged by the sultans who fathered them, and treated as royal children with appropriate titles.

During the 19th century it is reckoned that some 50,000 slaves a year were being sold in the Zanzibar slave market. It was only in 1873 that the slaving was abolished, this after much pressure from the British who had first made a treaty with the Sultan Said in 1822 in an  attempt to kerb the trade. That treaty had produced little effect. There was too much demand. The French, in particular, needed slaves for their tropic island plantations.

And to meet the demand the Swahili and Arab slaving expeditions would set off from Zanzibar for the African mainland, taking their caravans of porters along well-walked slave paths through Tabora in Tanzania, and down into Zambia, or travelling up present day Kenya to the Great Lakes regions. The notorious Swahili slaver, and plantation owner, Tipu Tip, roved as far as the Congo , terrorizing villages across the territory.

Finding some way to end the trade was one of the motivations that drove the missionary-explorer David Livingstone ever onwards on his gruelling explorations across Africa. It was thought that if the continent was opened up to civilizing Europeans, then the ‘filthy trade’ could be stopped.  But then like the slavers, he and other European explorers (Burton, Speke, Stanley, Cameron, Thomson) started their journeys from Zanzibar. All such travellers, including  missionaries, relied on  the expertise of porters and seasoned safari guides who otherwise worked on the slave caravans.  In 1866, before his last expedition, Livingstone stayed at the house above. It had not long been built by Sultan Majid. Now it is the office of the Zanzibar Tourist Corporation.

The slaving and ivory  trades worked in tandem. Newly captured slaves were not only driven on forced marches across the continent to the coast, but they were also made to carry supplies, and these included any elephant tusks that the slavers had procured – ivory destined for the production of piano keys and billiard balls for the European market.  It was only in 1897 that all slaves on Zanzibar were given their freedom. The Anglican church stands on the site of the slave market, beside the now famous sculptures commemorating the years of abuse. It is horrifying to consider what the cost of this trade has been for Africa: generation upon generation of  the strongest, brightest and  most  beautiful young people robbed from their communities.

Naturally the British could congratulate themselves on finally stopping the trade on Zanzibar, although I believe it continued well  into the 2oth century at Lamu. Today, too, slave mongering thrives, and under our very noses in Europe, only now the abused are not necessarily black, so perhaps we don’t think it’s the same thing – the brutal deprivation of liberty and dignity, along with forced labour?

But back to 1890, the end of the Sultans’ control and Britain’s laying claim to Zanzibar. Because now we come to a whole new angle. For this was also the year of the Heligoland-Zanzibar Treaty, an agreement between the Germans and the British, whereby (in return for Heligoland, the strategic North Sea island), the Germans waived rights to Zanzibar, Witu on the mainland coast, and to the territory now known as Kenya across which the British were planning to build the Uganda Railway. (Bismarck apparently called this deal swapping the trousers for a button).

Suddenly, then, Zanzibar has a very particular purpose for the British Empire. It will become the spring board for the claiming of extensive East African territory, and it will start with that mad, mad railway from Mombasa to Lake Victoria. Of course, with slavery being outlawed, some new mechanism of harnessing native power will need to be thought up. Something civilized and civilizing. I know – we’ll call it colonialism, and enclose indigenous people in their own territory, make reserves of their own homes, which they can’t leave unless they have a pass. Then we’ll introduce hut and poll taxes so forcing them to work for Europeans…

For more of the colonial story go to an earlier post Vulcanicity HERE. In the meantime below are some more soothing views in and around Stone Town, now a World Heritage site. Life is not so grand as it was in the days of the finely robed Omanis. Fishing, ferrying, farming (growing spices, coconuts and vegetables), curio trading, boat building, mangrove pole harvesting and tourism are the main sources of income. As in all African countries, people work hard to educate their children, and this is their number one priority.

Stone Town is also a devoutly Muslim community, and sometimes this does not sit well with tourist inclinations to behave in ways not considered either respectful or respectable by Zanzibaris. There are over 50 mosques of several different Muslim persuasions, but most are unobtrusive buildings without minarets, and are scarcely noticeable among the domestic dwellings. There is also a Catholic cathedral as well as the Anglican church. The streets are maze-like and shadowy, but we met with nothing but gracious hospitality when we wandered along them.  The place may seem run down (although here and there restoration is in progress), but in the sudden whiffs of jasmine the Sinbad romance lingers on…

(For more about the Swahili see an earlier post HERE.) 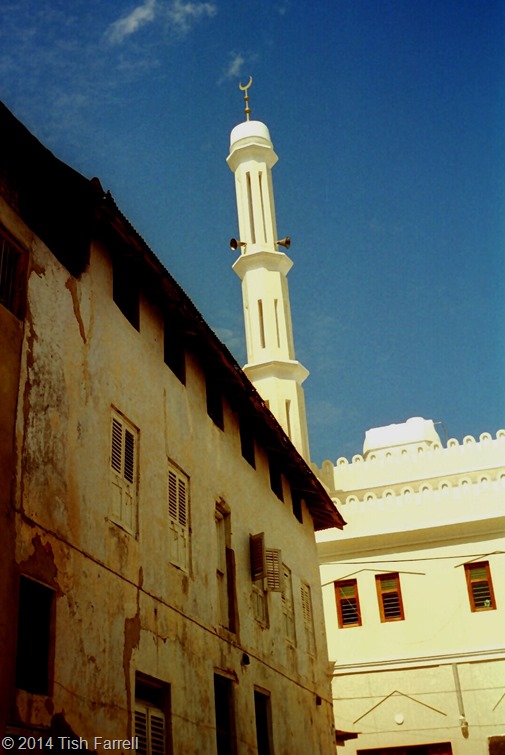 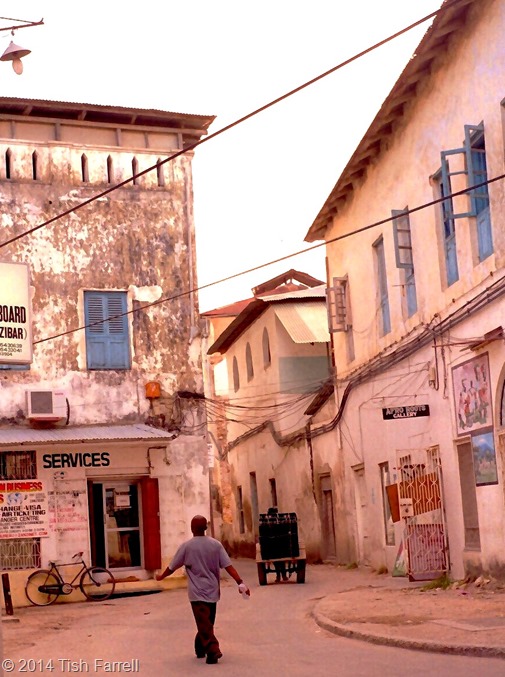 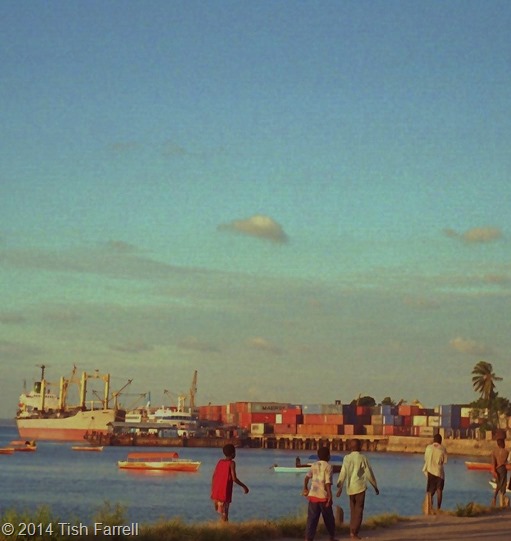 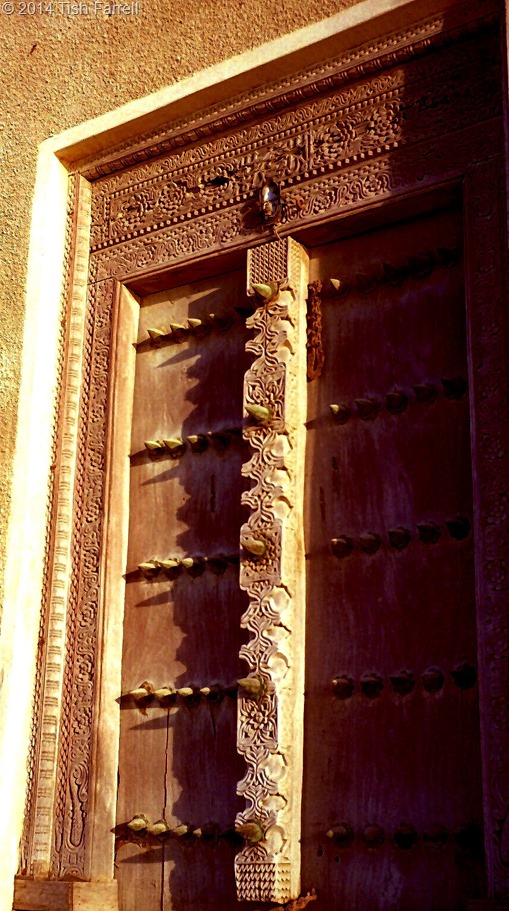