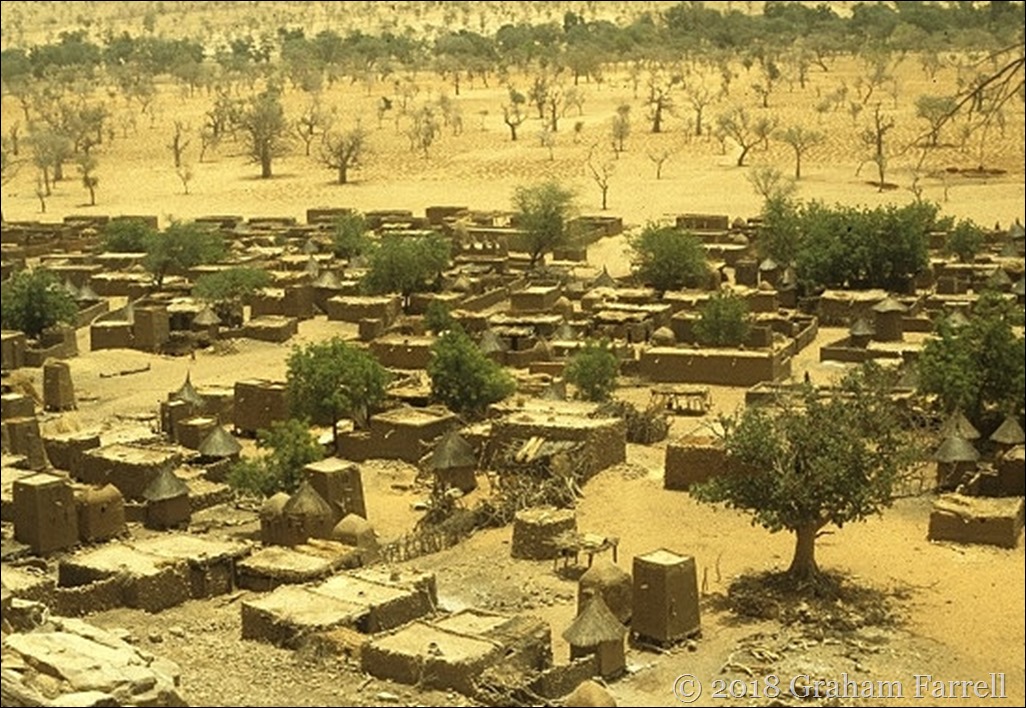 The Dogon people of the Bandiagara Plateau in Mali, West Africa have an extraordinarily complex cosmology that informs every aspect of their socio-sacred lives. First communicated  by Dogon elders to French anthropologist, Marcel Griaule, in the 1930s, it reveals, in particular, some astonishing conceptions relating to the star Sirius and of its smaller orbiting star now known to be a white dwarf and referred to by astronomers as Sirius B. The circumstances of how the Dogon may or may not have known about this invisible star companion have been hotly debated in recent years, and I’m not going into it here.  Instead, here is my very simplified version – or at least as far as I have grasped it – of how the universe began. Apologies to the Dogon for any error in my understanding:

Of the Cosmic Egg and Pale Fox

In the beginning, so the Dogon people say, there was the giant egg, aduno tal. One day, for no reason that anyone knows, this egg began to pulse inside. Seven times it shook, and as it shook, it started to break open in a spiral until the shell expanded to the ends of the universe.

Thus was creation born and ever since, the Dog Star, Sirius has marked the place in the sky where it all began. The Dogon also say that it is the small star orbiting Sirius, the smallest, heaviest star that holds all the essence of the universe. Its movement on its own axis and around Sirius supports all of creation in space. They call it the fonio seed, which is their smallest grain, and in this way explain that the creative force of the universe exists in both the biggest thing, the giant egg aduno tal and in the smallest thing, kize-uzi, the fonio seed.

After the seven pulses of aduno tal, the Creator God, Amma, appeared and he made the sun and moon from discs of clay, and the stars from clay pellets thrown out in space. He also created spirit beings in the shape of two sets of male and female twins.

However, something went wrong in the making of the first pair of twins. The male was born before his due time and without his female twin, and as he broke from the egg, a piece of his birth-sac flew off into space and this became the Earth Mother.

This first son whose birth created the Earth was Yurugu, the Pale Fox. He was a rogue and trickster and he was also very jealous of Amma’s creation. He decided to take the Earth Mother for himself and make it even better than Heaven. So he fled there with kize-uzi, the fonio seed, which he meant to sow in the earth. But with all the bad beginnings, things did not go well for Pale Fox. The Earth remained in darkness and was dry as dust so nothing could flourish. At last Yurugu saw that the world would never be complete and good without the presence of his twin, the female soul.

So Pale Fox went back to Heaven to find his female twin and bring her back to Earth. But Amma, the Creator God, was angry at the way Pale Fox had interfered with his plans for making the universe and banished his first son back to Earth, where ever since he has roamed in darkness in the dry desert places, searching for his female twin.

The second set of twins that Amma made were the creator spirits called Nommo and these represented all the twinned things of the universe: male – female, right – left, order – disorder, high – low, odd – even, good – evil. Their upper bodies were human and their lower bodies like snakes. They had flowing green hair and were made of water, and glowing light, and all the essence of creation.

When these heavenly Nommo twins looked down from the sky they were sad to see the Earth Mother so disordered and naked. At once they collected many cosmic fibres that were full of life forces and went down and clothed the Earth in green just as if she were a woman. Also in these cosmic fibres were the first words ever to be known in the world.

Now the Earth Mother could speak, but not for long. For when Pale Fox learned of the Earth Mother’s new power, he wanted it for himself. One day he crept up on her and stole her skirt of heavenly fibres. In this way Pale Fox stole the word and ever afterwards has known the power of language and been able to reveal the plans of Amma his Creator father.

When Amma saw that his son, Pale Fox, still meant to spoil the Earth, he decided to create four more sets of male and female twins who would become the ancestor spirits of mankind and live on the Earth according to Amma’s plans. Most of all, Amma wanted to restore the imbalance in things that Pale Fox’s evil deeds had created. So although the ancestor spirits were born in an anthill inside the Earth Mother, they next had to travel up to Heaven to receive their father’s instructions for their future lives on Earth.

When the eight ancestors arrived in Heaven, Amma then gave each of them one of the eight grain-seeds that are grown by the Dogon people. He also gave each one some special knowledge such as agriculture, healing or divining, or a craft such as minstrelsy, iron-working, woodcarving or weaving. But to the first and oldest ancestor he also gave a granary made from a clay-lined basket that was shaped like the universe.

But just as Amma thought his plans were going well, the first ancestor who had received the granary stole a piece of Sun from the celestial smithy and hid the glowing coal inside some bellows. As he fled from heaven with the stolen fire, the Female Nommo tried to stop him with a lightning strike and the Male Nommo hurled a thunderbolt at him, but the thief saved himself by holding up the bellows. Then he escaped by sliding down a rainbow, and so brought the first fire to the Earth. Tumbling after him came Amma’s granary, which smashed on the ground, spilling out people, animals and vegetables across the world.

And so this is how the world began. But it then took Amma and the Nommo another twenty two years to order the universe so that everything was in balance. Meanwhile down on Earth, the Dogon people who descended from the four sets of twins have ever afterwards tried to order their lives according to Amma’s plan for the universe. This means that in building their homes and villages, or in the laying out of their fields, everything mirrors the spiral of the great cosmic egg as it began to pulse. But whenever they want to know what future Amma has in store for them, it is to Yurugu, the Pale Fox that they turn. For he stole the Word and can reveal Amma’s plans.

At sunset the Dogon men go out on the barren hillsides near their villages and draw a fortune slate in the sand. Then the following dawn they return and interpret their fate from the tracks that Pale Fox has left on their slate during the night. And though Yurugu still wanders the wilderness in darkness looking for his lost female twin, he also performs this important service for mankind. And for this at least, he is highly respected by the Dogon people.

Apologies too for the poor quality of these photos. The original slides are sharp enough, but they have not stood up to the scanning replications. Graham was in Mali during the 1980s – one destination among many on an Africa overland trip.

Now here is Marcel Griaule’s description of a Dogon village from Conversations with Ogotemmeli: An Introduction to Dogon Religious Ideas (OUP 1965). In 1946, Ogotemmeli, a Dogon elder who had been impressed by the seriousness with which Griaule had treated earlier revelations of Dogon belief, summoned him to his home in the village of Lower Ogol, and over 33 successive days set out to elucidate the Dogon world view.

Lower Ogol, like all Dogon villages, was a collection of houses and granaries all crowded together, flat roofs of clay alternating with cone-shaped roofs of straw. Picking one’s way along its narrow streets of light, between the truncated pyramids, prisms, cubes or cylinders of the granaries and houses, the rectangular porticoes, the red or white altars shaped like umbilical hernias, one felt like a dwarf lost in a maze. Everything was mottled by the rains and the heat; the mud-walls were fissured like the skins of pachyderms. Over the walls of the tiny courtyards might be seen, under the floors of granaries, fowls, yellow dogs, and sometimes great tortoises, symbols of the patriarchs.

David Attenborough series The Tribal Eye 1975  episode 1 Behind the Mask visits a Dogon village. Etnografia has posted the other episodes in this classic series – made in the days of serious attempts to understand other people’s beliefs and culture.

64 thoughts on “How The Universe Began ~ The Dogon View”