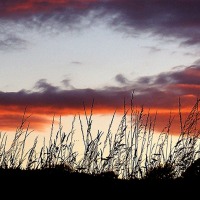 It has to be said that wolf farts are pretty hard to find, even with expert guidance. And yet I had been led to believe (and by the Guardian no less) that if I visited a certain, well-known location near me, I would most surely discover them. And so, on a sunny winter’s day last week, when I set out on the curious quest, I was not anticipating difficulty. Far from it. The ground was dry underfoot and visibility good and I had been well primed by Paul Evans’ Wenlock Edge column (Guardian 10 January 2012) which not only gave me full details of said quarry, but also included a very good photo for accurate identification. The piece seemed unequivocal too. Wolf farts were to be found on Windmill Hill, and in January too. What prospect could be more beguiling for the writer-prevaricator, and especially in the after-Christmas lull when not much is happening in the natural history line? So I pulled on boots and woollies and set out in search of them. It’s amazing how many ways there are to avoid writing the novel.

Finding Windmill Hill is the easy part of the enterprise. The old stone tower on its summit makes it a striking local landmark, though something of a mystery since there is no record of how this tower looked when complete and few clues as to what kind of windmill it once was. The limestone ridge on which it stands, with the disused Shadwell Quarry at its back, is a five-minute walk from my house. You can reach it either by striding across the Linden Field beside the new William Penny Brookes School, or you can follow the path beneath the towering limes of the Linden Walk. The trees form a cool sweet-scented arch of greenery in summer and Doctor Brookes, a trained herbalist and therefore well versed in the calming properties of lime flowers, planted them there over one hundred years ago. According to tree experts the limes could last another hundred and fifty years, although they wag their fingers at local cricket enthusiasts who, in season, drive over the roots while parking their cars for a good view of Sunday cricket on the Linden Field. The case of trees versus cars is guaranteed to raise tempers in the town.

The Linden Field once belonged to the Gaskell family, the town’s local worthies who lived in the Abbey beside the ruined Wenlock Priory, but in 1935 it was bequeathed to the people of Much Wenlock for their enjoyment and recreation. That the townspeople have problems hanging on to their rights as beneficiaries is another source of local irritation. But then the most important fact about the field is that it is the site of the Wenlock Olympian Games. These were begun in 1850 by the town’s doctor, William Penny Brookes, in a bid to improve everyone’s health and wellbeing, and later provided Baron Pierre de Coubertin with the model for the modern Olympic Movement. People argue about this too, but at the top of the field is the oak tree planted in 1890 to commemorate the Baron’s reconnaissance visit to the town to see the games for himself. Today, visitors who come to the field say there is nothing to see in the Linden Field. But then that’s history for you; invisible for the most part. However, should the see-nothings feel like returning between 12-15 July 2012 they will find the 126th Wenlock Olympian Games in full swing, with a wide range of serious athletic contests to be watched and enjoyed.

The old Penny Brookes games also included all the familiar events – pentathlon, archery, football, hurdles and long jump (called the running long leap), but there were also bicycle races on penny farthings and tilting at the ring, a mediaeval jousting sport wherein a galloping horseman speared a ring with his lance. Prizes were lavish with olive wreaths to crown the victors and Dr. Brookes himself designed and paid for the gold and silver medals. Then there were also the fun events – blindfold wheelbarrow racing, climbing the greasy pole and chasing the piglet. Something for everyone in fact and not a hint of a risk assessment. As might be expected, the games were hugely popular and spectators and competitors came from far afield, many arriving by train, since the line ran conveniently beside the field. And for those who wanted the best possible view of the games, then Windmill Hill provided the perfect spectator vantage point.

Which brings me back to the wolf farts. Not forgotten, but by the time I’ve hiked up the steep hill to the windmill, I’m a little out of breath and thinking I need to get into training, perhaps with some piglet chasing?  I begin to comb the limestone meadow that was cropped in autumn by a fleet of russet-coated Shetland ponies. This is where the wolf farts are supposed to be. Somewhere. It’s not a very big hill after all, and I can walk across the top in less than two minutes. I scour the northerly slope first, rooting among the weathered pony droppings and coarse vegetation from which, in late spring, will sprout spotted purple orchids, and later, agrimony, harebells and knapweed.

I decide that Paul Evans has been pulling my leg, but anyway work my way back in a southerly direction. And this is what I’m looking for:

the common puffball, Lycoperdon (from the Greek lycos wolf and perdomai to break wind). It has other names too, including the devil’s snuffbox. And finally I get my eye in. I had been seeking something altogether too substantial, imagining the white, marshmallow-like fruiting bodies of autumn. In fact the first one I find is quite tiny, paper-thin and bone coloured, the size of my fingernail. Then there are others – cigar coloured, a couple of centimetres across and yes, very like Shetland pony droppings. They are empty husks now, barely clinging to the thin soil, their spores spent, leaving tiny orifices like shocked little mouths. Then I find one still containing some spores and squeeze the sides. Out puffs the brown-black dust, as fine as photocopier ink. Later I read that inhaling too many spores can lead to lycoperdonosis, a life-threatening respiratory condition caused by the spores lodging in the lungs.  Won’t do that then. Won’t breathe them in. And that seems all there is to be said and done concerning wolf farts. Quest done, I lose interest, stand up and survey the old quarry behind the windmill. There’s a deep pool of unearthly blue water, apparently some seventy feet deep, and the surrounding land is going to be developed with holiday chalets and a dive centre. It’s then, as I’m looking for signs of building work, that I see large segments of the quarry have been staked out with low green plastic fencing. Later I discover this is newt fencing. Why it is there is another story, one that I don’t entirely believe – something to do with separating opposing amphibian gangs and newt fights. Oh come on! At this rate I’ll never get back to the novel. It’s far too exciting outside.