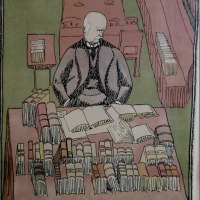 Grey days in Africa can be incredibly dull. It is a strange effect: as if the light has been sucked out, but without it actually turning dark. This photo was taken around noon on a July day – Southern Africa’s winter. The sky weighed down in a way that was almost palpable; like walking through a Welsh sea mist, except it was dry; or as if you were looking at the world through gauze.

We had driven down from Lusaka in Zambia to spend a couple of weeks exploring Zimbabwe. The objective was to meet up with two Kiwi friends who were flying into Harare, and take them sightseeing before heading with them (via Victoria Falls) back to our house in Lusaka. The day this photo was taken we had just spent the night in one of the guest bungalows in Hwange National Park, and assembled a picnic of sorts in the Park shop.

Hwange Park has metalled roads which detracts somewhat from the notion of wild Africa, and so whenever a dirt track presented itself we took it.  Even so, we saw very little game apart from some kudu. It was mostly dry bush, and more dry bush, which soon grew rather boring. In the end we pulled up by the dwindling waterhole in the photo, and ate our lunch.

The waterhole had been empty when we arrived, and then quite suddenly, as is usually the way with elephants, this small family group appeared. The photo looks like a water colour, or a colour plate in a vintage travel book. I only had my little Olympus Trip, and I often had it on the wrong setting. But the other thing about elephants (and I think this image captures it) is that even when you are there, and can see them with your own two eyes, and are close enough to catch a whiff of their musky hides, it is still hard to believe in them. They come and go like mirages, walking always on the tiptoes, their heels supported by fatty pads that deaden the sound of their footfalls. It is thus very easy to be sneaked up on by an elephant.

Of course if they’ve decided to do a little tree felling, since they like to clear land to encourage their favourite grass to grow, or are seeing off some deemed intruder, then you hear them alright. Indeed, there is nothing quite so alarming as a trumpeting matriarch, clearing a waterhole of potential threats to the family’s infants. On this day, though, all was dreamy peacefulness, and concluded surreally enough in the Game Reserve Hotel at Dete where we were the only guests, and the only food on the menu were pieces of very tough meat  that took an hour to chew. 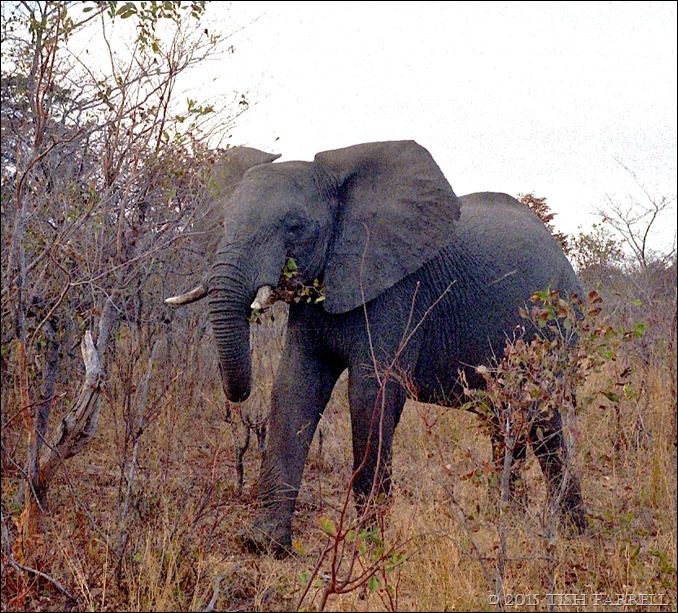 The next day, though, we woke to a new kind of dream – golden sun through a mist of coal dust that hangs like a heat haze over the vast Hwange Coal Field. And so we quickly turned our noses from the industrial smog and headed for the border and Victoria Falls.