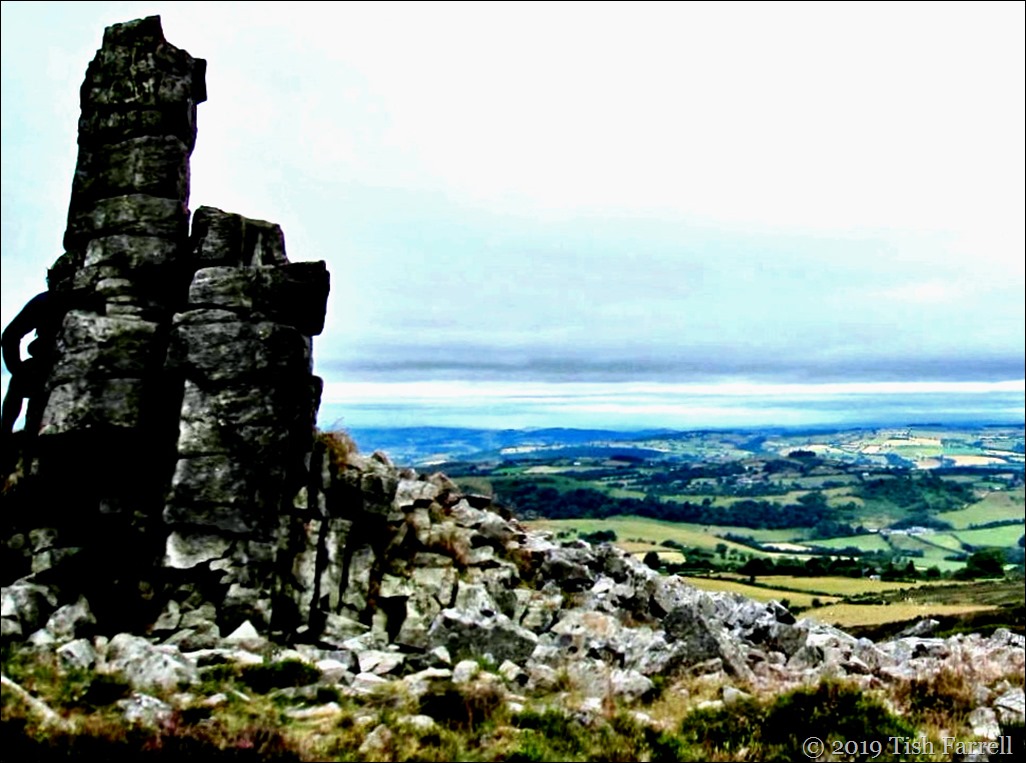 Well, the name alone is enough to set the nerves jangling. Stiperstones. There’s more than a hint of menace here, and local Shropshire folk will tell you exactly what that menace is. They will say that when the mist settles on this ridge of strange and craggy outcrops, that the devil has come, returned to his quartzite throne to preside over a gathering of witches and evil spirits. 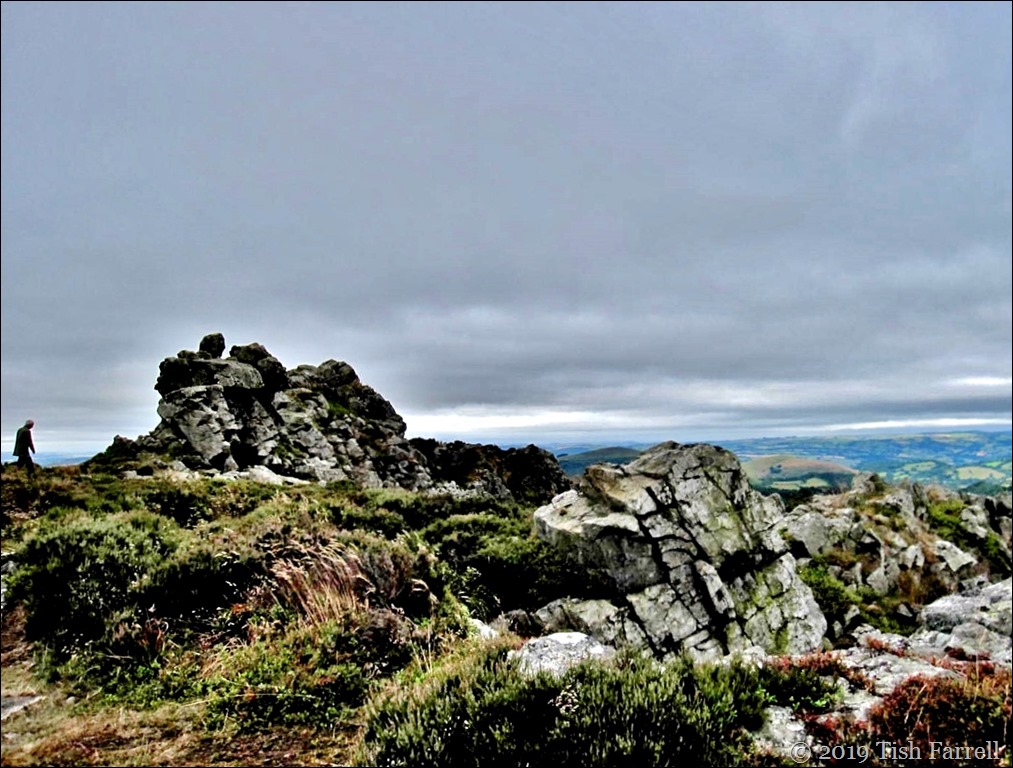 These photos were all taken on a summer’s day, though it’s hard to believe looking at them here. For more about that particular visit and more about the Stiperstones go here.

Lens-Artists: creepy  Ann-Christine has set the challenge this week. She has posted some marvellously creepy images. Please take a look. 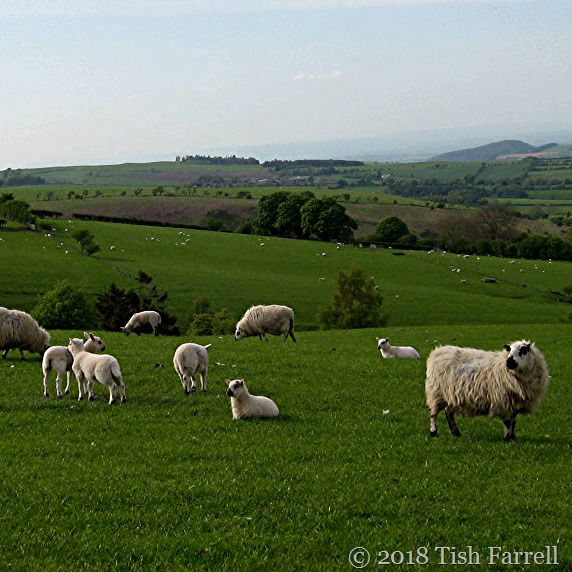 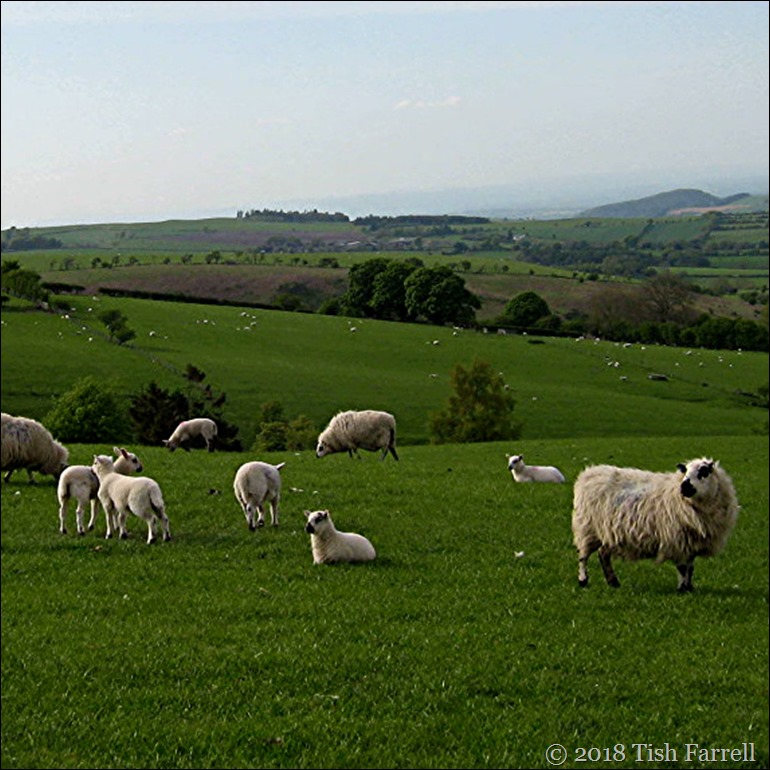 Well I can see some. Can’t you?

Oh all right. Here are some more spottable ones – as seen from the Stiperstones on the day of our recent sin eater quest. The hill in the background is the Long Mynd – a small segment of its westerly flank.

This photo was taken at Snailbeach Mine in the wilds of the Shropshire Hills. From the 1780s through the nineteenth century this was the most productive lead mine in the world, employing over 300 workers. But the history of lead mining in the area is much older than this, and for centuries the mineral was mined all over the nearby Stiperstones hills.

The Romans were certainly here. They left behind a great lead ingot weighing over 87 kilos and impressed with the inscription ‘IMP HADRIANI AVG’. This meant that not only did it belong to the Emperor Hadrian, but also that Snailbeach was an imperial mine between the years of his rule, 117-138 A.D.

The Romans used lead for water pipes, cooking vessels, paint and to sheath the hulls of ships.  Of course some of these purposes proved highly toxic to the users.

And it is now hard to imagine an association between something as hard, industrially wrought and poisonous as lead and these delicate harebells that seem to thrive on the waste ground near the mine ruins. In fact this whole area, with conservationists’ help,  has been so reclaimed by wildlife it is now part of the Stiperstones Site of Special Scientific Interest. The birdlife of the area includes red grouse, ravens, buzzards, peregrine falcons, curlew and the rare ring ouzel. There  are grayling and green hairstreak butterflies, fox and emperor moths. The vegetation includes heather, cowberries, whinberries and rare mountain pansies.

It is so heartening, isn’t it, when so much on the planet seems environmentally challenged. Here in this corner of Shropshire at least, the natural world has overcome – reclaiming this once poisonous, highly industrial environment. 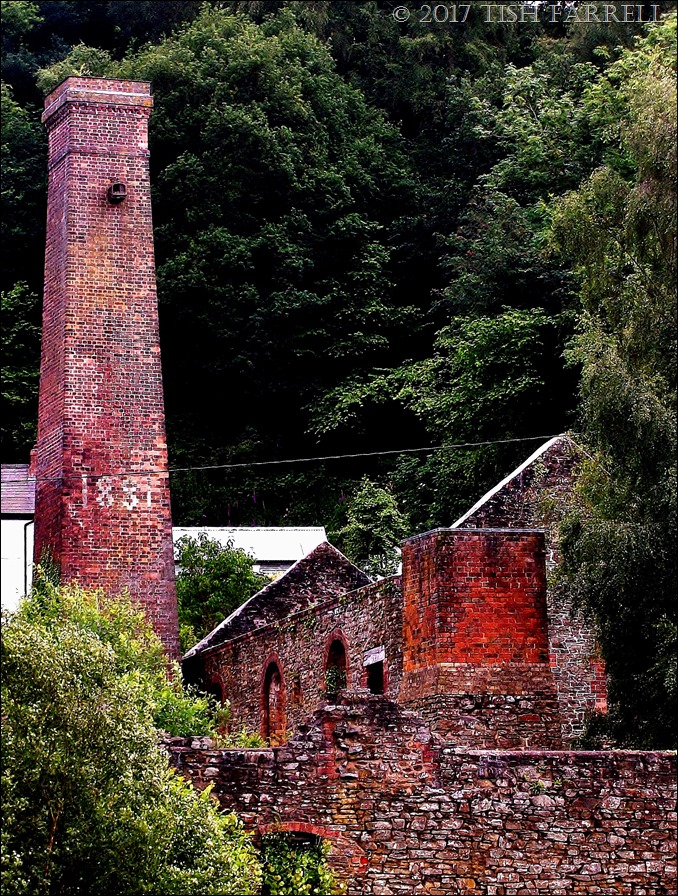 For those of you interested in mining history there is more about Snailbeach HERE and HERE. The latter link includes lots of useful teaching information and has a great video of aerial views of the area, which is anyway worth a look if you want to see more of this fascinating part of Shropshire.

Anyone who saw July’s To The Mysterious Stiperstones post might just recognise those distant heather-covered hills. Last month they were captured under looming skies, but this was how they looked yesterday when we went to Wentnor.

This off-the-beaten-track South Shropshire village must have some of the best views in the county – the Stiperstones to the west, and the Long Mynd to the east, and nothing but rolling farmland in between. The nearest towns are Church Stretton and Bishops Castle (6 and 5 miles respectively) but take note: Wentnor miles are at least twice as long as other people’s miles. It is a world all its own. 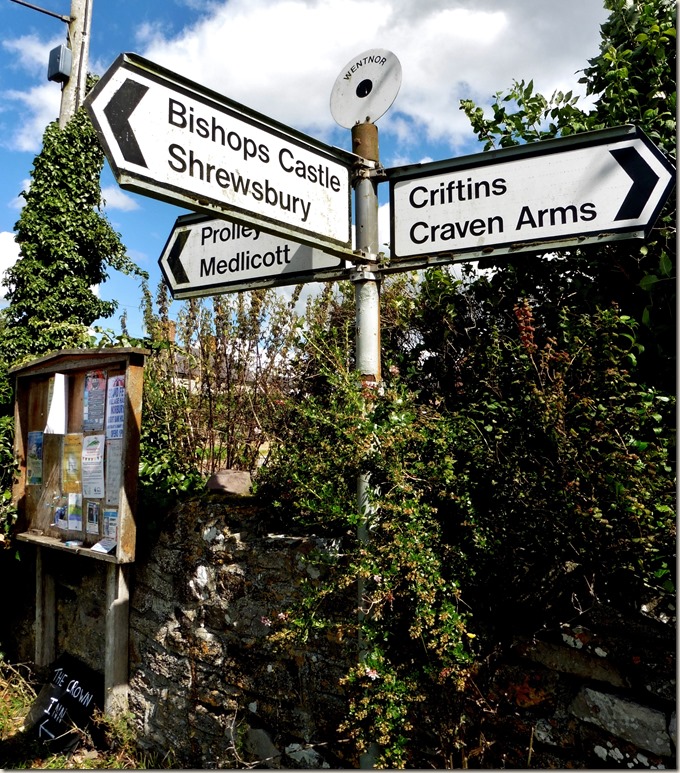 Coming up next is a glimpse of the Long Mynd looking east from the village. The name, unsurprisingly, means long mountain. It does not allow itself to be photographed in one shot.

And here’s the northerly end, taken from the car park of the village pub:

Talking of which, this was the objective for the outing – lunch at The Crown at Wentnor along with our best Buffalo chums, Jack and Kathy. The last time we four had been there, Graham and I were still living in Kenya, and only briefly in the UK on annual leave. We decided it had to be a good twenty years ago. How time flies. 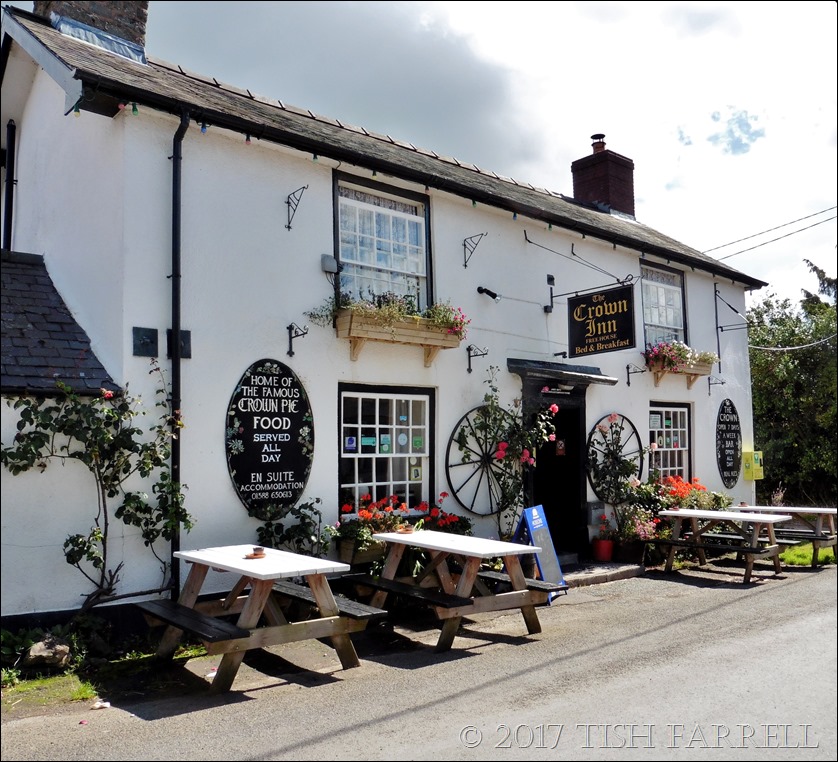 After lunch we wandered about the village, and paid a visit to the parish church of St. Michael. None of us are subscribers, but when out together we often seem to find ourselves in country churchyards. Besides, Wentnor church is welcoming, and vistas within and without most picturesque. In fact I was so taken with the charm of the kneelers along the pews,  I thought I might even like to join the people who had made them in a spot of hymn-singing – All things bright and beautiful of course; nothing like some tuneful gratitude as harvest festival time approaches. 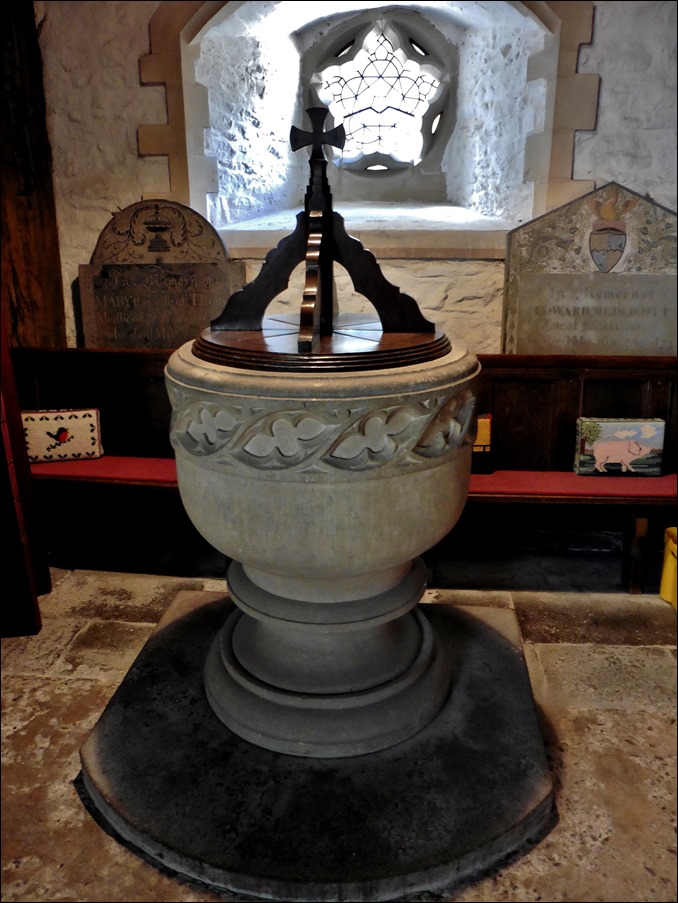 The church was rebuilt in the 19th century, although parts date from the 12th century. I was particularly struck by the craftsmanship of the ceiling, and have never seen anything quite like it before. It made me think of the ornate wooden Viking churches of Norway.

Out in the churchyard with its ancient spreading yew, there were views of the Long Mynd and the hills towards Clun and Radnorshire: 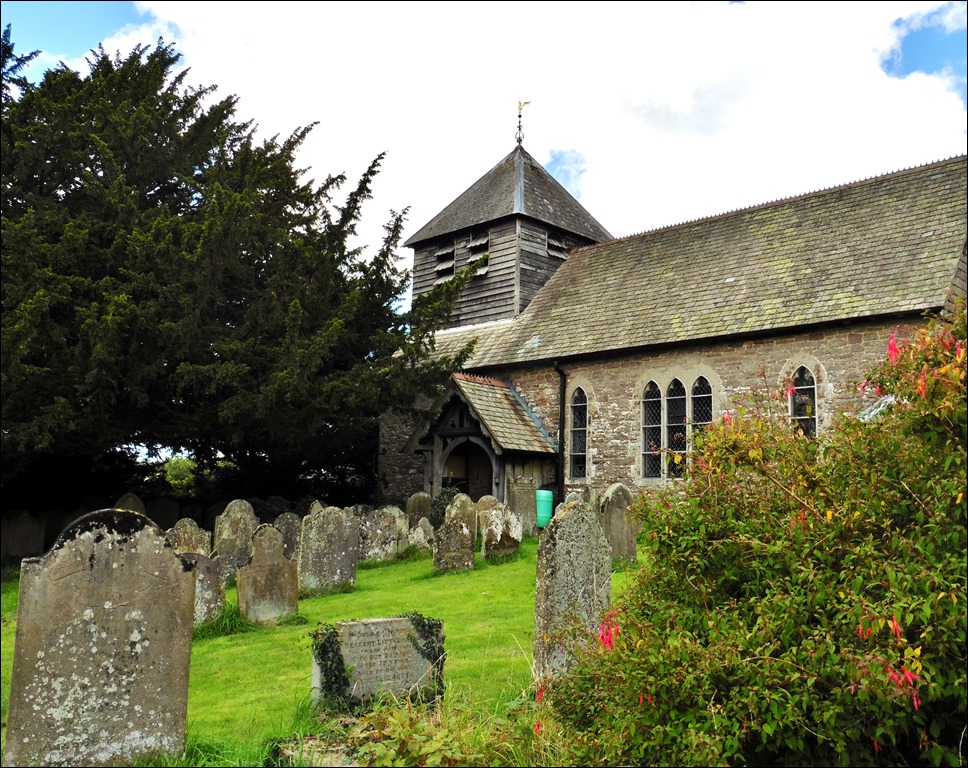 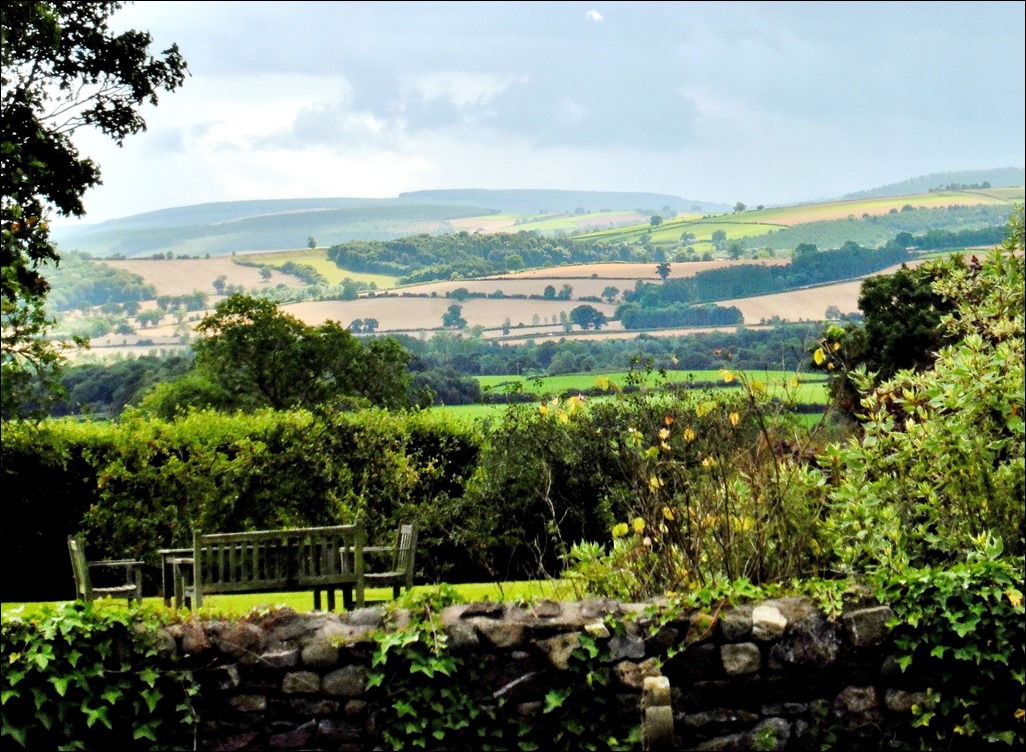 And it was all so very quiet with few signs of the locals as we wandered up and down the lane; only a couple of horses waiting for new shoes from the travelling blacksmith, the village noticeboard, old barns and cottages. And then the skies turned threatening and it was time to leave, back to the real world beyond the Mynd. 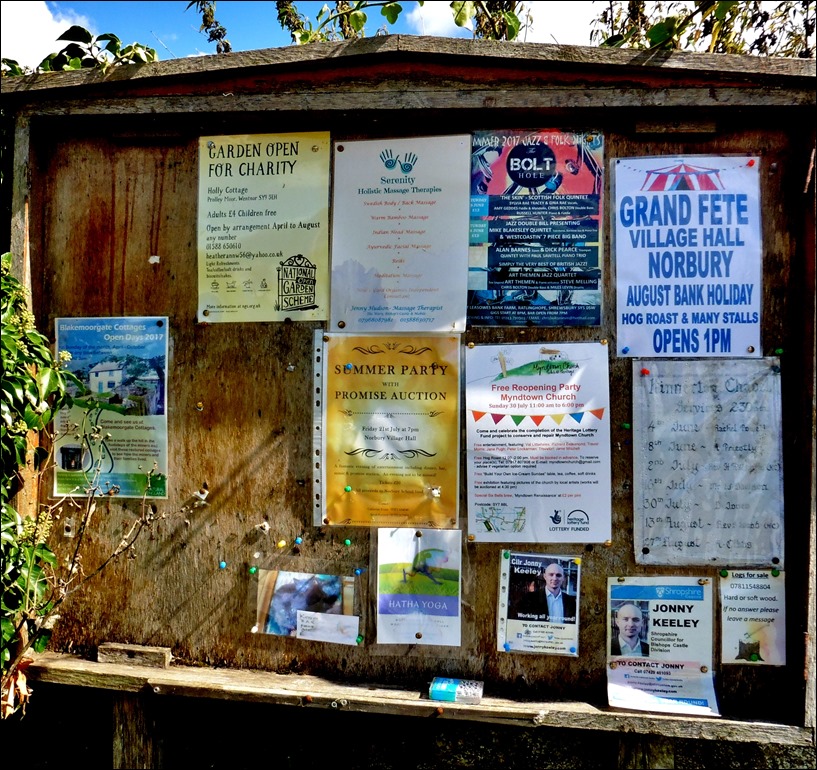 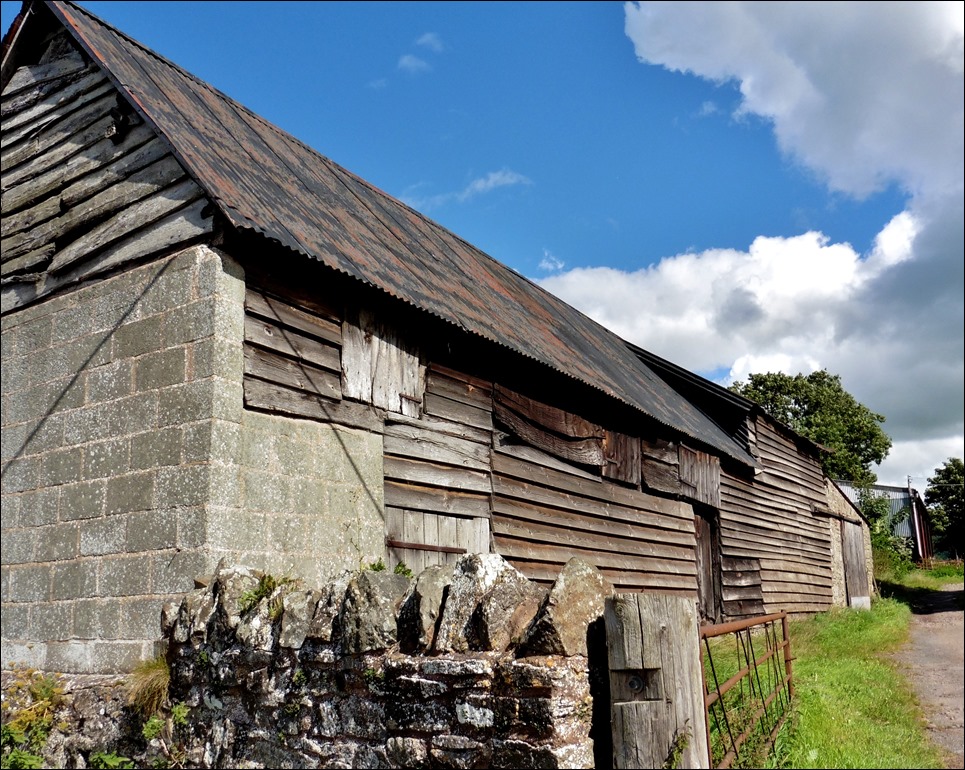 N.B. The title quote is from A E Housman’s A Shropshire Lad  no. XL

Into my heart an air that kills

What are those blue remembered hills,

What spires, what farms are those?

I see it shining plain,

The happy highways where I went