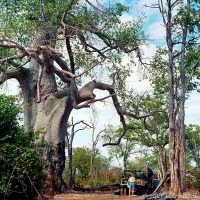 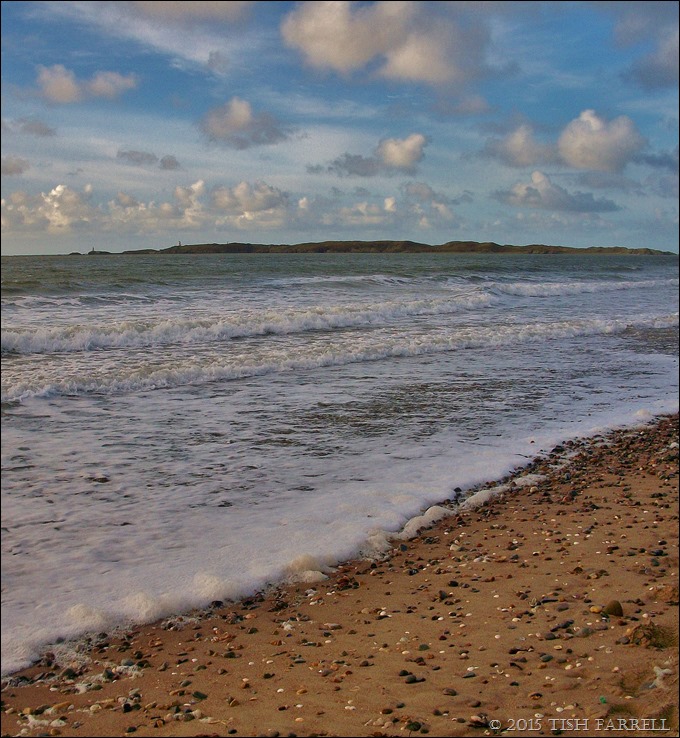 Christmas morning and we find ourselves in a general pilgrimage of families and dogs. We have all had the same idea: to trek along Anglesey’s Newborough Beach to Ynys Llanddwyn, the island sanctuary of Dwynwen, Welsh patron saint of lovers.

As you can see, the day was brilliant, but down on the shore the wind was bitingly cold. It was a challenge to take photos, but taken they must be. For one thing, the views across the Menai Strait to the mainland’s Llŷn Peninsula were mesmerizing, and had to be captured.

For another, there were some rather shocking scenes of coastal erosion. I promise, though, when we reach the island I will tell you the story of Dwynwen.

First things first. Newborough Beach is some two miles long and ends at the promontory that forms Llanddwyn Island. It is famous for its dunes which apparently arrived there in the great storm of 1331. It was the Feast of St Nich0las (December 6) when the disaster struck, and on that day the wind and sea rose to such a pitch that they drove, from the shores across the Strait, great mounds of sand and deposited them on the once fertile fields and dwellings of the medieval Newborough.

Ever since, many of the dunes have continued to shift, although there have been various strategies to stabilize them. In the sixteenth century marram grass was planted, and this gave rise to a successful local industry wherein the grass was cropped to weave into mats and baskets. Far more recently, in the 1940s, the Forestry Commission planted the promontory with conifers. The small forest that has thrived there since is home to ravens and red squirrels.

Now, though, there are new threats from the weather. Last winter severe storms lashed the Welsh coast, causing great damage and much local concern about a future where rising sea levels and erratic storms are likely to figure more prominently.

It is a simple demonstration of the power of weather, and instead of arguing about its precise causes we should perhaps be wondering what is best to be done. At the present, the people of Newborough are doing just that. There is an on-going public consultation as to how the forest and nearby salt marsh may be protected. This whole corner of Anglesey is a much treasured resource to locals and visitors alike.

Meanwhile, sister Jo’s labrador Molly is hardly concerned with matters of coastal erosion. Nothing a dog likes more than sand in its paws, wind in its ears, some smelly crabs and dead fish to nose, and also to lay claim to everyone else’s stick.

When we reach the crossing place to the island, the tide is still too high to walk across. So we ponder the rocky deposits of pillow lava, that were apparently blown up from undersea volcanic eruptions in the Precambrian era, and wonder if Dwynwen really did choose this exposed promontory for her sanctuary some fifteen hundred years ago. There is no doubting the elevating beauty of the place. 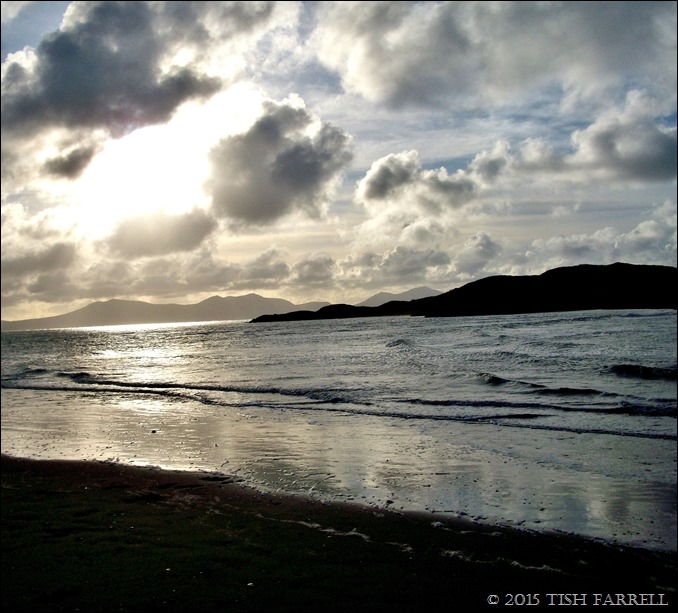 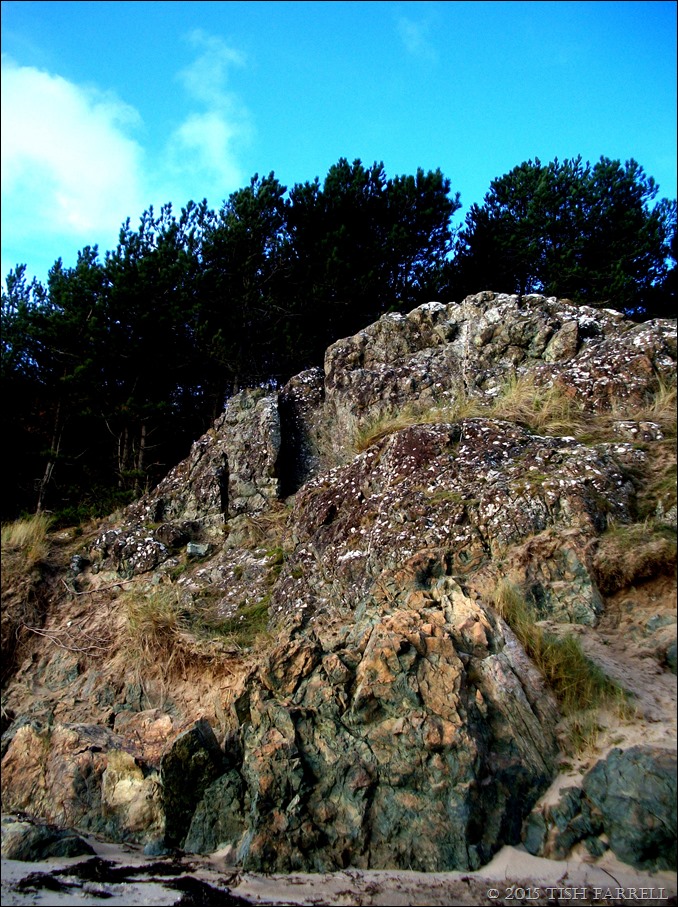 And so, as I promised, to Dwynwen’s story. She lived in the fifth century CE, and was one of Prince Brychan’s twenty four daughters. She fell in love with a young man called Maelon Dafodrill who apparently returned her feelings. Yet in a fit of caprice, Dwynwen refused his proposal of marriage. Some say it was because she wished to remain chaste. Others say it was because her father had arranged for her to marry another man. For his part, Maelon made his displeasure at the refusal known by spreading tales that cast doubt on Dwynwen’s honour.

In a frenzy of anguish, she thus took herself off alone to a wood where she prayed to be cured of her passion. And so it was that an angel appeared to her in a dream and gave her a potion that not only erased her feelings of love, but also transformed the spurned lover into a block of ice. Heaven also granted her three wishes. Dwynwen thus asked that Maelon be unfrozen. She then requested that if any true-hearted lover invoked her name, they should be granted their heart’s desire or relieved of their painful emotions. Finally, she sought never to be married, and thence withdrew from the world, founding a convent on Llanddwyn Island which, after her death in 465, became a place of pilgrimage. Her feast day is 25 January, and is celebrated by many in Wales with cards and flowers in the same way Saint Valentine’s Day is marked in many European countries. 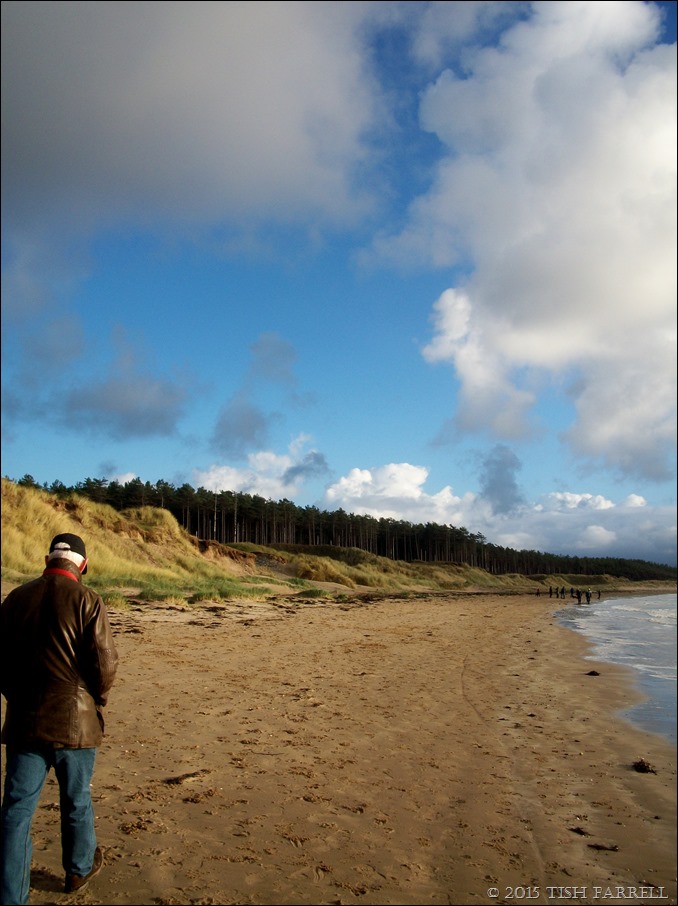 And so unable to complete our own pilgrimage and reach the island with its ruined church, we retraced our steps, thinking more profanely of a turkey to be roasted, presents to be opened, and a glass of champagne to drink.

And it was under this patch of marram grass, as we left the beach, that my Kodak EasyShare gave up the ghost. You could say, then, that this post is its last post. Just as well I still have the memory… 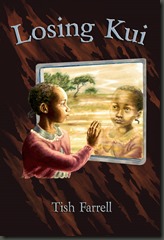 ON AMAZON AND ePUB BUD

37 thoughts on “To the Isle of Dwynwen, Welsh Saint of Lovers”