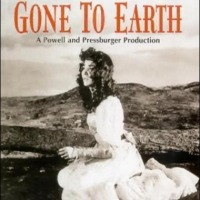 I had woken early, anxious not to miss our passing under the Verrazano-Narrows Bridge (that connects Staten Island to Brooklyn), a feat that had to be timed precisely to occur at 4.45 am to accommodate the soaring height of Queen Mary II. We had been at sea a week – for that’s how long the Queen Mary’s Trans-Atlantic Crossing takes – even now – and as the song goes – there had been nothing to see but sea. I was growing used to the meditative sameness of the view, and thinking I might just like to go on sailing forever. But then it was chilly too, and much of the time overcast; we saw not one sunset or sunrise, though one day I saw four dolphins. We spent our days and evenings after dinner roving the ship. You could walk miles, and often, despite the presence of 2,000 passengers and as many staff, we would find ourselves in utterly deserted quarters; silent but for the hum of ship’s engines. It was often very eerie, the more so after attending one of John Maxtone-Graham’s lectures on Titanic. He was Cunard’s resident historian, and his morning talks in the grand auditorium were one of the few activities we took part in.

On some days there were strong winds that put the top decks out of bounds – the doors firmly roped to prevent access. This was where the tennis courts, swimming pools and golf range were sited; also the pound for all those sea dogs who were accompanying their owners on the voyage. I spotted a labrador, dalmation, terrier and cocker spaniel, all under the care of the dog stewards. It made me think of the Trans-Atlantic Walking the Dog sequence in the 1937 Astaire-Rogers film Shall We Dance. (You can see a clip at the link.) 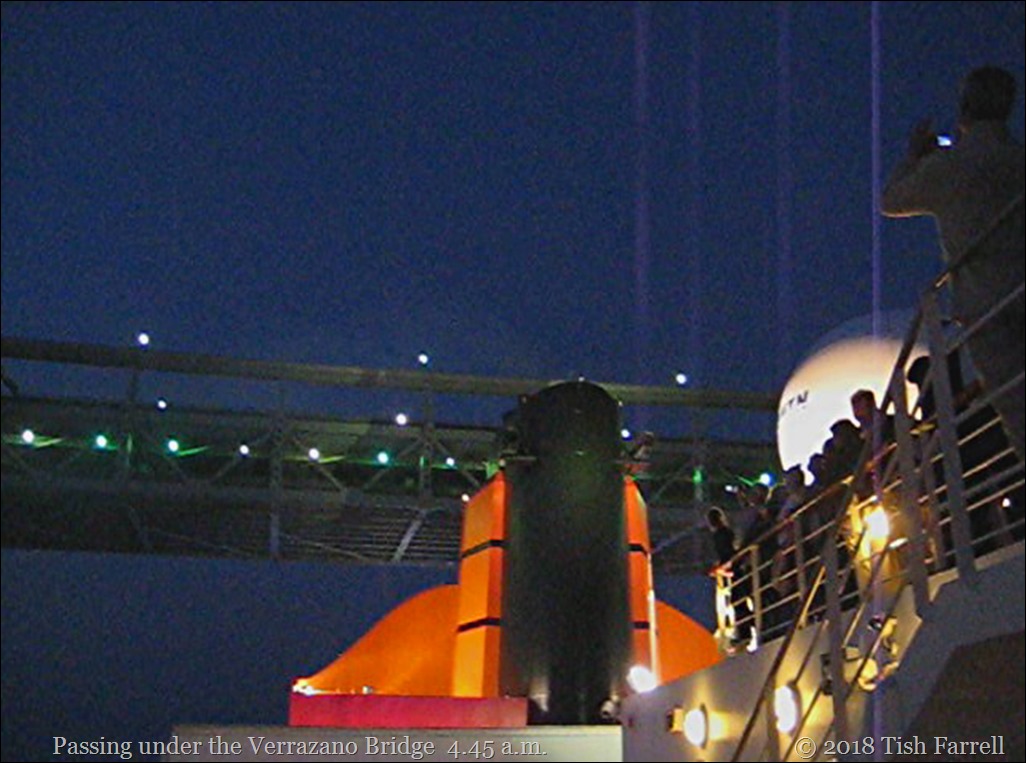 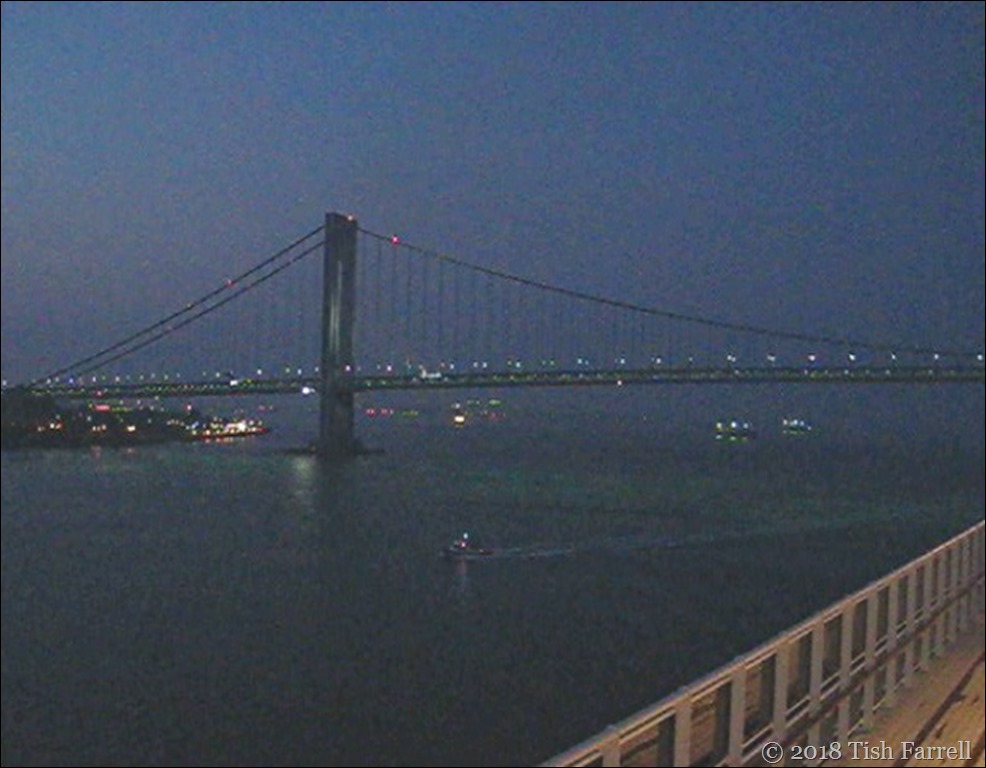 At 3.15 when I opened our veranda door it was like stepping into a steam bath. Somehow in the few hours between going to bed and making landfall there had been a complete climate change. All around were small craft, distant shore lights, sea birds flitting by like bats. It was a shock to see so many signs of life out there. Soon the little Sandy Hook Pilot boat was heading our way, disappearing astern to deliver the pilot. A little while later I saw the boat veering off again, lights flashing. It seems that not only the pilot had come aboard. Later still, I came across two hugely scary flak-jacketed security men, one wielding a very large weapon. Overhead a chopper dogged our slow progress. The passage under the Verrazano Bridge went smoothly, complete with accompanying loud-speaker commentary from John Maxtone-Graham. It was all immensely theatrical like much else on Queen Mary II.

The regal arrival next involved a stately three-point turn in front of the Statue of Liberty, this in order to dock stern-first at Red Hook, Brooklyn. We put in at 6.a.m, right on schedule, a blood-red sunrise over the new IKEA building. We’re here. New York. The last time Graham made this crossing he was three years old. They had sailed on Cunard’s much smaller Medea, a civilised first class only ship. He and his parents were set to start a new life in London, Ontario, where his father was project managing engineering works in a new power station. This new life would begin with a few days in Manhattan and a visit to the Empire State Building before heading to Canada. There was another connection too. We were carrying with us a copy of a letter written by one of Graham’s ancestral family members, Robert Baxter, a Northamptonshire farmer’s son who made the crossing to New York in 1852, and described the appalling conditions he witnessed in steerage when he had to go below to fetch water for his own cabin. At that time the voyage took 21 days and passengers had to do their own cooking, although Robert said he felt so sick for two of those three weeks that he could mostly only manage to eat the home-made cake he had brought with him. There would have been no Statue of Liberty to greet their arrival. She did not sail in until 1885.

Here is the last paragraph from Robert’s letter home.  He had gone to America to make his fortune. There is no doubting his sense of excitement:

New York is a dirty place but a wonderful place for business. It is very large. It appeared rather curious to see the telegraph posts and wires in all the principle streets and the railroad carriages running every quarter of an hour drawn by horses. They are beautiful carriages lined with silk plush. You can ride 3 miles for 5c. It is beautiful travelling. It is a splendid sight to see the fire engines and that is nothing new. I have seen them out 6 times in one day.

Arrival in a new country is often fraught with anxieties, and US immigration is particularly fraught-making. We began our own adventure with mixed emotions, but then thoughts of Robert Baxter’s enthusiasm proved infectious. A week in Manhattan and old friends to catch up with. It was bound to be good. 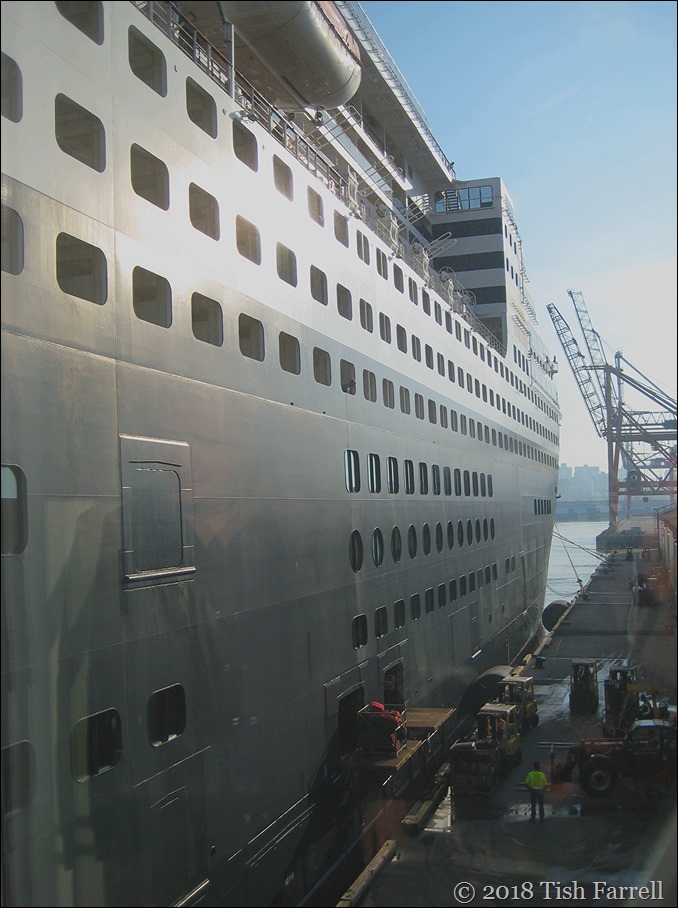 Please visit Debbie to see her stunning views of St Pancras Station. She kindly allows some of us to overstep the 6-word mark – just so long as we have a 6-word title. 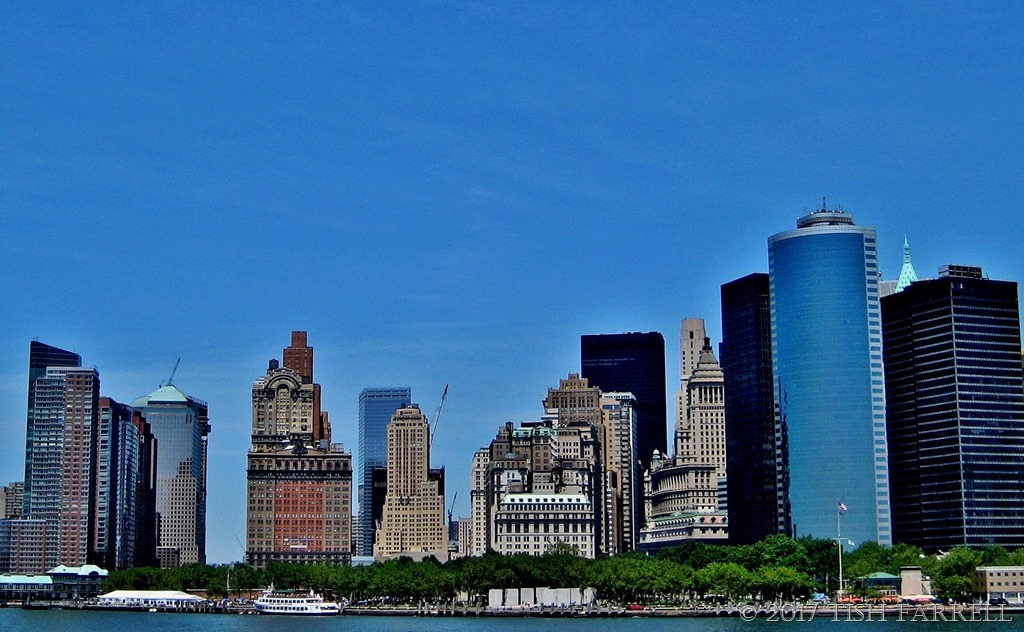 Our trip to New York a few years ago coincided with a heat wave. It was too hot to think or walk far from the iced coffee stalls in Central Park, or the cooling air conditioned corridors of the Met. The other best place to be was riding the Staten Island Ferry.  Nice breeze. Stunning views of Manhattan and dead cheap. 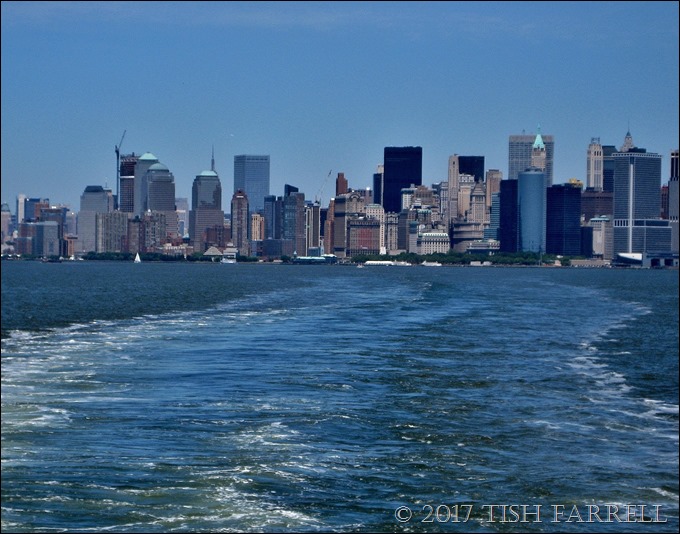 Thursday’s Special: please visit Paula and pick a word that inspires you. I’m going for ‘soaring’.

There was wall to wall sun when we visited New York in early June a few years ago. In fact it was so hot we spent most of our week there in Central Park trying not to melt. But the full-on sun certainly lit up these magnificent bronze bears. They are affectionately known as ‘The Three Bears’, and may be found at the Pat Hoffman Friedman Playground at Fifth Avenue and 79th Street. The work was gifted to the Park by Samuel N. Friedman in memory of his wife – a fine dedication all round. 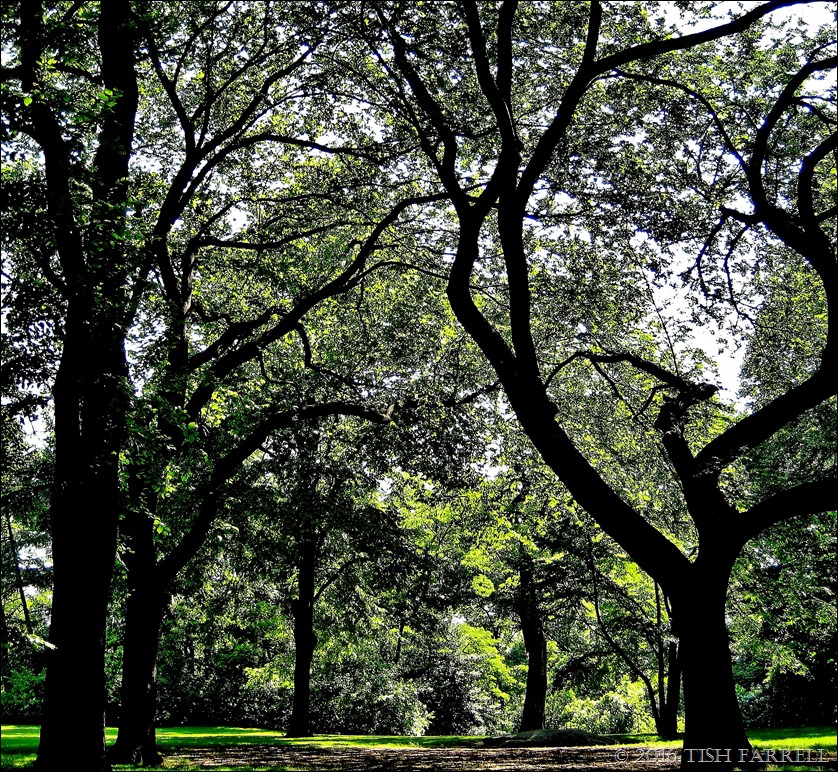 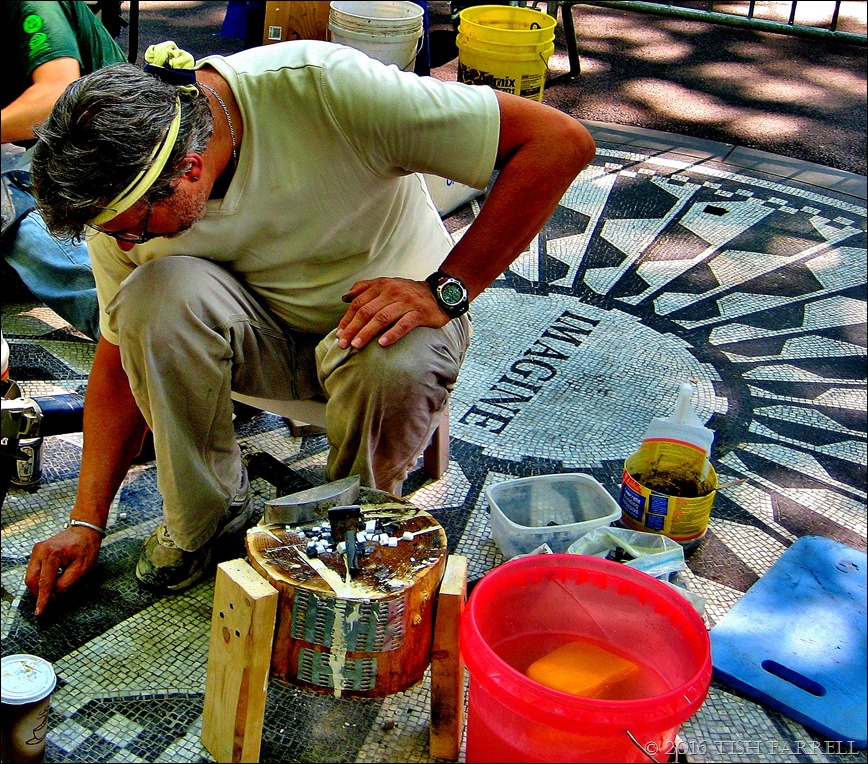 It was so hot when we visited New York a few years ago we spent most of our time in Central Park, drinking ice coffee at every available opportunity. There’s anyway so much to explore. On one of our forays we set out to find the Imagine mosaic, laid in tribute to John Lennon who created the song, and was so sadly murdered outside the nearby Dakota Apartments.

It took some finding too, even though we thought we knew exactly where it was. Part of the problem, we discovered, was that it was surrounded with barriers to shelter the two artists who were painstakingly working on its restoration. I didn’t mind not seeing the mosaic in its pristine form. The fact that it was being so actively cared for, given the song’s message, was heartening.

This elegant artwork lies in the middle of Strawberry Fields, a two and a half acre oasis of quiet also dedicated to the memory of John Lennon and his work. It is a designated Garden of Peace, and 120 countries contribute to its upkeep.

It is a very beautiful place to visit, so not to be missed on any New York trip. You can find out more details HERE.

Paula’s theme this week at Thursday’s Special is ‘Park’ 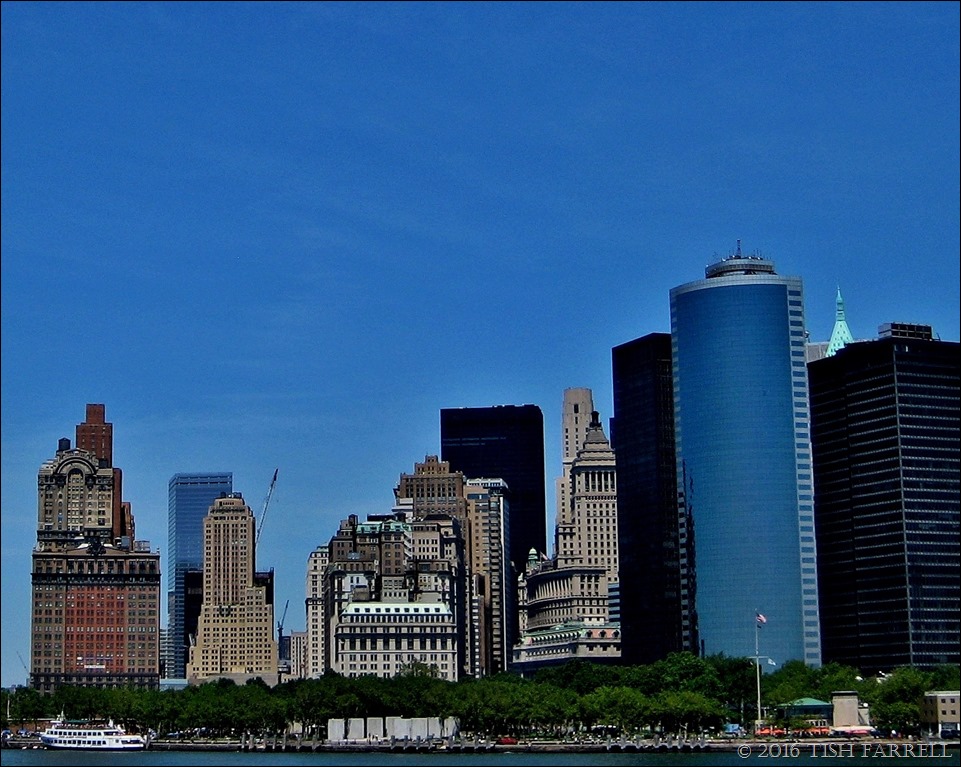 Doesn’t time just fly. I can’t believe that it’s nearly eight years since we sailed into New York on Queen Mary 2, star of the Cunard fleet. The Atlantic crossing takes seven nights, and seasoned Cunarders will be quick to tell you that this voyage is a crossing (The Crossing in fact) not a cruise. We docked at dawn in Brooklyn after a long and majestic glide up the Hudson River. The Statue of Liberty glowed through the mist. It was May, and a heat wave was brewing.

Over Brooklyn and the dockside cranes a huge red sun was rising. It gave a surreal glow to the instantly recognisable (to us that is) corporate blue and yellow of the new IKEA store (America’s first if I remember rightly). It was set to open the following month, and we later noticed much associated fanfare on bill boards around the city. Free sofa cushions came into it somewhere. I also remember feeling a bit offended that I’d been at sea a week, all pent up for the grand sail-by of the Statue of Liberty and that first stunning glimpse of the Manhattan skyline, only to have this bland blue furniture shed be the next landmark imprinted on my mental landscape.

They should definitely move it.

Anyway, for those visiting NYC by plane rather than ship, you can have the grand ‘sailing into New York’ moment for free, and thus as  many times as you like, on the Staten Island Ferry. Pick your moment for the best shots. Sunset would be good.

Seasonal Living in Middle England - with a family of seven