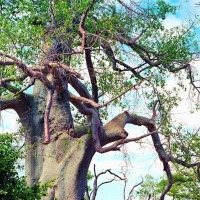 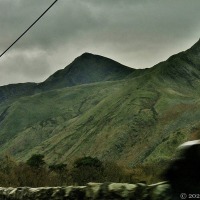 They call themselves i-Mazigh-en ‘the noble people’ and they have inhabited western North Africa for at least 12,ooo years. Or as the 8th century Tunisian historian Ibn Khaldun put it:

“The men who belong to this family of peoples have inhabited the Maghreb since the beginning.”

This might be mythically ‘true’ but scientific enquiry has produced other scenarios. For instance DNA tests show that i-Mazigh-en have common traits with the Sami reindeer herders of Scandinavia. They seem to have arrived in North Africa from the Near East back in the Mesolithic era, in other words before the development of agriculture. Over the millennia they have absorbed many different ethnic groups, including Neolithic farmers, Romans and much, much later, the Bedouin Arabs who began to invade the Maghreb from the mid-600s AD  and, in the process, largely converted the Berber to Islam.

The name Berber appears first in Roman accounts, and probably derives from the Roman habit of calling non-Latin speakers barbarians. (At least this is the sort of thing my Latin teacher used to tell us). The ancient Berber kingdom of Numidia (202 B.C. – 46 B.C.) once extended along Africa’s western Mediterranean seaboard including territory that is now part of modern day Morocco, Algeria, Tunisia and Libya. Numidia’s border effectively cut off Roman Carthage from the African hinterland, which may explain why the Romans were set on annexing the kingdom. During the last two centuries BC,  Numidia became highly Romanized, at different times serving as either a Roman province or a client state.

Today the are  some 9 million Berbers in Morocco,  4 million in Algeria as well as significant populations in neighbouring countries. Most Berbers are farmers. They grow wheat, barley, fruit, olives, nuts on lowland farms and graze their flocks of  goats and sheep  in mountain pastures during the summer months. They also keep mules, oxen, camels and horses for  work and transport.  Then there are the nomadic pastoralists. These include the Tuareg of Mali, Niger and Burkina Faso, who though sometimes seen as a separate people, in fact carry Berber genetic markers that suggest they may be members of the founding Berber population.

These photos, however, were all taken in rural Morocco, somewhere on the road from Marrakech to Fez  (Atlas mountains in the distance). Again they come from G’s slides of his overland trip, and they show a traditional Berber performance of the Fantasia, known locally as  lab el baroud  “the gunpowder play”. On this occasion village people were commemorating  the  25 years rule of King  Hassan II (1929-1999), but the Fantasia can also mark the conclusion of wedding celebrations, and other seasonal festivals. 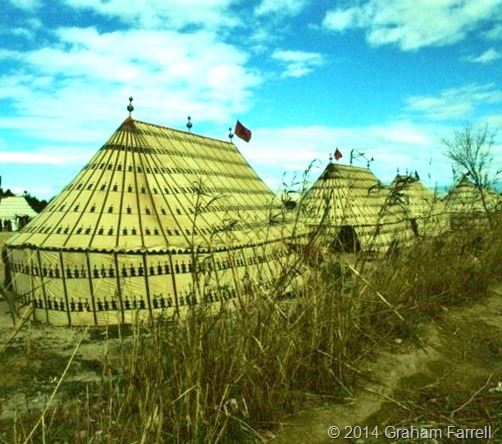 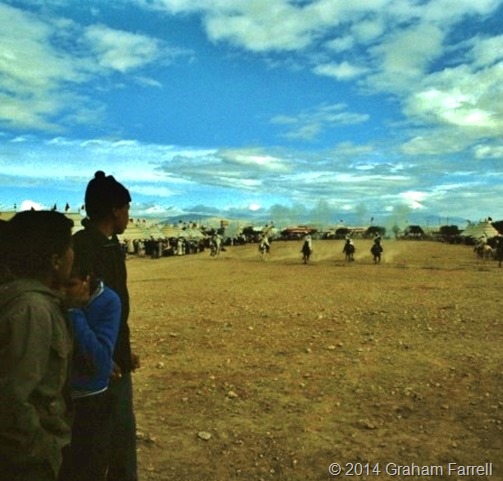 The performance harks back to past days of warfare, mimicking the charge formation by Berber and Arab desert riders. It hardly needs me to say that the synchronised charge, followed by the firing into the sky of antique muskets or muzzle-loading rifles, requires great riding skill. The horses also are especially bred and selected for the purpose. Lab el baroud has become the equivalent of a martial art. Each region in Morocco may have several fantasia groups or serba, amounting to thousands of riders nationwide. The 19th century image below shows how little has changed, at least at the time when these photographs were taken. But in other ways, Berber culture has moved on. Well, it has and it hasn’t. Make up your own mind with this performance of desert blues from the Tuareg band Tinariwen.