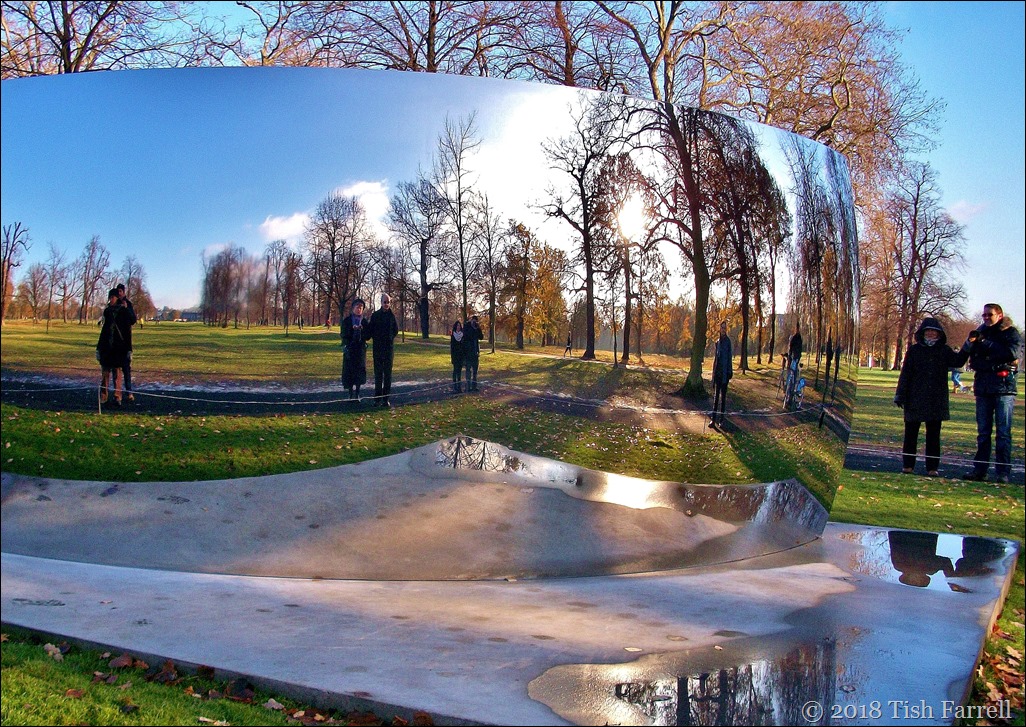 C-Curve by Anish Kapoor and reflective puddles courtesy of the rain god; photo taken several freezing Decembers ago in Kensington Gardens. You can spot the Farrells looking a bit stiff – centre twosome on the left.

Lens-Artists ~ Reflections  Patti set the challenge this week. Her fantastic photo of the Chicago Bean sculpture by Anish Kapoor reminded me that I had photos of his work too. 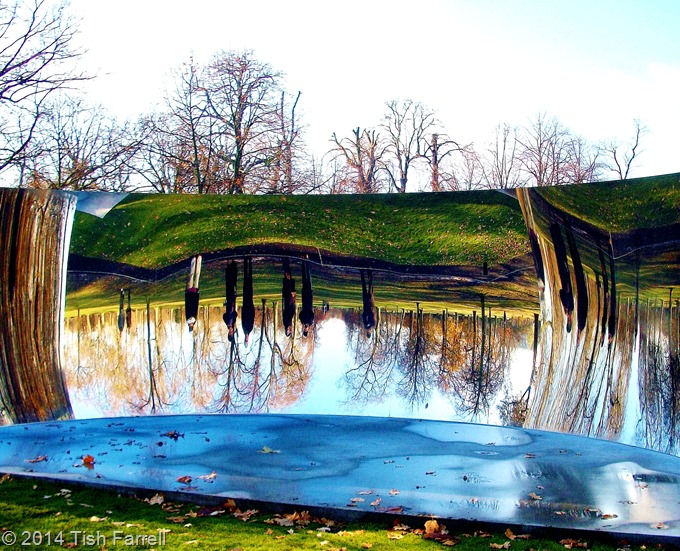 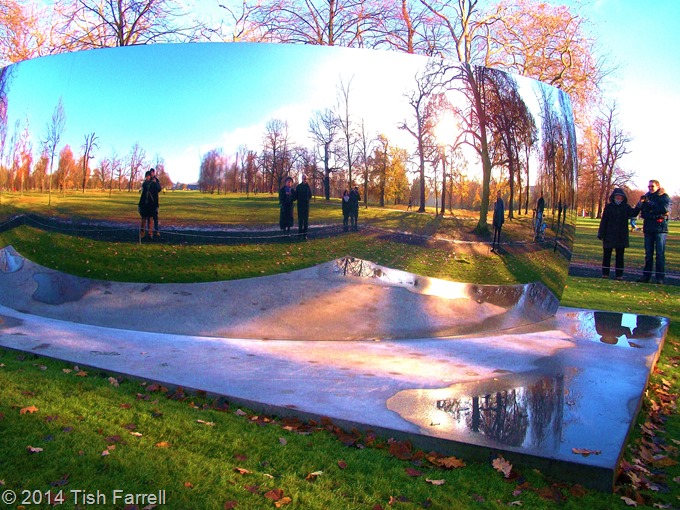 These photos of the C-Curve by Indian sculptor, Anish Kapoor, were taken on freezing cold winter’s morning in London’s Kensington Park. The marvellous stainless steel creation was one of four Kapoor pieces sited across the park for the Seeing the World Upside Down exhibition hosted by the Serpentine Gallery and Royal Parks in 2010-2011.

Some of you will have seen these  shots in earlier posts, but I thought they were perfect for Cee’s challenge for all sorts of reasons. For one thing, the stark silhouettes of trees say ‘winter’, but the bright sunlight also says that life goes on; and the trees themselves, though dormant, are still full of life. I also like the reflections of the couple and the trees in the puddles on the plinth, and the reflections of the puddles in the sculpture. It is all so playful, yet reflective too – and in every sense.

Cee’s Fun Foto Challenge: water or the season of winter    Go here to see more bloggers’ takes on this challenge 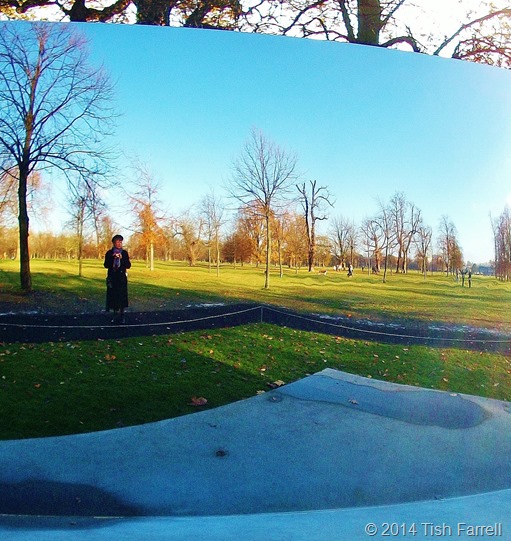 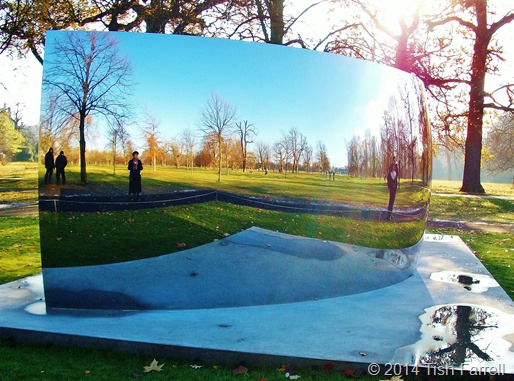 Yes, this is me in the hat, snapping myself inside Anish Kapoor’s wonderful C-Curve installation. To see more of the C-Curve go HERE and join me in Looking Glass Land.  And yes, this was just an excuse to show again this brilliant piece of public art – the kind that invites you in makes you part of the picture.

Related: Object, subject, object: who cares when it’s this much fun 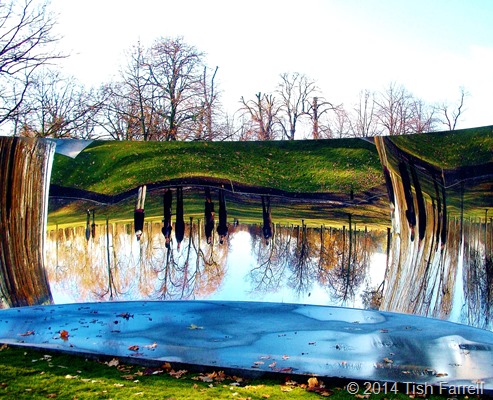 It was a brilliantly cold December day and we heading for the Serpentine Gallery in London’s Kensington Gardens when when we happened on this marvellous magic mirror. We were already in fantasy-mode too. We had just been questing in Kensington’s Enchanted Palace exhibition, wherein the State Apartments had been filled with mysterious installations that told serial tales of seven princesses who had once lived in Kensington Palace. Many of the stories were hauntingly sad, and the last of these, Princess Diana’s, very much skated over. And so, despite the grandeur of the place, and the wonder of the installations, we were left with disturbing cobwebby feelings that made me think of finding wicked fairies in the attic. It was good to step out into the icy air and  regain some sense of reality.

But then look what happened…?

Wandering through the wintery park, we collided with this piece of optical wizardry – sculptor Anish Kapoor’s C-Curve – a highly polished steel convex-concave mirror. It turned out to be one of four magnificent pieces making up the six-month 2010-11 exhibition put on by the Serpentine Gallery in conjunction with the Royal Parks. Sadly, the exhibition is over, but you can have a retrospective view and see a short video at this link:

But the great thing about the C-Curve was the huge enjoyment it was giving to all the passers-by. Public art at its very best. You could walk right up to it. You could watch yourself do silly walks and upside-down too. You could hug your partner and grin inanely at your reflections. It made you, the viewer, the subject of the work. It inspired you to explore the landscape with fresh eyes as reality became a multi-layered spectacle and wonder. It was thus a resplendent antidote to palace fantasies and wicked fairies in the attic. What an artist is Anish Kapoor.

And finally for a different interpretation of OBJECT. Here is Anish Kapoor and friends in the official Amnesty International’s video objecting to human rights abuses. Gangnam for Freedom. Go for it…