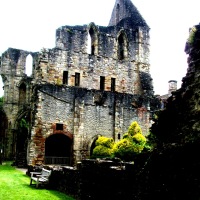 We Brits are renowned for an unbridled capacity to talk about the weather, and this month there has been so much of it, and sometimes all at once. In the Farrell household the question has been  hourly batting back and forth between he and she who live in our house: have you seen the weather forecast?

He has a major earth-moving project in the back garden – dismantling a raised bed, and sawing up next winter’s firewood supply since we keep using the logs that have already been chopped. She has a major earth-moving project up at the allotment – filling raised beds with a recycled compost mountain. There is also seed sowing, hardening off and planting out of vegetables to consider, all of which are dependent on weather conditions in general, and knowing how long arctic winds and icy rain will last in particular.

But what can one say about British weather that our greatest poet, William Shakespeare has not already said, since even he, with all he had to write about, was somewhat climate-fixated:

With hey, ho, the wind and the rain…

For the rain it raineth every day.

He’s not too heartening for next month either:

Rough winds do shake the darling buds of May.

Oh well. Better hang on to the woolly hats  and vests, wellies and waterproofs.

Cardinal Guzman The Changing Seasons April 2016 Go here to see the Cardinal’s take on April, plus his rules for the challenge. Then join in!

40 thoughts on “April’s Changing Seasons: Fifty Shades Of Grey And A Little Bit Of Blue”