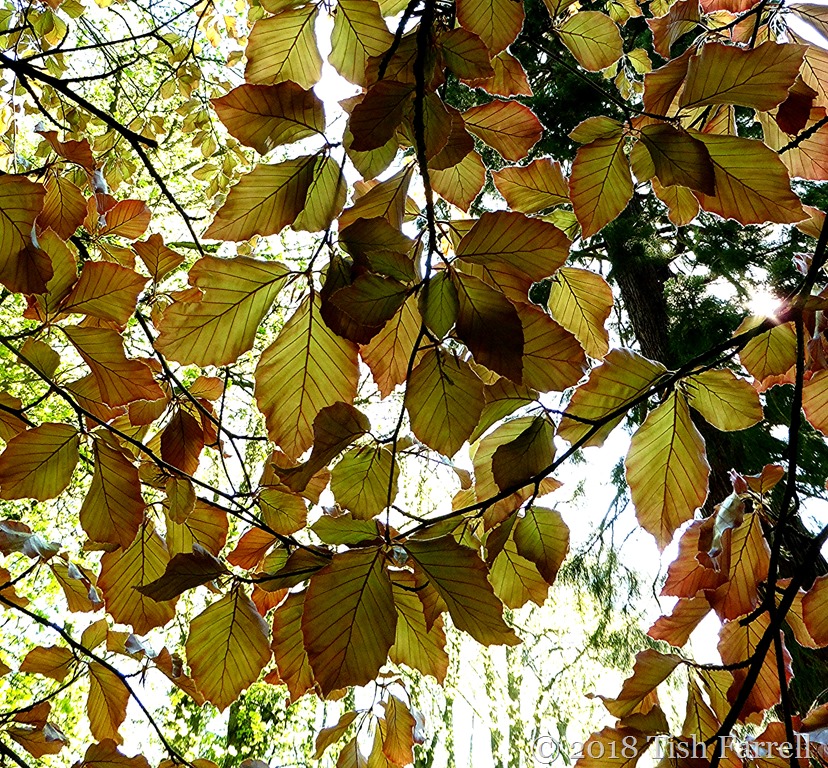 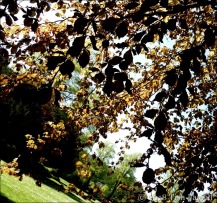 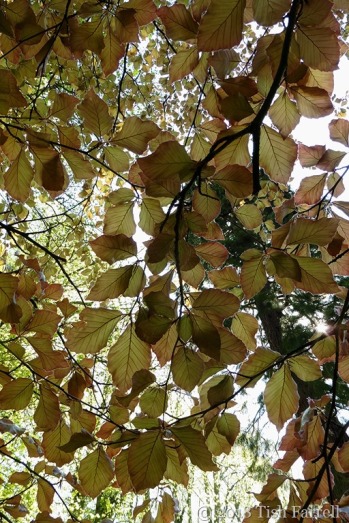 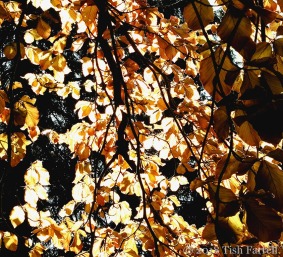 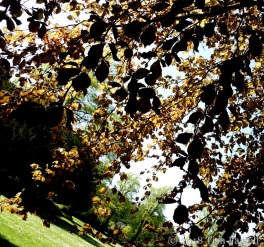 And every July the Wenlock Olympian Games are still held on and around the Linden Field and at the adjacent William Penny Brookes School, which is fittingly named after the Games’ founder. 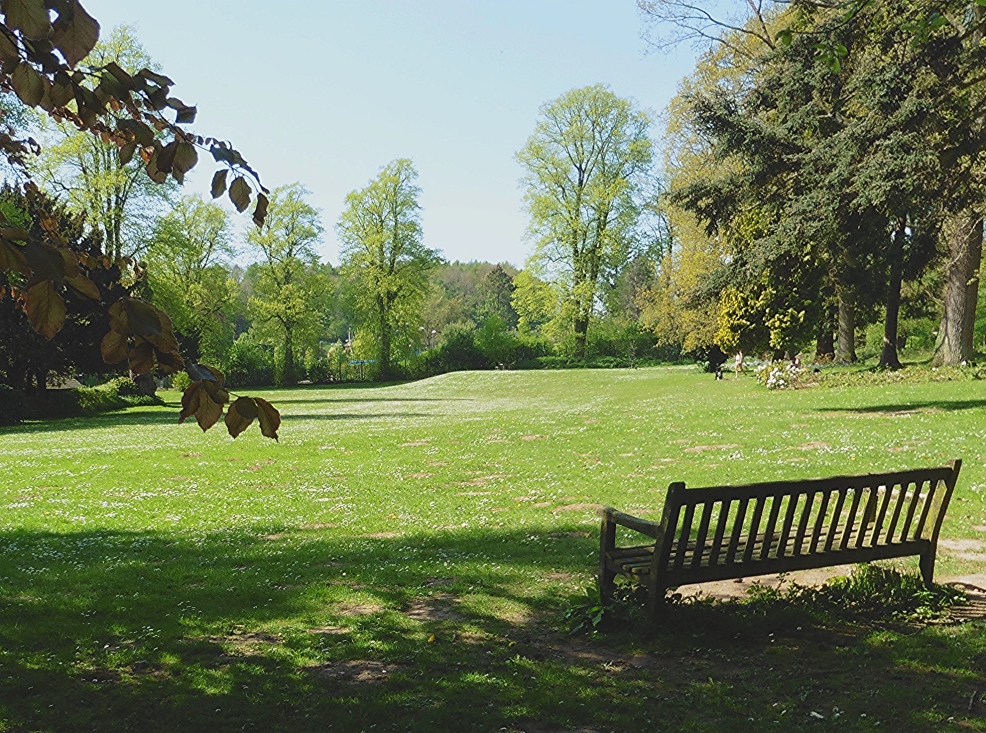 We had the first hard frost of winter today and, after weeks of dreariness and both rising and falling damp, it was a great relief to feel some good crisp cold. Not only that there were clear skies. And sun. And brilliance. Up on Windmill Hill there were also fine views all round, although the midday light did have the strangest quality – creating vistas that were sharp in parts, but soft-focus in others. The landscapes I snapped looked like water colours even before I snapped them. Also the farm fields loomed in unnatural shades of green, at least for January.

As we strode home beside the Linden Walk we passed the frosty picnic tables. They looked as if they had been freshly spread with perfect white cloths, but sadly there was no sign of lunch. It seemed a long way off till summer. 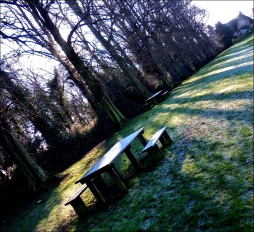 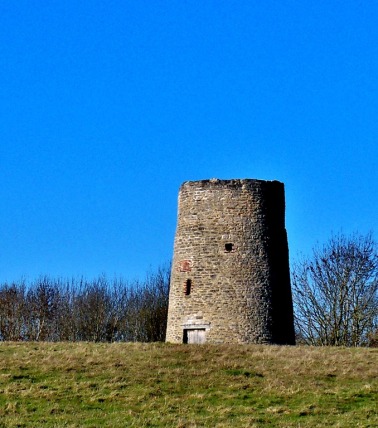 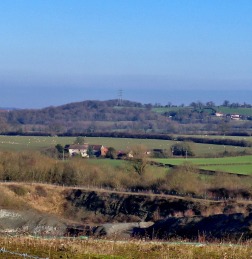 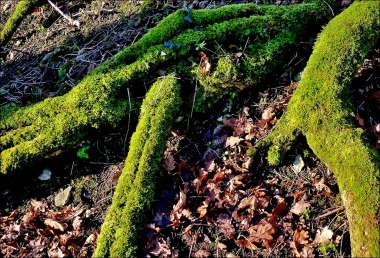 This post was inspired by Cardinal Guzman’s The Changing Seasons monthly photo challenge, which now comes in two versions. Please follow the link for more details.

I’ve chosen to feature Much Wenlock’s Linden Field and nearby Windmill Hill, since this was where the modern Olympic Movement had its beginnings, and was (and continues to be) the venue for the annual Much Wenlock Olympian Games, founded by Dr. William Penny Brookes, the town’s physician, in 1850.

These days the games take place at the William Brookes School just below Windmill Hill, and on purpose built tracks, but in the old days spectators sat on the hillside and watched the events taking place in the field below. Please conjure races on penny farthing bicycles, hurdling, tilting, and all manner of athletic events – not least the Long Foot Race that was only open to Greek speakers. There would also have been cricket and football matches, and fun events such as ‘an old woman’s race’ for a pound of tea, and a blindfold wheelbarrow race.

Dr. Brookes had serious objectives however. He was a man ahead of his time, who embraced a holistic view of human health that included both physical and mental exercise. He also planted the Linden Walk, no doubt because as a trained herbalist as well as a physician, he knew of the soothing effect, and sense of well-being imparted by lime tree blossom on warm summer days. It is good to walk in his footsteps.

This bench is only a short walk from our house, although a bit of a steep haul up Windmill Hill. The windmill itself is quite a landmark in Much Wenlock, although much about its history, and how it looked when in use, remain to be discovered by the stalwart Windmill Trust whose members take care of it.

There is always something to see from this bench, quite apart from the views across Shropshire. Even the vegetation is interesting. It is a rare remnant of limestone meadow, and in late spring there will be cowslips and orchids here, wild thyme and primroses. Later there will be agrimony, giant  knapweed, St John’s Wort, yellow bedstraw and hare bells. Sometimes the miniature ponies graze here, all part and parcel of preserving the meadow.

Recently some of us combined dog walking and watching the eclipse from here. And while we were doing that… 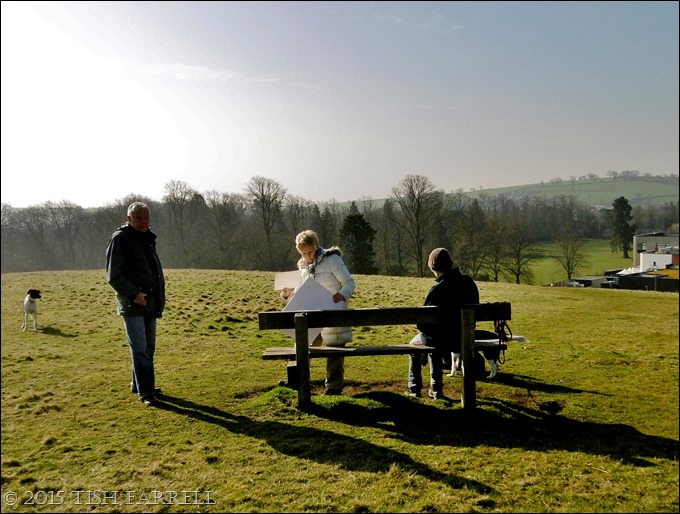 He, more than most, has done so much to uphold the values of the town’s erstwhile physician, William Penny Brookes (1809-1895). Brookes reinvented the Olympic Games in Much Wenlock in the 1850s, and provided the inspiration for the modern Olympic Games.  The Wenlock Olympian Games are still held every July on the field below and at the nearby William Brookes School. The three-week series of contests attracts athletes from around the world. Jimmy has also coached many youngsters  participating in the Wenlock Games.

And finally, I thought I’d pass on some Olympian glow on this Monday morning. You can just see the windmill in the background, the William Penny Brookes Academy on the left, and the community’s own Linden (Olympian) Field in the centre ground. Besides, it is not good to linger about, sitting on benches, splendid though their views may be. Latest medical opinion informs us to keep standing up.  Or to quote Tom Petty and the Heartbreakers  “if you don’t run, you rust.”  Walking, however, is probably best for most of us.

At Travel Words during April, Jude is looking for benches with a view 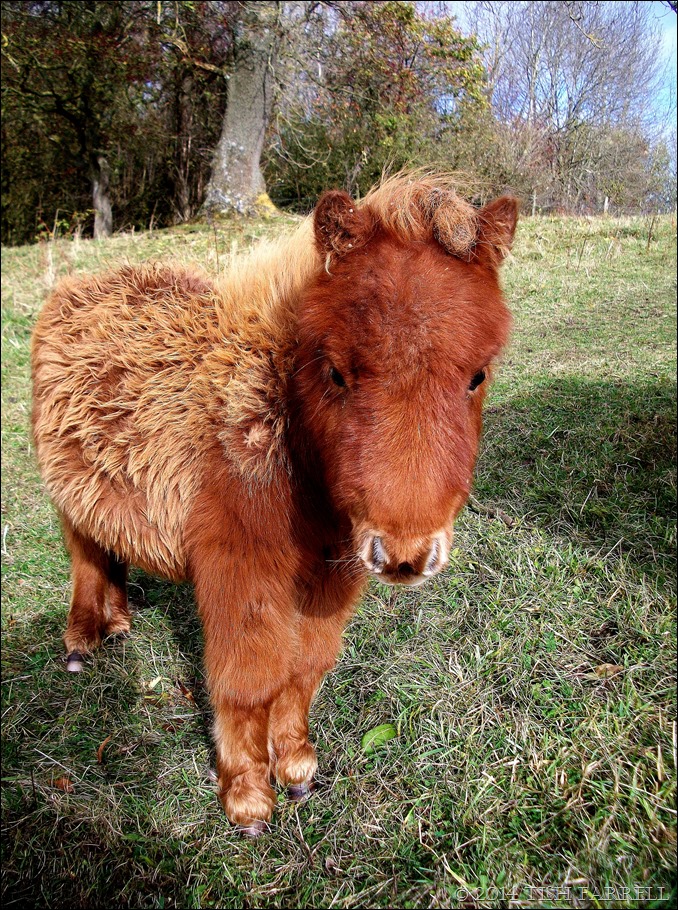 For a small community a lot goes on in Much Wenlock. In fact you  never do know what you will find even a stone’s throw from the doorstep. So it was that on a recent  foray up Wenlock’s Windmill Hill, and for quite another purpose, G and I met up with this astonishing little horse.  Given its newness on the planet, I was impressed by its air of stolid self-containment. It did not move an inch as I walked around it snapping photos. I asked it a few questions of course, but it seemed lost in thought. I even felt it might be having an identity crisis: I am a real little horse, aren’t I? Or am I?

Then at last it reached a happy horsey conclusion and went off to do a bit of grazing with the other little ponies. But please do not ask about the man in the next photo. He has the most irritating habit of walking into my shots. Does anyone else have a man who does this? Here, though, he is perhaps adding some sense of scale, a factor drilled into me as important during my student-archaeologist days. And archaeology, not little ponies, was the real reason for this outing to Windmill Hill.

In the background you can see the limestone tower that gives the hill its name. It is a famous local landmark, and only a short walk from our house. In its time, it has been both a watch tower and  a windmill. Carved stones from its interior suggest construction dates of 1655-57, but none of the members of the Windmill Trust, the volunteers who look after the monument, has been able to discover quite what the mill would have looked like during its working life.

On the day of our visit a small archaeological dig was taking place beside it to investigate the possibilities of earlier human activity on the site. We went to see how the diggers were getting on, but disappointingly they said they had not found much that was particularly old. There were broken clay pipe stems  of course– a feature wherever you turn a spadeful of earth around the town. Clay pipes were an important manufactured product here in the 17th century, and clearly used extensively by the locals as well as being exported.

On finding there had been no great discoveries, we wandered off across the hill. In early and late summer the pasture here is covered in wild flowers typical of a limestone meadow – orchids, cowslips, agrimony, wild thyme, St. John’s Wort, knapweed, drifts of yellow Lady’s Bedstraw, but now the grassland has a tired look, though clearly tasty enough for the ponies.

We scanned the fields all round. Recent lidar remote sensing surveys have revealed the existence of extensive mediaeval remains a few fields away from the windmill, and also the possible outline of a Roman villa. In any event, there would have been much human activity in the area from at least 680 AD when Milburga, the daughter of the Mercian king, Merewahl,  became abbess of Much Wenlock Abbey. Her land possessions were extensive. She also later became a saint, renowned for all manner of odd miracles.

But great antiquity apart, the views from the hilltop reveal everyone’s idea of  a typical English farming landscape, although it does not come without its adjacent ‘blot’. The ground immediately behind the hill falls away into a bleakly huge quarry with a deep pool of strangely turquoise water.

Now disused, the workings are screened by conifers, and also by this astonishing display of hawthorn berries. Plans to turn the site into a diving school with log cabins seem to have to been dropped.

At the foot of Windmill Hill is the Gaskell Recreation Ground, or Linden Field. Having long been used for village cricket and bowls, it was bequeathed to the people of Much Wenlock in the 1930s by a descendent of the Gaskell family who owned much of Milburga’s former domain. It was here too, from 1850 that the first modern Olympian Games took place every year, attracting athletes from across the country. The man responsible for reviving this prestigious sporting event was the town’s local doctor, William Penny Brookes.

Every year, thousands of visitors would come to watch the games, arriving on the Olympian Special train. The station was conveniently situated  beside the field, the bringing of the railway being another of Penny Brookes’ successful projects for the benefit of Much Wenlock. The field was bare of trees in those days, so spectators could sit on Windmill Hill, amphitheatre-style, and have a fine view of track and field events.

Penny Brookes was also a campaigner of national standing. It was he who argued for the introduction of physical exercise into Victorian schools. He even did clinical trials to prove how young bodies grew well as a result of it.  His fame spread, and in the 1890 Baron Pierre de Coubertin, charged by the French Government to improve the physique of the French army, came to Wenlock to see Dr. Brookes’ Olympian Games for himself.  An elderly Penny Brookes apparently took this opportunity to share his ideas with the younger man, but sadly died four months before the launching of the first international Olympics in Athens in 1896. De Coubertin did, however, pay tribute to the Shropshire doctor’s vision:

” If the Olympic Games that Modern Greece has not yet been able to revive still survives today, it is due, not to a Greek, but to Dr W P Brookes.”

The Much Wenlock Olympian Games still take place on the Linden Field every July, and attract sportsmen and women from around the world. The Olympic Association also acknowledged Much Wenlock’s contribution to the modern movement with the naming of the Wenlock Mascot in the 2012 games.

But now here we are heading homewards, taking the path that runs down edge of the Linden Field, and beside the old railway line. Here William Penny Brookes left another legacy. He planted an avenue of lime trees – the Linden Walk. Many of the trees are around 150 years old and still going strong. The scent of the blossom in summer is transporting, but the walk is beautiful any time of the year. It is one of the town’s many treasures, and accessible to all.

As I stopped to take this photo, a young woman went powering past me, clearly in training for some event. But as you can see, that man is also there again. It is a puzzling phenomenon – how he is ever in my sights.