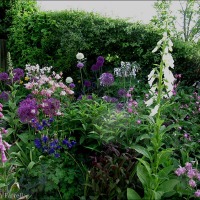 I was thinking of Jude as I took this photo last Thursday. Now she lives under a Cornish sky, but not so long ago this was her stamping ground, and I’m pretty  sure she knows the path I am standing on as I take this photograph. It skirts the cliff beneath the brooding elevation of Ludlow Castle in Shropshire, the River Teme rushing over the weir below.

The other thought that was running through my head was: what a place for a honeymoon. And yes, I’ve mentioned this before. But even with the walls intact, the great hearths lit, and the tapestries well hung and thickly plied, it would have made a daunting venue for post-nuptial celebrations. The bride and groom I am thinking of were only teenagers, and the year was 1501. Fortunately for them, some consideration was given to their comfort and they were lodged, not inside the castle, but just outside the walls in the Castle Lodge.

By then the castle had already been standing for over 400 years. It was built after the Norman Conquest between 1066 and 1085. Its purpose control and domination; its overriding associations with war not love. It had been built on the borderland between England and Wales to keep the Welsh warrior princes in check, and thereafter figured in three civil wars and numerous uprisings. In the 12th century King Stephen and Empress Matilda fought over it. In the 13th century it featured in the Second Barons’ War. In the Wars of the Roses in the 15th century it was a Yorkist stronghold under Richard Duke of York (later Richard III). In fact anyone who was anyone throughout a thousand years of history either pitched up here in person, or had the place in their sights for some political reason or other.

And the teenage newly weds? One was Arthur Tudor, Prince of Wales, just fifteen years old, and heir to Henry VII. His bride, a few months older, was Catherine of Aragon, betrothed to him since the age of three. They had been married at St. Paul’s in London on 14 November 1501, only ten days after their first  meeting. Arthur informed Catherine’s parents (Isabella I of Castile and Ferdinand II of Aragon) that he meant to be ‘a true and loving husband’. But from the start there were problems of communication. The couple tried speaking to each other in Latin, but were confounded by their differences in pronunciation.

But then what do such things matter when it comes to state expediency? The marriage was a matter of strategic alliance, and the honeymoon at Ludlow was all about Arthur being seen to stake just claim over Wales.  He was  there on royal business to preside over the Council of Wales and the Marches.

The couple were in Ludlow over the winter months, and one wonders how a girl from the sunny warmth of Spain felt to be despatched  to such a union and to such a place. One hopes they found some joy there, although it would have been all too brief. They both fell ill with the highly contagious ‘sweating sickness’ which was sweeping England at this time.  By April 1502 Arthur was dead, and Catherine swiftly rendered a diplomatically inconvenient widow – a pawn in the foreign alliance game.

Apart from anything else, there were serious financial implications for Henry VII. Ferdinand had only paid half of Catherine’s 200,000 ducat dowry. Now Henry was faced with returning it, and/or suing for the unpaid portion. So it was that Catherine became betrothed to Henry’s second son, Henry, Duke of York, whom she finally married in 1509, thus becoming the first wife of Henry VIII. For 24 years all went well, and then Ann Boleyn came along and it was all damn lies, character assassination, cruel confinement  and social ostracism for Catherine. A sad end indeed for a Spanish princess, our long-time English queen, and Europe’s first woman ambassador. 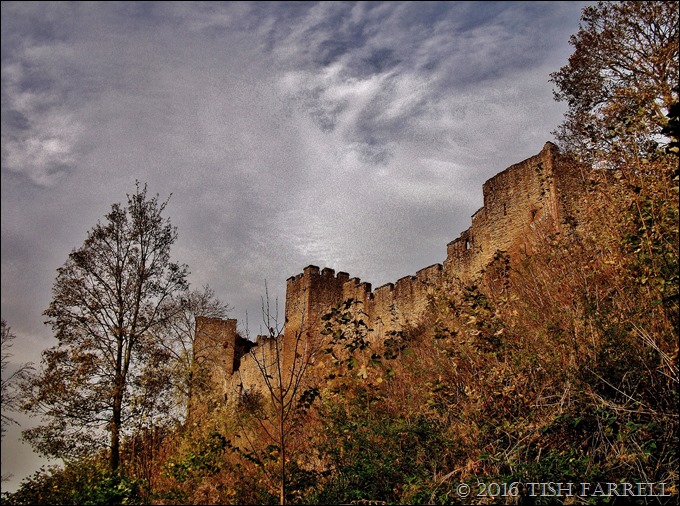 I recently posted a dramatic black & white photo of this thousand-year old castle – one of Shropshire’s finest. Here are the perimeter walls from a different angle, on their clifftop eyrie above the River Teme. It must have been a daunting sight for any peasant foot soldier commanded by his lord to get on and besiege the place.  It might explain why so much of the castle is still standing.

Traces of the past is the theme over at Paula’s Thursday’s Special.