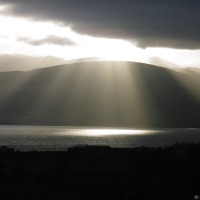 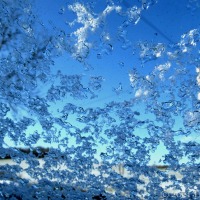 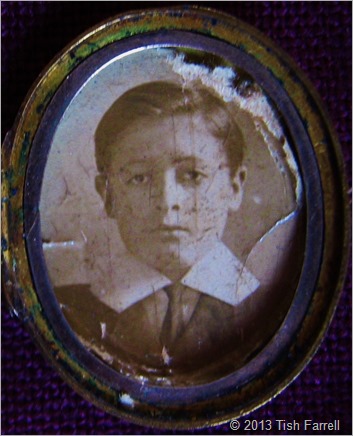 Ninety nine years and one month ago, my great uncle, Giles Rowles enlisted with the 14th Battalion, Australian Imperial Force in Melbourne. He was an English sailor, born in the Old Red Lion Inn, Hollins Green, near Manchester. He was eighteen years old. By the time he enlisted, both his parents, Charles and Mary Rowles were dead, and for reasons unknown he had changed his name to Victor. When he enlisted he gave his next of kin as Aunt Louisa Rowles of 10, Despenser Gardens, Cardiff. She was his dead father’s widowed sister-in-law.

This photo from his mother’s locket is the only known photograph of Giles. He was the only child of my great grandmother’s second marriage to Manchester Ship Canal pilot, Charles Rowles. There were four older step siblings. He was thirteen when his widowed mother died, and it seems he then went to live with Aunt Louisa in Cardiff. The 1911 census return lists him as a trainee shipping clerk. His older cousin John, who was still living at home, was a shipping agent. The next record I have of him is when he enlists in Melbourne in October 1914.

The National Australian Archives have made all the war records available on line, and it was from these that we have been able to piece together a little of Victor Rowles’ last year on earth. It is noteworthy that he writes his signature on the enlistment form with a confident flourish. It is the clear hand of someone who has been a clerk. But the details are sparse, and all the more disturbing for that. The Medical Officer at Broadmeadows, where initial military training took place, lists the following: he was eighteen years and seven months, 5 feet 5 and a quarter inches , weighed 135 pounds. His complexion was ruddy, his eyes green and his hair brown. His only distinguishing marks are two vaccination marks on his left arm. I don’t know why I find it upsetting to know that his eyes were green.

On 22 December 1914 he embarked for Egypt on the HMAT ‘Berrima’, arriving there for further training in January 1915. On the 25th April  the Australian Imperial Force (AIF) landed at Gallipoli together with troops from New Zealand, Britain, and France. This began a campaign that ended with the evacuation of troops on 19 and 20 December 1915.

The Australian and New Zealand forces held out for months on the narrow beachhead that became known as  Anzac Cove. Quite apart from the sniping and shelling from the hills above, conditions there were terrible. From the start, it was a quite pointless campaign with much digging in, and little or no ground gained. Then on 6th August, having survived one nightmare, the 14th battalion took part in the final British attempt to wrest control of the Gallipoli Peninsula from the defending Ottoman Turks. This involved the Anzacs moving up the coast to take Hill 971, a beetling, rugged ridge known to the troops as The Sphinx.  From an account in the official war diary,  the advance uphill and across impossible terrain that only gave great advantage to the enemy was courageous if chaotic; there were many casualties.

On  8th August Victor Rowles was taken aboard the hospital ship Devanha where he died of gunshot wounds. He was buried at sea on the 10th August, two miles east of Mudros Harbour on the island of Lemnos. His few effects, including a handkerchief, manicure-set, letters and photos, were later sent to his Aunt Louisa, as were the memorial scroll and plaque. All these items are lost now, along with his three medals.  Nonetheless, now that I have found out these few fragments of his life, I will surely remember him, along with the many thousands of brave, but needlessly lost ones on both sides of the Gallipoli campaign.

You can see the marvellous full-length film Gallipoli here. It movingly covers both sides in the conflict.