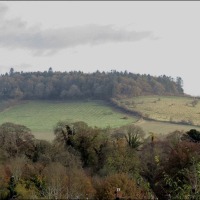 Well he has to be some sort of Greek god, doesn’t he? For one thing I can tell you he wasn’t wearing a stitch beyond the sarong slung round his neck though you will have to take my word on that.

We had walked down to Peroulia Beach in hopes of some good photos. It had been gloomy all afternoon after short sharp showers. Only at sunset did the sky clear and the last light bathe the Messenian Gulf in shades of famille rose. It was all rather astonishing – a pink-blushed azure sea. And if at first the son of the deity was doggedly wading backwards across this seascape, presumably making a video on his phone and thus proving rather irritating to those of us who wished to take a photograph, when he turned to check his creation I decided he very much added to the scene.