The old railway bridge over the Mawddach River at Barmouth, Gwynedd, Wales

And mazy sands all water-wattled
Waylay her at ebb, past Penmaen Pool.

Black & White Sunday: Traces of the Past

We drove through one hundred miles of rain to reach it. From South Shropshire to the Welsh coast clouds piled on clouds and the rain dashed down the windscreen with only brief interludes of drizzle. Climbing and climbing the precipitous road through Dinas Mawddy, sky and mountains closed in, reminding us that we humans are rather puny ineffectual things, and that the motorized carapace that transports and shelters us may just  not be enough in a land like this. Even the sheep, inured to the place, stand hunched and motionless on the hillsides, backs to the downpour.

And then at last we’re here, on the banks of the Mawddach Estuary, just downstream of Penmaenpool, and the rain recedes,  leaving stillness and shadow, the slow curves of the river, Welsh Black cattle grazing the salt marsh, a buzzard calling, canoeists returning to base, and on the far horizon the knowledge of the sea, though unseen,  marked by a sudden flush of brightness out in the bay. 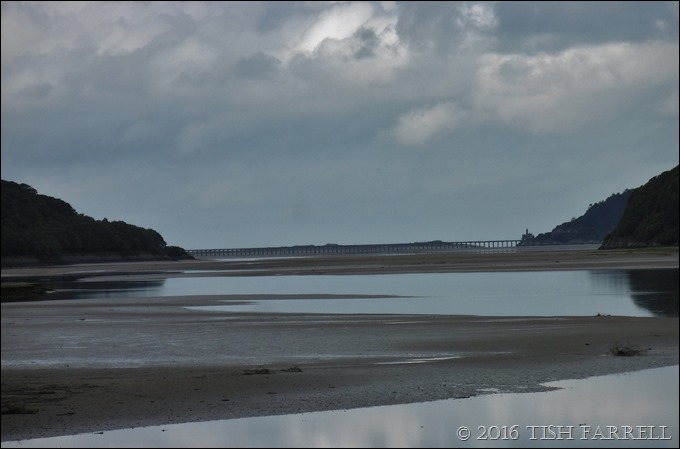 I’m on the last lap of Ailsa’s current challenge with this post. These photos were taken last September when we were staying near Dolgellau in Gwynedd, mid Wales. The Mawddach (roughly pronounced Mouthack) Estuary is a glorious place -for mountains, birds and all round peacefulness. You can walk or cycle beside much of it, too, following the Mawddach Trail that was once the railway line from Dolgellau to the holiday town of Barmouth.

The old toll bridge at Penmaenpool

We followed the route to the most southerly point where the Mawddach meets the sea, at the bleak little town of Fairbourne. You could call this place a failed resort. In the late 1800s, and after the arrival of the railway, baking flour magnate, Sir Arthur McDougall developed it into a holiday destination for English East Midlands workers. These days, though, it has a desolate air, although it does have a magnificent beach. We bought an ice cream at the dingy seaside caf,  but when we broached the sea wall to see the sea, it was so windy it blew our ice creams away and all over us. That’s not supposed to happen when you go to the seaside. Nor did we have Mummy to wipe us down. What a pickle.

Now that summer’s done, we take the Dol Idris path

For those like me, who live in the northern hemisphere, it might seem a touch perverse to post a photo of autumn leaves just as summer is expected. But then, of course, so many fellow bloggers south of the equator are heading into winter, so this is for you. Seasons greetings and all that.

Besides which, here in the UK most of us have been having autumn, if not downright winter weather for weeks now. June arrived with Met Office warnings of gales, plus torrential downpours. As I write,  the sky is filling again with fat rain clouds…

Enough already. Feelings of dryness are definitely required at Sheinton Street. I anyway love the spicy scent of autumn leaves, and especially crispy sweet chestnut ones, which these mostly are.

There is something mesmerizing about that sundried smell that opens up pathways to the past: forgotten houses, empty rooms, sun bleached floorboards, old cupboards and drawers exhaling remnant whiffs of their former contents, the sweet odour of decay. It’s all most beguiling, and hard to know if these are shreds of a remembered past, or some parallel universe barely glimpsed. Shall we take a ‘leaf’ from Alice Through the Looking Glass, and step through…?

Perhaps another day. The leaves are Welsh ones by the way. There were caught last year on a gloriously dry September afternoon, as we walked in a dream on the Dol Idris Path below the great  mountain of Cader Idris.  You can read about that walk here.

But now for the soundtrack to the photo, a song that I’ve loved since my first years on the planet Autumn Leaves/ Les feuilles mortes  sung here by the one and only Yves Montand. Oh, the tristesse: 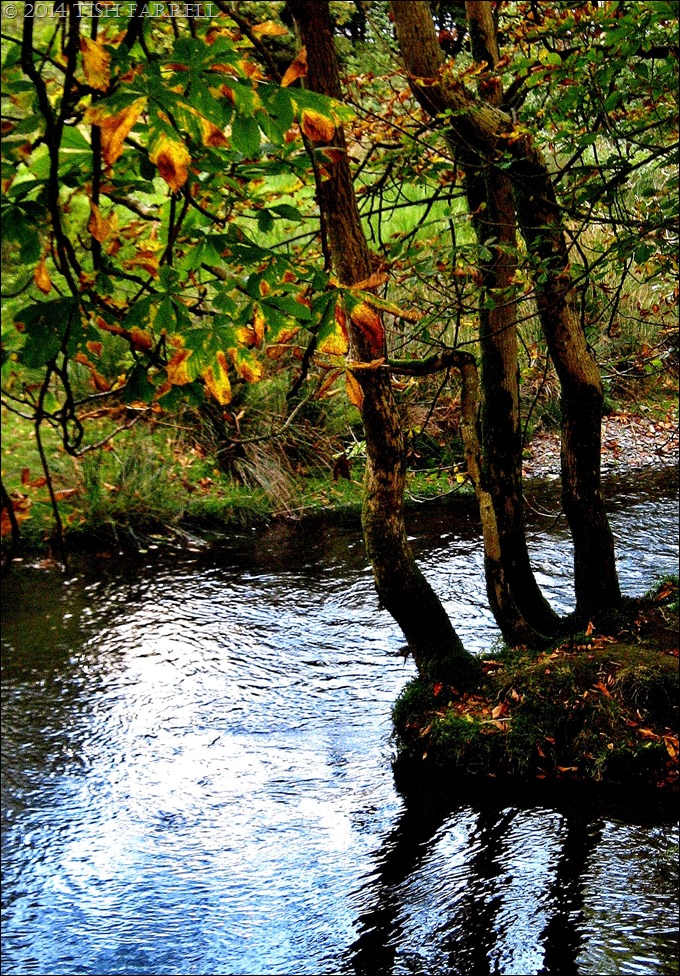 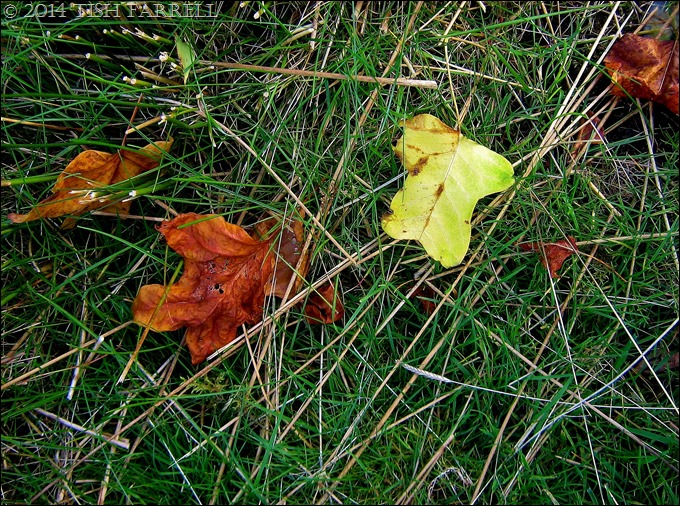 Here are some more photos from our recent walk below Cadair Idris in Wales. For the full story of all we saw there: Now that summer’s done, we take the Dol Idris Path

Thanks to Ed at Sunday Stills for his prompt Fall Foliage

This photo was taken on a recent trip to Wales. On a sleepy October afternoon we took a stroll beneath Cadair Idris, one of Snowdonia’s most spectacular mountains. I wrote about the walk in an earlier post. You can follow in our footsteps here: Now that summer’s done, we take the Dol Idris Path…

The other day I decided we should take a short break in Wales as we did this time last year. Back then we went to the Llyn Peninsula. On Thursday we headed further south, to Dolgellau in Gwynedd in north-west Wales. It’ is well under a two-hour drive from home, but given that the local guidebook states that the town ‘enjoys’ 70 inches of rain a year, it might seem a perverse choice of holiday destination, and especially in the autumn. All I can say was we were very lucky. For four whole days the weather was fine, the sun often hot, and when it did rain, it did so while we slept. What could be better?

Dolgellau (Dol-gethl-eye) is an ancient market town, once prosperous as a centre of the wool trade.  Today, agriculture, especially sheep and cattle rearing are still important, but tourism has now become a mainstay. And for those who relish outdoor pursuits of every kind, then this part of Wales has pretty much everything on offer, and all set in the most stunning mountain landscapes.

Perhaps the most dominant feature in this locality is Cadair Idris, seen here in its lower reaches from the Dôl Idris Path, a few miles outside the town. 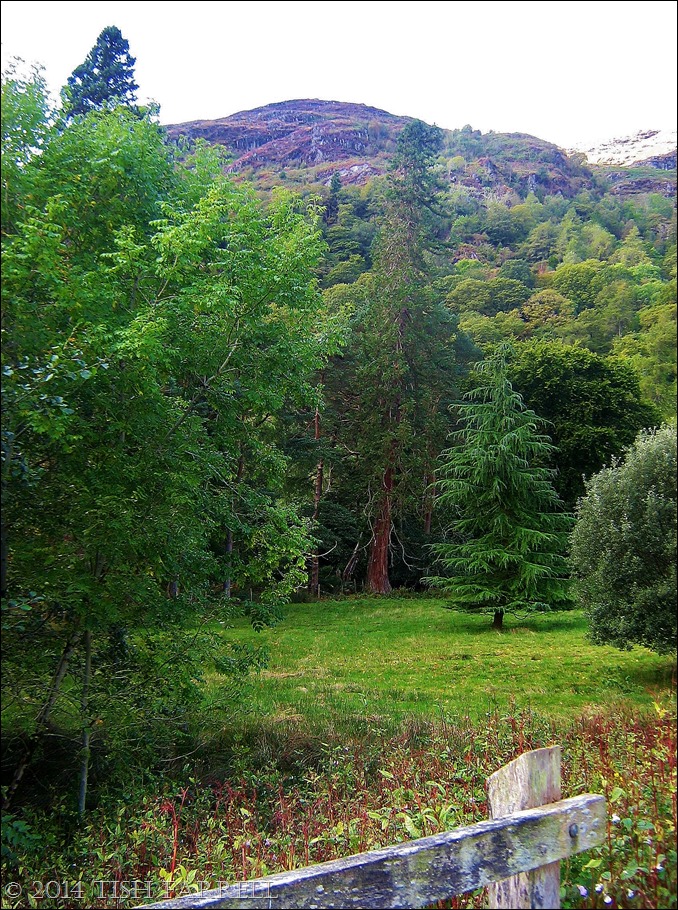 The mountain is 893 metres (2,930 feet) high, and there are several routes to the summit, but the most direct one strikes off  almost vertically from the Dôl Idris Path, which itself is a short, level route created for those who wish to stroll on the horizontal. (That would be us). So we were not tempted to take the winding stairway up the hillside, this despite its splendid setting beside a roaring waterfall. We had read the guidebook and learned that those steps mark the start of 3.8 kilometre (2.4 mile) ever-upwards haul that includes a 300 metre (1,000 feet) cliff scree face. It would take five hours to go there and back, and besides which, there was also the legend to consider. This says that anyone who spends the night on the mountain will wake up either  mad or a  poet.

We couldn’t risk it, not even for a brainstorm of bardic eloquence. Instead we took photos, but only after we had visited the tea-room and eaten chicken curry and rice (me) and a bacon sandwich (G) while watching nut hatches on the bird feeder outside the window. (All Farrell safaris must include tea rooms, coffee houses and restaurants). Also, while we were there, we viewed the cartoon about Idris the Giant, who uses the mountain as his armchair (cadair) while gazing up at the stars. And finally, we peered uncertainly at the bat-cam video that mistily revealed to us rare and roosting horseshoe bats who live in the tea room roof space. Bats in the attic. That was  somehow pleasing too. 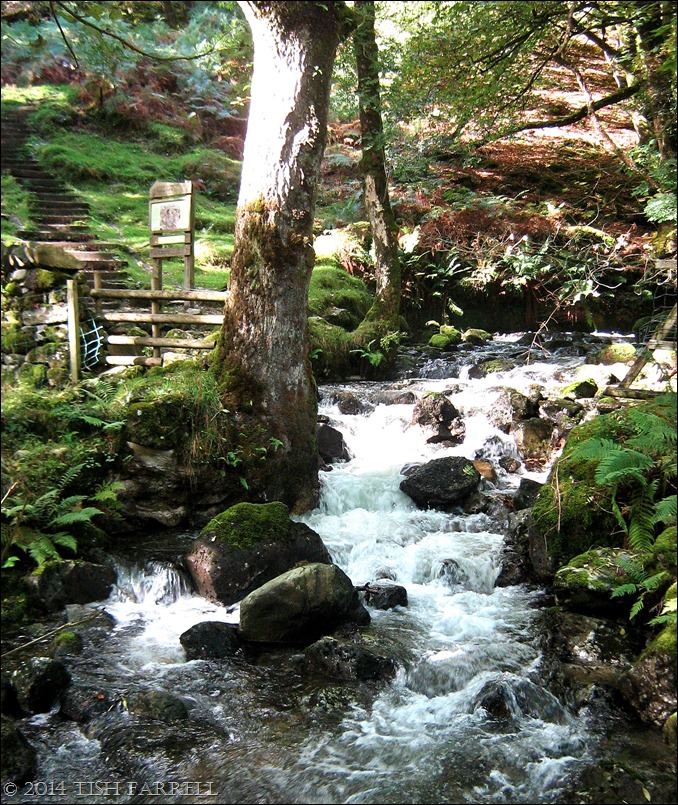 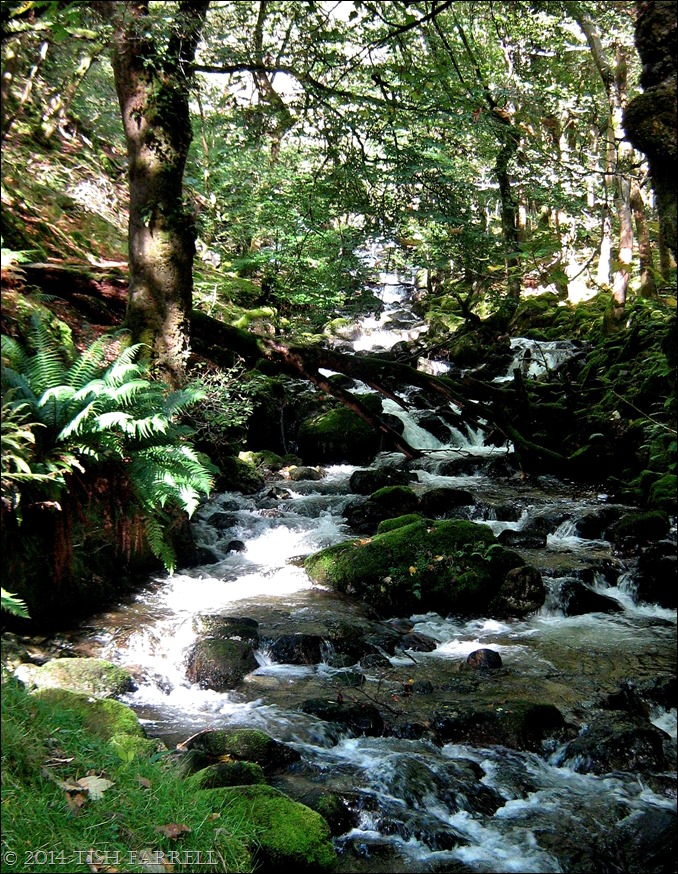 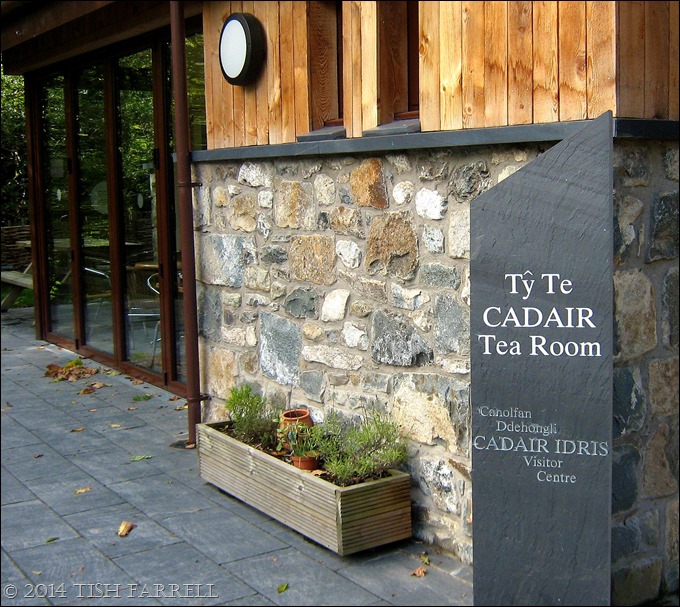 The food in the cafe was really rather good, but once back on the path we found still other diversions. There was the spotting of bat boxes in the trees. Apparently 9 species are catered for. I didn’t discover the exact purpose of the boxes – emergency roosts for dirty-stop-out bats caught out in the daylight while still far from  home? 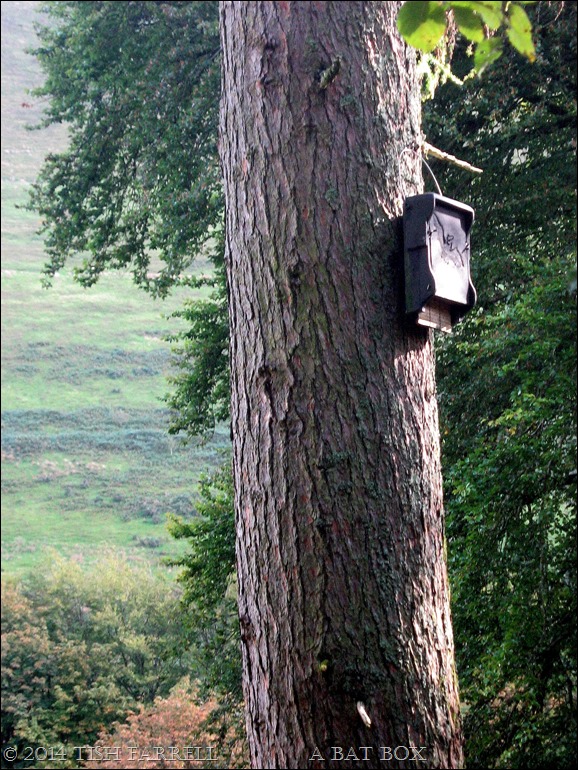 More curiously, at the foot of the mountain path, we found the ruined remains of Idris soft drinks company’s research laboratory.  And yes, it does look more like a barn. It is hard to imagine that, in its day, a cutting-edge business empire based on non-alcoholic fizzy drinks, had its  roots  in an isolated valley below Cadair Idris. The company even went on to supersede Schweppes as the sole soft drinks purveyor to HM Queen Victoria. 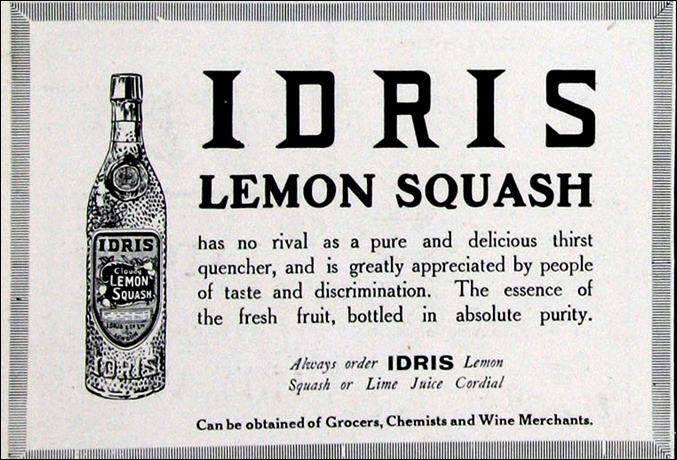 The founder of the company, a successful Welsh chemist called Thomas Howell Williams, began the laboratory in 1873. The Temperance Movement was gathering momentum at this time, and the production of cheap, non-alcoholic, and (apparently) healthy drinks was welcomed.  Why Williams chose this site in particular is not exactly clear, but he was so impressed by the mountain’s splendour that he changed his name by deed poll to Thomas Idris. He also became known as The Ginger Beer Man, and all these years on, Idris Fiery Ginger Beer is still produced, albeit under the Britvic label.

In the 1980s the Idris family gave the land to the Snowdonia National Park Authority and, in the last few years, a flat, circular path of just over a kilometre has been created to cater for all who wish to enjoy what remains of the Idris parkland domain. There is an ornamental lake with wild balsam on its margins, specimen trees dotted here and there, a fish ladder and weir to examine, secluded tables for picnics, a chestnut tree avenue, streams to walk by, and of course the tea room for the scones and carrot cake we didn’t have the first time round.

On our slow wandering we did not see the buzzards, kites or peregrine falcons noted on the tea room’s  recent ‘bird sightings’ board, but it was a fine walk on a fine autumn day, and so thank you Mr. Idris for your gift to the nation – to Wales that is, and thence to the United Kingdom that derives only the greatest benefit from the sum of its peripheral lands’ magnificent places. 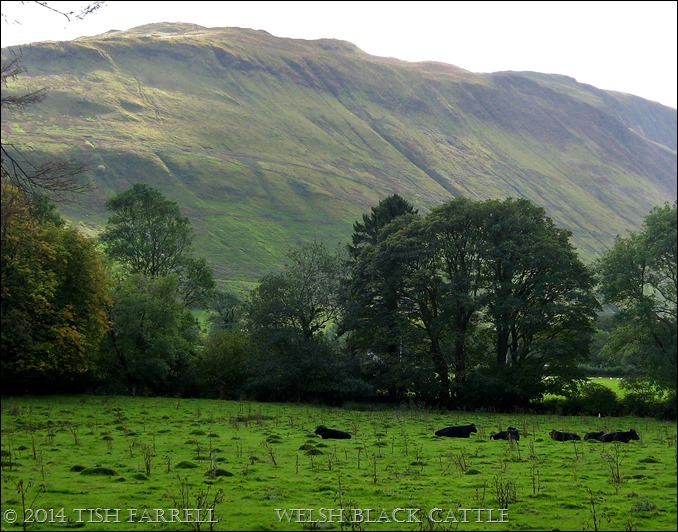 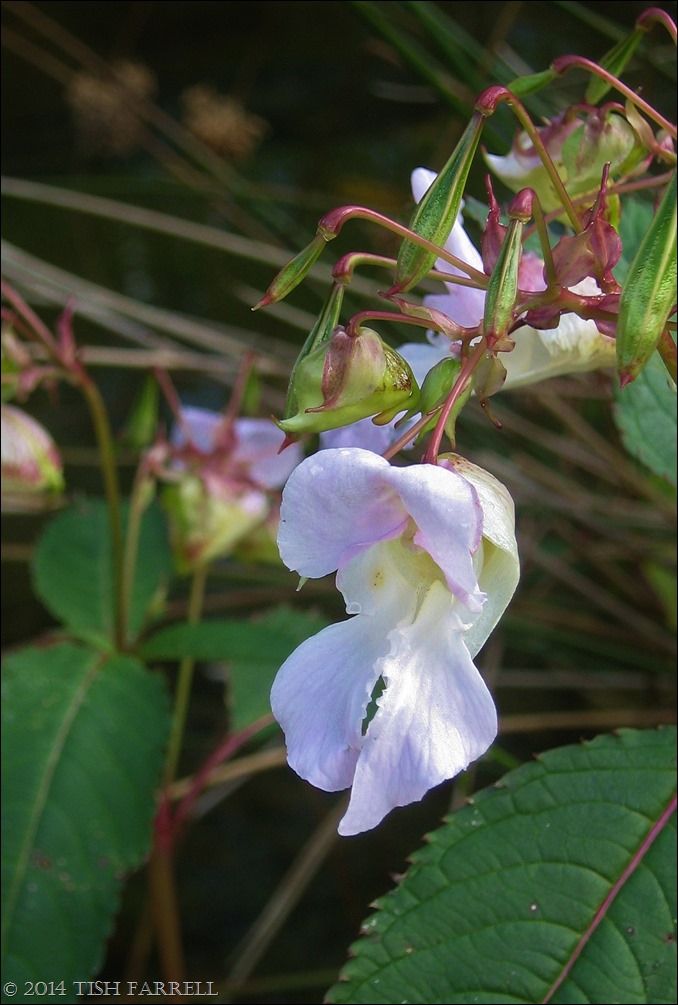 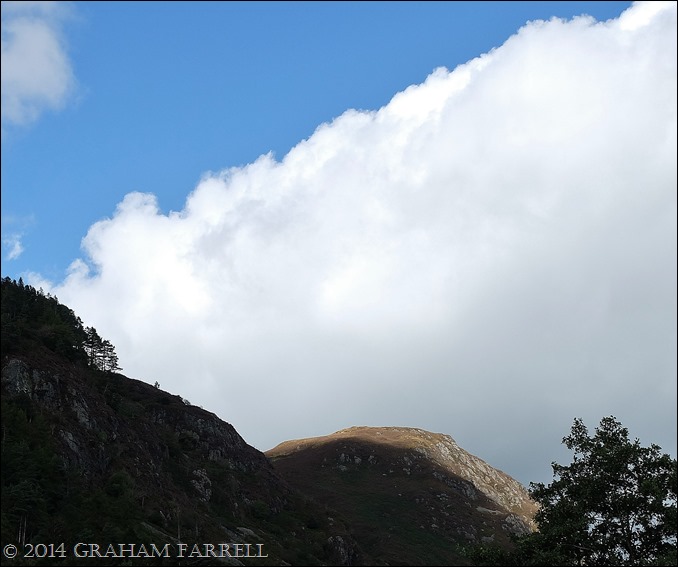