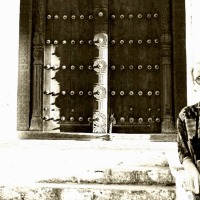 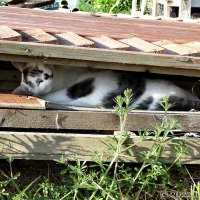 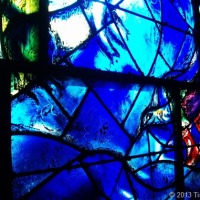 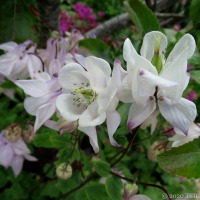 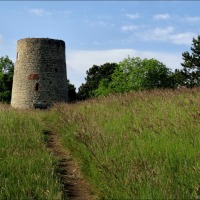 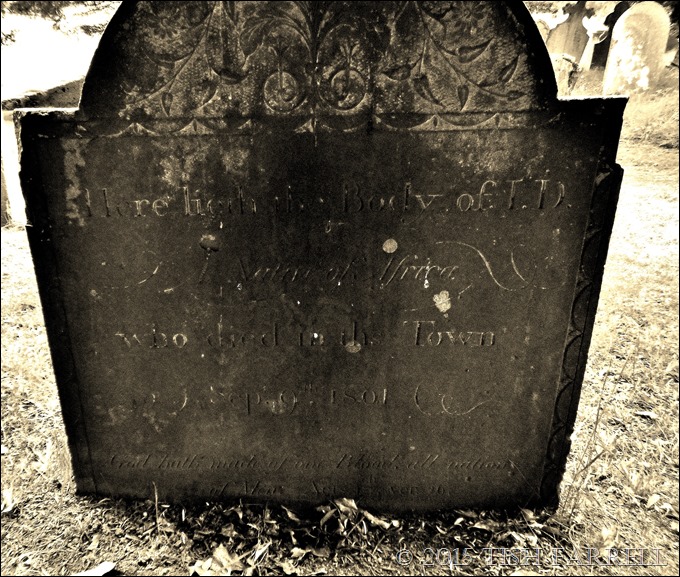 Here lieth the Body of I. D.

A Native of Africa

who died in ths Town

Our recent outing to the Bishop’s Castle Michaelmas Fair (see Summer came back on Saturday and took us to the fair) wasn’t all giant bubbles, stilt walking and steam traction engines. In the graveyard of St John the Baptist parish church there is a mystery. In the north east corner, and well shadowed by English ivy, holly and hazel is the finely carved gravestone dedicated to an African whose only identity is indicated in the letters I.D.  Also, unlike the other memorial stones, the inscription is sited on the western rather than the eastern face. It is hard to read now, and even harder to photograph. 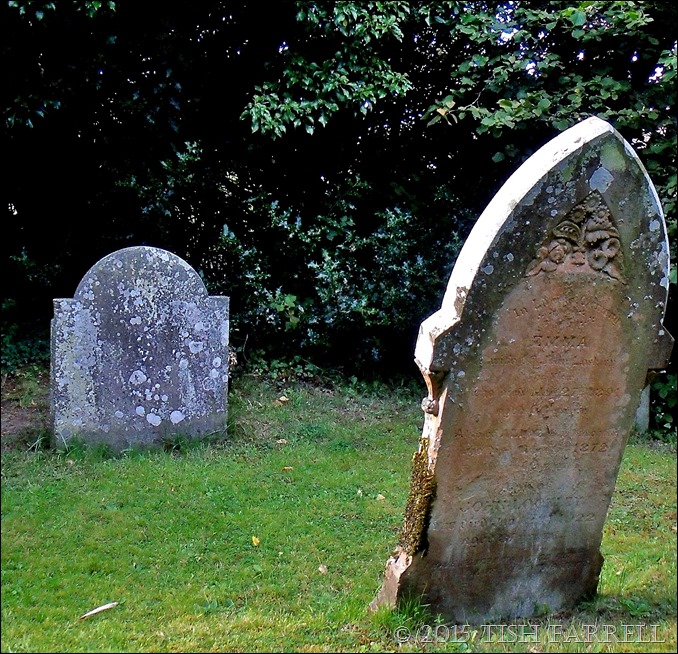 There seems to be some strong indication (see the quote below) that I.D. stood for John Davies. ‘I’s’ were often used interchangeably with ‘J’s’ in old records and inscriptions, and the only burial record for around the date on the gravestone 9th September 1801, is for one John Davies on the 12th of that month. There is apparently some original annotation in the church record that links this name to the gravestone.

So what can be deduced from this scant evidence? Clearly whoever undertook to bury the African did not spare any expense. The stone is beautifully carved. The Bible quotation also indicates their disposition towards equality in a line that was also quoted by slavery abolitionists such as Dr Joseph Priestly. I.D. may not have been a slave at the time of his death, but a free man and/or the servant of a rich landowner. It was usual for slaves to be given their masters’ names. Yet the elegance of the stone itself indicates someone who had attained high status, and was very highly regarded.

In an interesting article in the  South West Shropshire Archaeological Society no 19, 2008, Judith Payne discusses the evidence. Firstly, she says no record can be found of a John Davies living in the town of Bishop’s Castle. However, this does not preclude his being a slave or servant – perhaps to gentry who owned a house locally as well as elsewhere. It had long been the fashion for wealthy Britons to have black servants.

She also suggests that he might have been travelling with someone connected with the abolitionist movement, since abolitionists were active and had much support in Shropshire. A 1790s petition against slavery delivered from the county was nine and half feet long, and in November 1793, Thomas Clarkson, a prominent campaigner, was known to be visiting Bishop’s Castle.

Another possibility is that I.D. belonged to the household one of the land-owner politicians who around 1801-2 was attempting to end  the Clive family’s political control of the town. Bishop’s Castle was a notorious rotten borough.  Payne also posits that the reason for the simple I.D. instead of the full name, was because whoever buried him, knew that this was not his true name. That he was placed in a Church of England graveyard further implies that he was a Protestant.

I also had the notion that whoever had I.D. buried, might not necessarily have known him. They were perhaps some local benefactor with a passion for abolition, someone who wished to make reparation for the shame of slavery by giving some poor itinerant black man a decent burial.

And there we have it. The mystery remains. But the stone itself has been listed by Historic England. Here is what they have to say:

We have no absolutely certain information about the person commemorated by this headstone. However, the burial register records the internment of John Davies on 12 September 1801, and contains an historic annotation linking Davies with the I.D. tombstone. Shropshire is not notable for its links with the West Indies and the slave trade, but it seems likely that ‘I. D.’ came to Bishop’s Castle or to one of the country houses hereabouts, at least initially, as a servant. The quality of the headstone, with its elegant inscription and decoration, suggests that the person commemorated held a certain status, whether as a servant or not. The biblical quotation is one sometimes employed by abolitionists, and its levelling sentiments suggest that the person responsible for erecting the memorial was sympathetic to the movement. The positioning of the tomb is very curious, it being turned away from the other graves in the area. This headstone faces west, towards an ancient yew tree; the inscription is therefore hidden from general view. 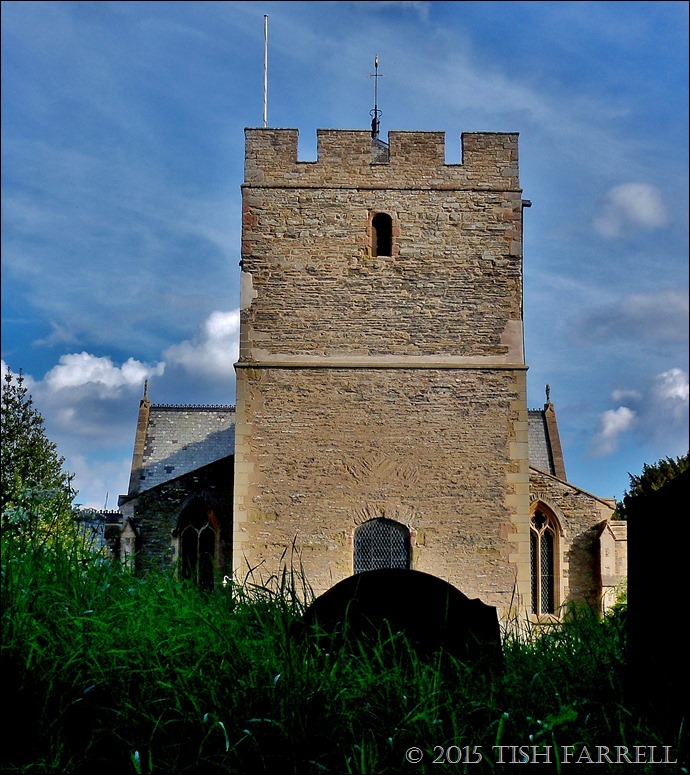 We are not ones for religious dogma in the Farrell household, but as we left I.D.’s grave, and walked away from this picturesque English churchyard, we were heartened by this small monument of human compassion with its fierce sense of justice. Why in the name of the universe does skin colour matter? Why should people be judged superior on the basis of whiteness. Why do many still look down on people of colour because they were once enslaved? If the palaeontologists are correct, we are all Africans under the skin. And if Africa is where we evolved, then everyone’s ancestors would have been some shade of brown.

But this unsolved mystery is not the end of this particular story. At the top of Bishop’s Castle’s steep main street that leads up from the church, we came upon a current and timely expression of human compassion. Someone had placed a notice in the window of their house: 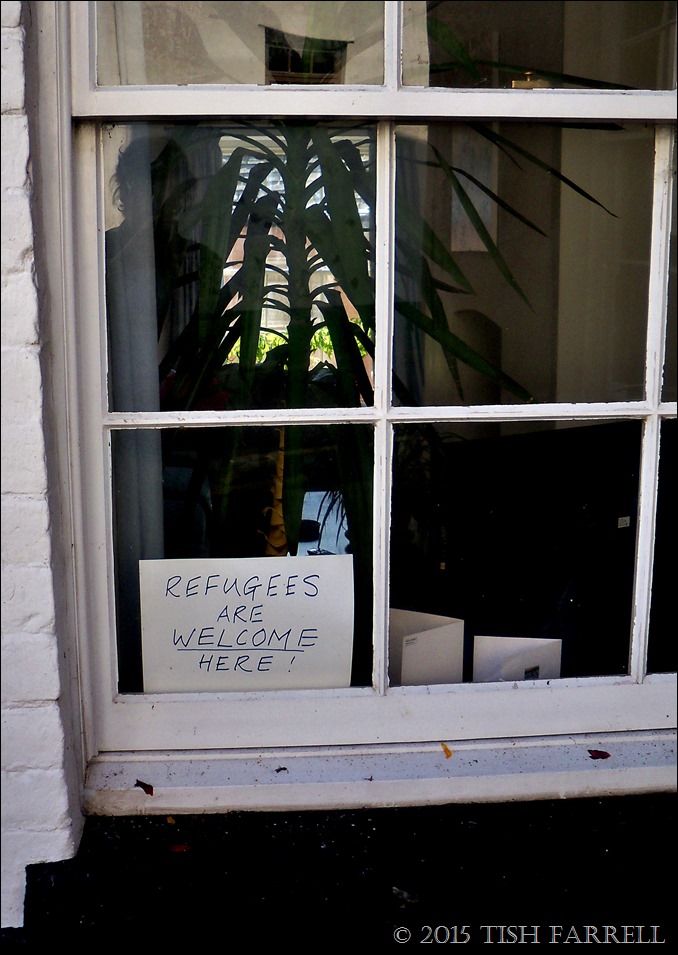 Written in response to Ailsa’s Travel Theme: letters – and commemorating a visit to Bishop’s Castle where different ‘letters’ came together to form powerful messages of common humanity.