As hills go, The Wrekin (pronounced REE-kin) in my home county of Shropshire is not very high – just over 400 metres (1300 feet) . But then, as estate agents say, location is all, and this is the only big hill for miles around. It rises over a county of farm fields and the flatness of the Shropshire Plain beyond, and thus is a useful landmark when navigating the county’s ancient network of sunken rural roads. It has also long loomed large in local imagination. As with significant natural features the world over, it gives people something to think by, prompting many a tale and joke.

For instance, we have a saying whose usage extends into neighbouring  counties. To go all round The Wrekin means to ramble on for hours before arriving at the point. Hopefully not exemplified in this post. Because yes, I will get around to Giant Gwendol before too much longer. But first some geology. Please don’t groan. I’ll make it snappy.

Looking at the photograph above, the first thing that strikes you is that the hill looks like an old volcano, and I seem to remember being told that it was in year 3 geography at secondary school. This apparently is not the case, although it is composed of volcanic rock. The vent that spewed it out is no longer around or visible. This is perhaps worrying. One has to put faith in notions of volcanic dormancy and, since the spewing forth of rhyolites, tuffs and agglomerates took place in the Precambrian some 680 million years ago, we can perhaps rest easy in our beds: Shropshire has had long enough to get over its hot phase.

This is also good because as you can see from the second photo, the place where I live, Much Wenlock, is rather close to The Wrekin. The yellow wheat field in the middle ground is behind my house.

But now for the Gwendol story. 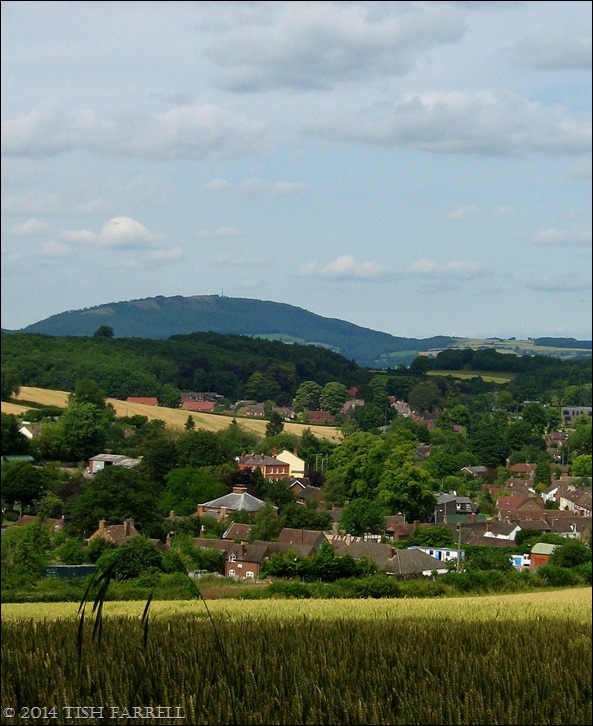 There once was a Welsh giant called Gwendol. For reasons unknown he had conceived a grudge against the mayor and townsfolk of Shrewsbury, in the neighbouring county of Shropshire. Since the town lay within a nearly closed loop of the River Severn, Gwendol came up with a dastardly plan. He would dam the river and so drown the town and all who lived there.

He set off from Wales with a great spadeful of earth to do the deed, and headed for Shrewsbury. He tramped for mile after mile, but somehow lost his way, ending up instead near the town of Wellington. Weary with the search, and from carrying a heavy load, he sat down to rest.

After a time, an itinerant cobbler came walking by. He had walked from Shrewsbury and was heading for Wellington. Over his shoulder he carried a big sack of used shoes for mending.

Gwendol stopped the man and asked for directions. He even told the cobbler his plan to fill in the River Severn and so drown Shrewsbury and all who lived there.

The cobbler was horrified, and especially appalled at the prospect of losing so much trade.

“Oh dear me,” he told the giant, “that town is so far away. Many days’ walk.” Then he opened his sack of  old shoes. “See,” he said. “I have worn out all these shoes and boots walking from Shrewsbury.”

At this, the giant groaned. “I am too tired,” he said, “to carry my load of dirt that far. I had better leave it here.” And so he emptied it out there and then and, as a parting shot, before setting off back to Wales, he cleaned the mud from his own boots, and so left behind little Ercall, the small hill that stands nearby.

And so now you have the true story of how The Wrekin was born. In fact, for a not very bright giant, I think Gwendol did a pretty good job, landscaping-wise. Also the damming plan would never have worked. Old Shrewsbury town may sit inside the loop of the River Severn, but it is also on a very steep hill. Just as well, though, that Giant Gwendol trudged back into Wales and was never heard of more in Shropshire. 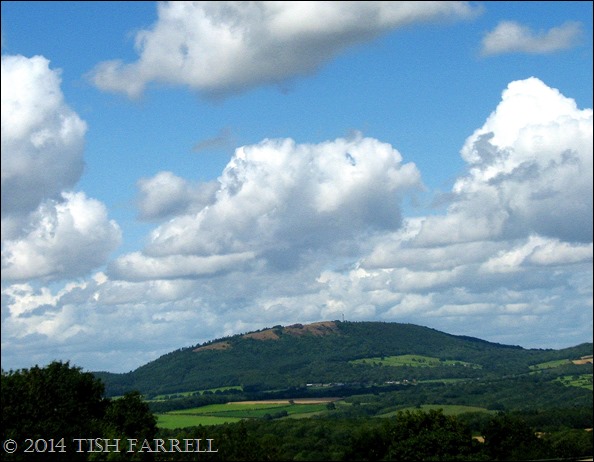 SOURCE: This tale appears in Charlotte Burne’s Shropshire Folklore 1883. In other versions the Devil is the hill-builder.