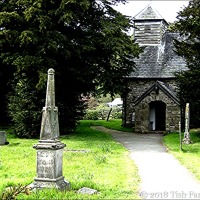 The fat Bramley apples came from the Women’s Institute market, held in Much Wenlock every Thursday morning. The trestle tables are set out in the old Corn Exchange outside the library and are invariably laden with home-baked cakes – Lemon Drizzle, Rich Fruit, Iced Ginger, Millionaire’s Shortbread. Then there are the jams and marmalade.

But in recent weeks – this being the season of over-laden fruit trees – there has also been garden produce, and in particular bags of Bramley cooking apples. And what better thing to do with a Bramley than to bake it, stuffed with the last of the allotment raspberries?

The raspberries are called Autumn Bliss, and deliciously live up to their name; and especially so when added to apple. The synergy of hot, fruity flavours hits every taste bud with a satisfying zing.

This is how I cooked them.

Per person: one apple, a handful of fruit, a good teaspoon of honey, a sliver of butter

With a corer or sharp knife carefully remove the apple middles, making sure all  tough core bits are excised.

Remove the peel from the upper half of the fruit, then place in a greased oven-proof dish.

Stuff the apple centres with raspberries, adding a good teaspoon of runny honey to each apple. I used fair trade wild Zambian honey, which is cold-pressed, and has a rich, slightly smoky flavour.

Scatter any spare raspberries over the top.

Slather a small nugget of  farmhouse butter over each apple.

Add half a cup of water to the dish.

Bake for around 30 minutes, basting with the juices half way through. Bramleys have a habit of exploding, as mine were about to do, so keep an eye on them.

Desert apples can also be baked, though they need longer, slower cooking and must be well basted. The result is not as ‘fluffy’ as a Bramley, and it’s better to remove all the peel. But desert apples often have a more distinctive flavour. Dip them first in in  water with a squeeze of lemon to stop them discolouring.

Of course there are endless variations when it comes to stuffing apples. A good old English version is to use sultanas and raisins with a dollop of Golden Syrup.  You could make my version more sophisticated with a drizzle of an appropriate liqueur. Armagnac springs to mind. Or Creme de Cassis. And serve with some toasted almond flakes. But however you make them, they always go well with Greek yoghurt. (Or thick farmhouse cream…)