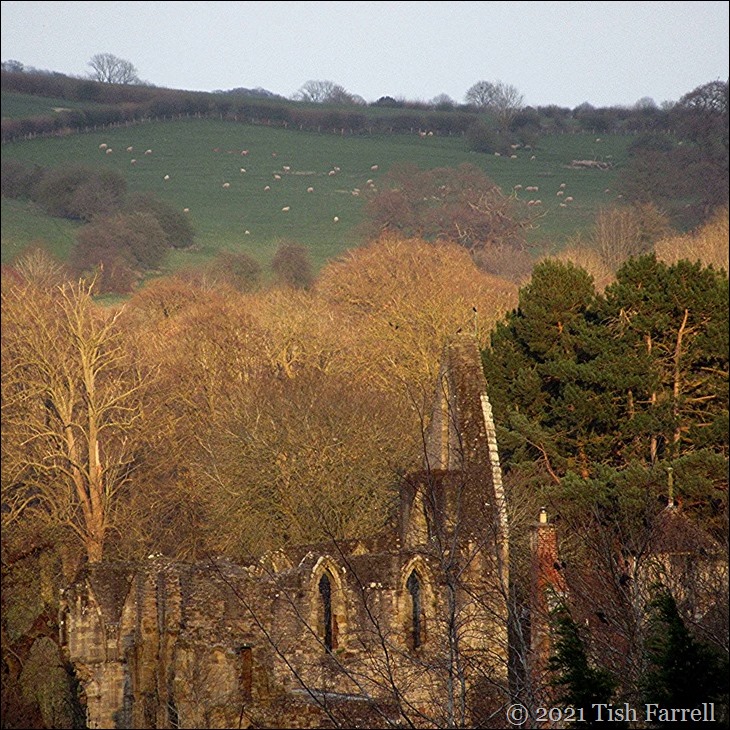 There is a noiseless little railway running through the valley, and there is an ancient little town lying at the abbey-gates – a town, indeed, with no great din of vehicles, but with goodly brick houses, with a dozen ‘publics’, with tidy, whitewashed cottages, and with little girls…bobbing curtsies in the street. But even now, if one had wound one’s way into the valley by the railroad, it would be rather a surprise to find a small ornamental cathedral in a spot on the whole so natural and pastoral. How impressive then must the beautiful church  have been in the days of its prosperity, when the pilgrim came down to it from the grassy hillside, and its bells made the stillness sensible.

Henry James on Much Wenlock Portraits and Places

A long shot taken back in early February. I was probably standing on the higher slopes of Townsend Meadow, further up the field from the gap in the hedge to the allotment and challenging my camera’s zoom facility to its limit. Here then are the elevated remains of Wenlock Priory’s erstwhile church along with next-door roof glimpses of the Prior’s House, now a private home called The Abbey.

You can also see a cluster of Corsican Pines. I’ve no idea who planted them or why, but there are three groves of them around the Priory so I’m assuming the Milnes Gaskells who once lived at The Abbey (and had Henry James to stay on several occasions and also had the ruins as their own personal garden feature) may have been responsible for their arrival. They are anyway magnificent trees.

There’s more about The Abbey, the Milnes Gaskells and Henry James’ visits at an earlier post: Going behind the scenes in Wenlock Abbey

And also at: When Henry James came to Wenlock

30 thoughts on “Of Times Past”