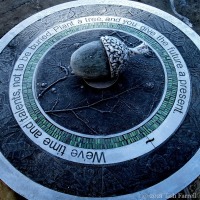 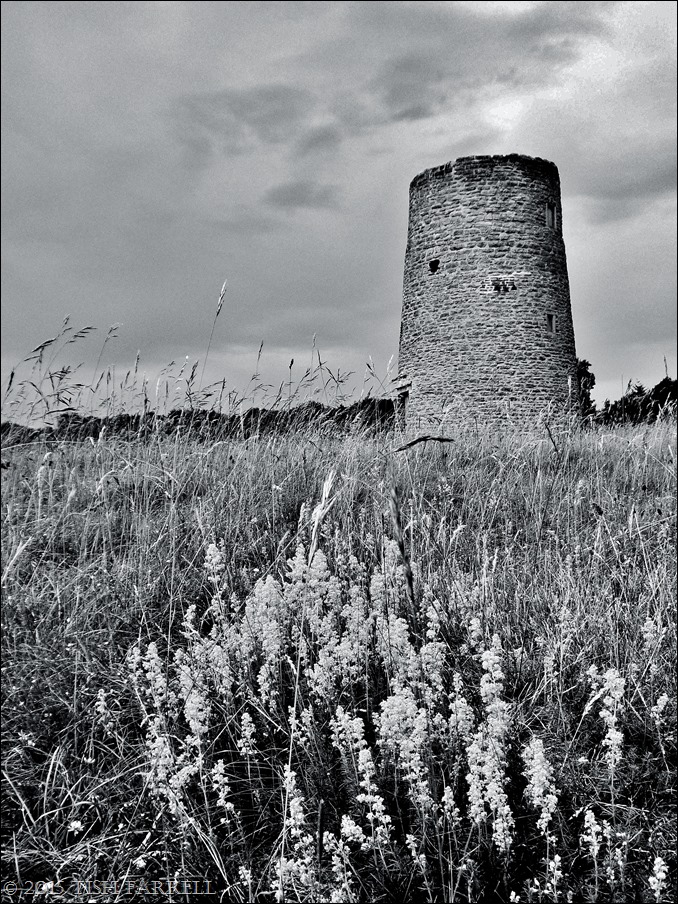 In this week’s Black & White Challenge, Cee is asking us to focus on subjects that are more than fifty years old. I’m pretty confident, then, that my home town of Much Wenlock more than fits the bill. As a settlement, it has been continuously occupied for the last thousand years.

The town windmill (seen above) is not quite that old. I’ve begun with it because it is the oldest structure near my house. It  was busy grinding corn from around 1655. Then a lightning bolt struck it in 1850, and it has remained sail-less ever since – either a pity or not, depending on your views on historic conservation.

On the other hand, I perhaps needn’t have gone as far as the windmill. You might say my own house is something of a minor monument age-wise, much like its inhabitants (?).  It’s original half dates from the 1830s. In the living room there’s a massive inglenook fireplace complete with bread oven that defies my attempts to photograph it well, so you’ll have to imagine it. Instead I’ll take you on a walk down Sheinton Street to see a few of the other sights. 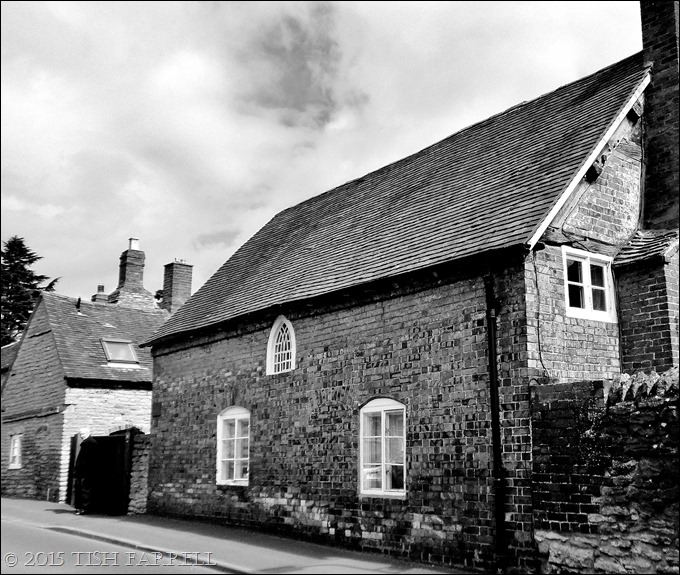 Heading into town, there are here-and-there signs of the medieval origins of many of the cottages, their timber frames concealed or disguised by brick and stone exteriors that have been added in more recent centuries.

Most of these cottages would have once housed artisans, their workshops opening directly onto the street to catch the eye of potential customers. The living quarters, and gardens would have been behind the workshops. In fact, the layout of long medieval burgage plots behind these Sheinton Street properties, and now pretty gardens, are still visible from the field path.

Today, Much Wenlock is a sleepy sort of place, much gentrified, and up-marketed. But step back a couple of hundred years, and much of it would have been grimy and industrial. Not only was there quarrying and limestone burning going on around the town, but within it were once the smoking kilns of the clay tobacco pipe manufacturers, stinking pits for the curing and tanning of hides for leather working, horses and carts churning up the dirt. Brewing was  also a big local trade, as were slaughtering, pewtering, smithing, weaving, and hat and shoe making. The unmade streets were alive with taverns to wet the throats of dusty quarrymen, and the final touch, ambiance-wise, would have been provided by the malodourous effluvia of the Schetbroke, an open sewer of a stream which ran through the town (but now happily culverted). 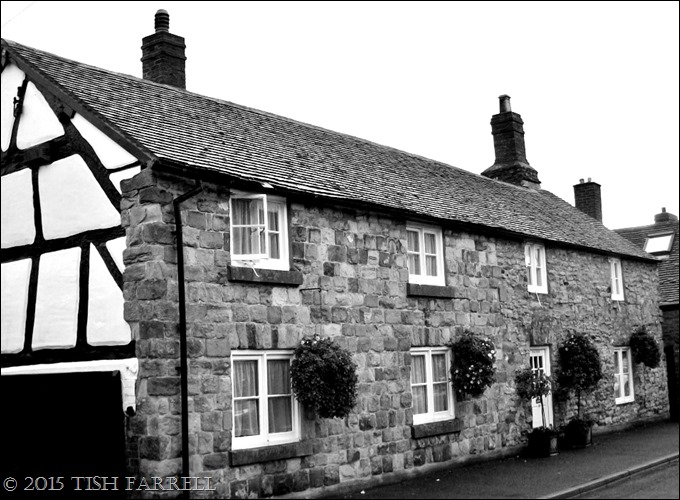 I don’t know the particular history of this rather grand cottage seen above, but it’s a good example of a later stone frontage added to a much older building. Most of the town’s stonework has in fact been recycled from its medieval priory, dissolved by Henry VIII in 1540. 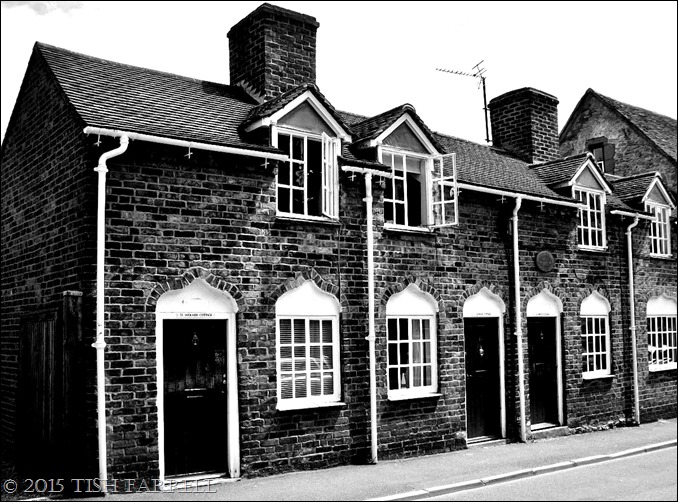 In amongst the antiquity we can also find more recent buildings. For instance, in the space between  medieval neighbours is this little set of picturesque alms houses built in 1810. They are known as Wolmer’s Alms Houses, a charity founded in the town in 1485. They are still operated on a charitable basis for the elderly. I love the brick ogival arches over the doors and windows. 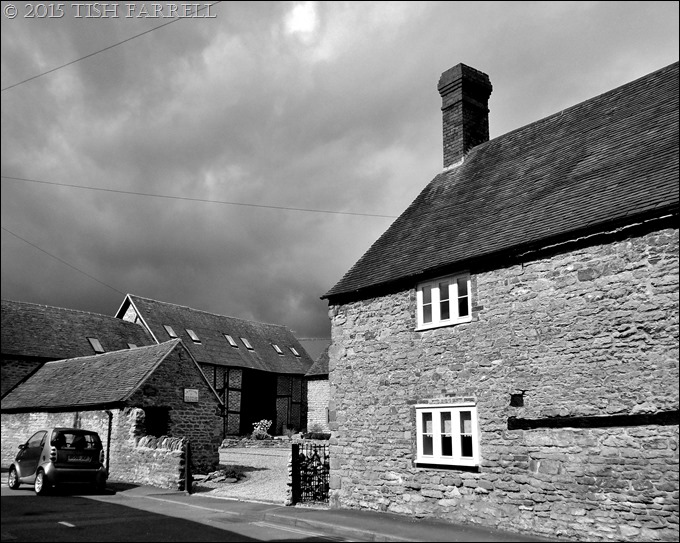 At the end of Sheinton Street is Brookhouse Farm. It is now a residential enclave of smart barn conversions, but until fairly recently was one of the last surviving examples of England’s town farms.  I can still remember it in the 1990s as a very rustic farmyard with cattle in the barns. The farmhouse in the foreground was stone-clad in the early 1700s, and is one of several Much Wenlock houses with a medieval hall concealed within it. You might call this the Chinese Box school of architecture.

…so named after the unsavoury pursuit of bull-baiting that went on here until the early 1800s. By then the timber-framed building  had stood for some 200 years, while Holy Trinity Church, seen behind and in the next photo, stands on the site the Saxon women’s church of St Milburga’s Abbey, founded in c.680 AD as a religious house for both nuns and monks. The oldest part of the present church is the nave which dates from 1150. Other parts were constructed in the 14th and 15th centuries.

During monastic times, Much Wenlock was ruled by the Prior under ecclesiastical law. After the dissolution in 1540 a new civil courthouse had to be built. It stands just across the Church Green, and marks the centre of the town. These days the ground floor is the venue for our various markets, while upstairs houses the original law court (now a gallery) and the council chamber which is still used for all Town Council meetings, and has to be one of the most uncomfortable, if august, venues in the whole town. 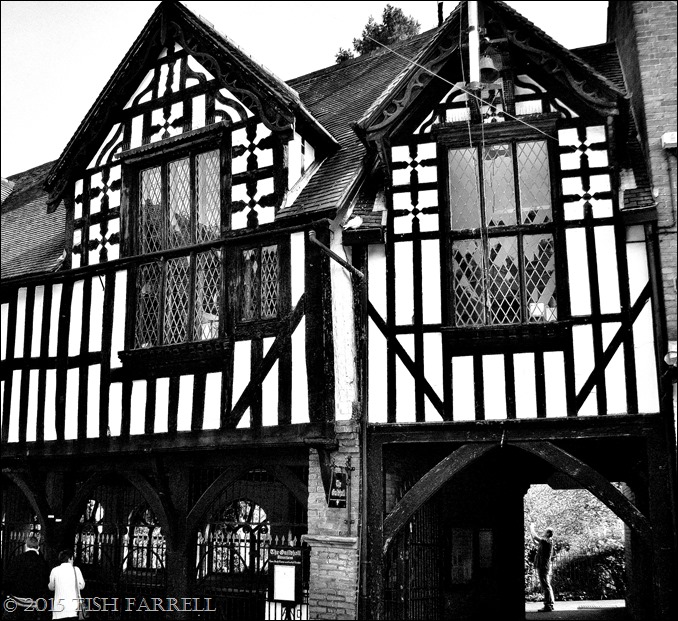 And now we’ll double back on ourselves. Please head under the arch (look out for the man with a camera) and cut across the Church Green for our last stop on this tour – a quick look at Much Wenlock Priory.

This is the view from the lane, where the site’s perimeter is shaded by soaring Corsican Pines. We’ll need more time to make it worthwhile buying a ticket to go inside, so I’ll leave you with a photo from one of my earlier visits: a close-up of the monks’ lavabo where they used to wash before entering the refectory to take their meals.

The carved panel dates from c.1180, which is odd, actually. I could swear one of the saints is on his cell phone.  Not so much religious texts, as a direct call to the Almighty?

In Part 2 I’ll take you on a black and white stroll up the High Street.