I love the way this little girl is much happier to play on  the railings than notice the wonder of this bridge,  a bridge that in its day was considered a world wonder. Nothing like it had been constructed before. It was opened to the public on New Year’s Day 1781, and right from the start was a visitor attraction, seized on by both coach operators and hotel proprietors to boost their trade. In the summer of that year The Swan Inn (which is still in business today, and for much the same reason) pronounced in an advertisement that is was:

situate near the most incomparable piece of architecture, the Iron Bridge.

One of the companies for the Shrewsbury to London route also made much of the fact that travellers would be passing:

that striking specimen of Art and so much admired object of travellers.

Today the bridge may seem quaint, and the manner of its construction somewhat bizarre, since it utilises wood joinery techniques in its iron rib-work.  But for all that, we are talking major, life-changing innovation: something akin to the technology boot-up begun in Silicon Valley. Here, though, we have a rural Shropshire valley, otherwise known as the Severn or Ironbridge Gorge in Coabrookdale. It is just a few miles from my house and, with its steep banks of hanging woodlands, and the mostly tranquil river below, it seems an unlikely location for epoch-changing events.

Yet this bridge was the first of its kind in the world, and thus a proving ground for what could be achieved with hitherto untried applications of cast iron.  It led to the iron framed factories of the Industrial Revolution, and was a step on the way to the sky scraper. The growth in demand for iron and steel products for shipping and steam engines and weapons put the great in Great Britain. Iron made the country rich, and gave it the wherewithal to set off conquering the planet.

From the outset then, the Iron Bridge was very much as a PR stunt, and although there were practical considerations – including replacing a very dangerous ferry crossing wherein Severn coracles were used to transport people (mostly large numbers of workers) between the town of Broseley on one bank and Coalbrookdale on the other, the main object was to prove the worth and usefulness of cast iron. Its builder was Abraham Darby III, the third generation of the Quaker iron founding dynasty that operated in Coalbrookdale from the early 1700s . The other Darby family claim to fame was Abraham I’s discovery of how to cast iron using coke instead of charcoal, which did much to halt the decimation of the nation’s forests, and was a piece of technological mastery that had been called for back in the reign of Queen Elizabeth I. In fact she offered a prize for anyone who could do it. She needed timber for her navy. She did not want it going up in smoke in furnaces and forges.

But back to the Iron Bridge. The design was roughly based on drawings by Shropshire architect Thomas Farnolls Pritchard, but there were many changes in the course of construction, and he did not live to see the finished project.  The site was not only difficult, but the bridge builders had further set themselves the task of creating a single span that was high enough to allow large Severn sailing trows to pass beneath without the nuisance of lowering their masts as they had to do for all the River Severn’s other bridges. This objective alone could have scuppered the project. The raising of the iron ribs proved an epic undertaking on a river that is prone to massive floods, and whose banks are not stable.

Visitors came from all over Europe to see the finished product. They included artists, princes and Swedish industrial spies. The Severn Gorge was likened to Hell with its burning lime and coke kilns, furnaces and forges. The eighteenth century tourists came and gawped with horrid fascination. I will leave you with one such response made in 1801 by popular song writer, Charles Dibdin:

…if an atheist , who had never heard of Colebrook Dale, could be transported there in a dream, and left to wake at the mouth of one of those furnaces, surrounded on all sides by such infernal objects, though he has been all his life the most profligate unbeliever that ever added blasphemy to incredulity, he would infallibly tremble at the last judgment that in imagination would appear to await him. 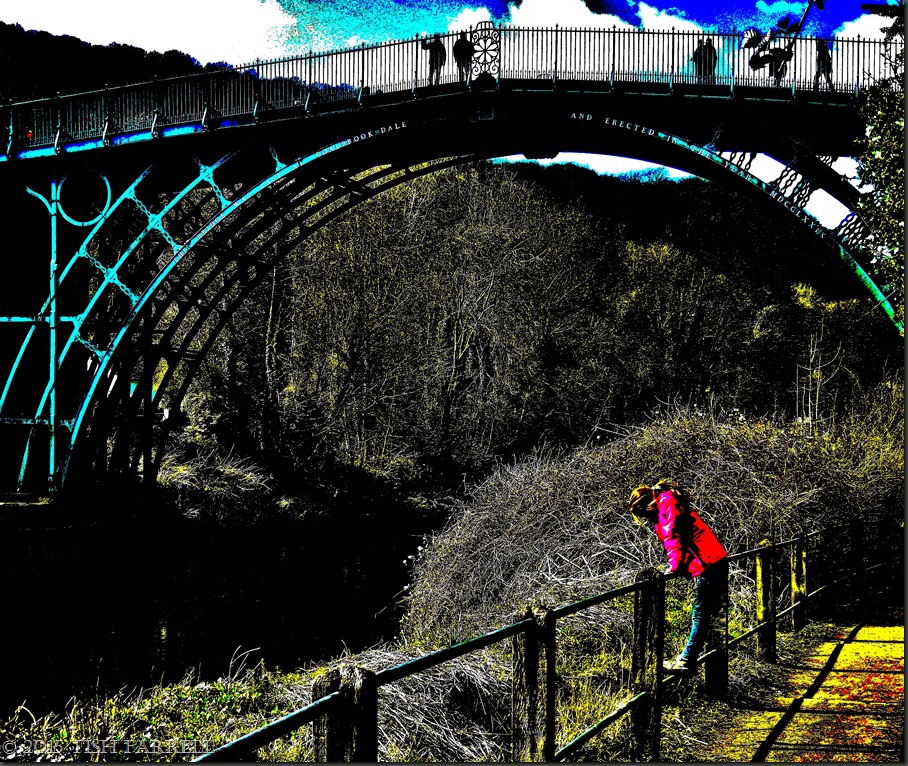 This post was prompted by Sally at Lens and Pens Phoneography & Non-SLR Digital Devices Challenge. Week 5 of any given month is about editing/processing images on a theme of choice, in this case architecture. The first image was cropped and  then played with in Windows Photo Gallery. I rather like the sepia version. I included the final image to show the construction techniques in more detail. It was taken in ‘Dynamic Monochrome’ on my  Lumix point and shoot, and then cropped and histogrammed to achieve this final look. Given the subject, it thus makes a virtue, I think, of the sunburst on the bridge parapet. It makes me think of blast furnaces and the way the iron was produced.

38 thoughts on “Bridge, what bridge? Only the world’s first cast iron one”