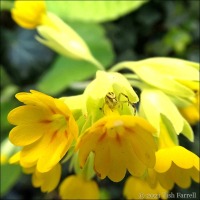 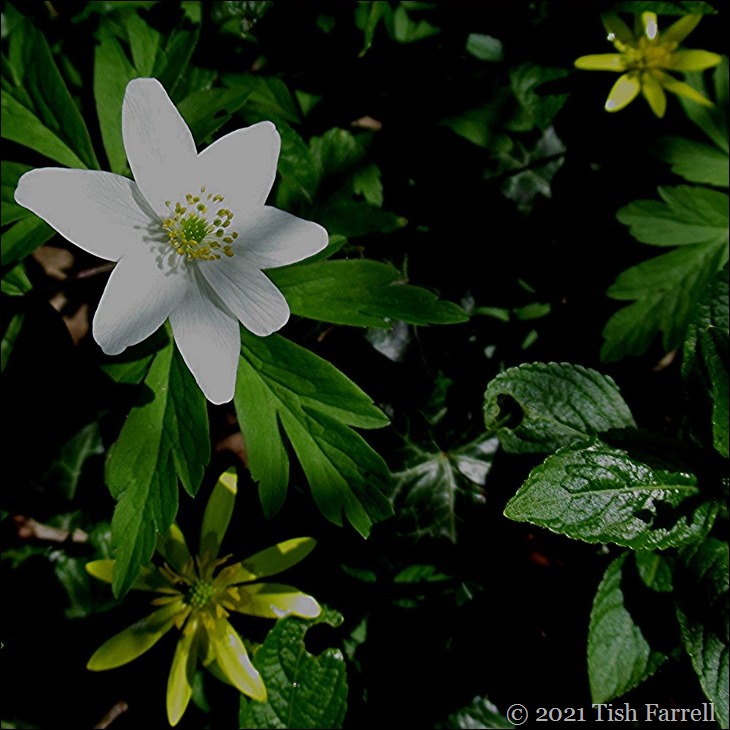 That would be wood anemones and lesser celandines – the bright stars of English wildflowerdom. The celandines have been flowering for weeks and weeks and usually are among the first spring bloomers. It’s hard not to smile when you first spot their mini-sunbursts popping out the dreary over-wintered grass.

This year they have also colonised our front flower bed that runs down to the road. There must have been hosts of seeds among the wood chippings that I gathered up last year after tree and branch felling in the Linden Field. A double bonus then: first the autumn mulch, then an unforeseen spring flowering. They grow very low to the ground in coronets of lush green leaves, and so have most discreetly filled gaps between the daffodil clumps. I expect I’ll let them stay. The pilewort common name of course denotes an old herbal application.

I’m not expecting any wood anemones to emerge from the front garden mulch. As their name suggests, they prefer wooded terrain, or at least ground where woodland once was. I found the one in the photo growing beside the path between the Linden Field and Windmill Hill, under the oaks and conifers, keeping company with primroses and violets and dog’s mercury and wild arum. Legend has it that only the wind will make them open their delicate petals. I beg to differ. When I took this one’s photo it was embracing the sun full-on, as you can see. The next day when I returned to the same spot, the anemones were all hanging their heads and shivering in the cold wind. With no sunshine on offer, they looked like bedraggled waifs, much hard-done-by.

Today in Shropshire the snow flurries have stopped. We have sun and wind. A good moment then to check on the plant life in the Linden Field, and also to gather supplies from a fresh cache of wood chips from a felled oak tree. They chips are brilliant for allotment paths and dosing the hot compost bin. The things one does!

The Wood Anemone (Anemone nemorosa)  is one of the loveliest of Britain’s wild flowers. The delicate white blooms have bell-like heads that open to the sun as this one is doing. It’s about 3 cm across. They are also among the earliest spring flowers, carpeting ancient woodlands before the trees come into leaf and make too much shade. The flowers nod in the April breeze, which distinctive habit doubtless inspired their country names of Wind-flower and Grandmother’s Nightcap.

As ever, I am indebted to Richard Mabey and his magnificent (and very large) book Flora Britannica for further intriguing details about this plant.

I found this particular anemone yesterday. It was growing below Windmill Hill, on the edge of the Linden Field. I’d not noticed anemones there before, and the sparse little colony hardly made a carpet. They were also growing  under trees that I know have been planted in the last hundred years to commemorate various events associated with the Much Wenlock Olympian Games. Before that, in Victorian times anyway, the field was, well, a field. This, then, presents a bit of mystery.

Mabey says that in Britain the Wood Anemone only very rarely produces viable seed. Instead it spreads by means of its root system, six feet for every hundred years, which is pretty slow going. When you find them, they are thus a pretty good indicator of ancient woodland since they rarely extend beyond these age-old sites. All of which makes me wonder how the little group of Wind-Flowers found its way to the Linden Field. Perhaps they are relic rootstock from times when the ground in question did host ancient tree cover. Mabey suggests that this could be a explanation for the more open-growing colonies now to be found on the limestone pavements of the Yorkshire Dales.

Anyway, however they got there, I was very pleased to see them. More power to their root systems is all I can say. Faster. Faster. We can’t have too many Wind-Flowers.

Anna nominated me for this challenge, so please take a look at her cloud scenes at Una Vista di San Fermo. Also Meg has posted some magnificent Warsaw tree-scapes; Ark at A Tale Unfolds gives us stunning bee and other flying insect shots; while Sylvia at Another Day In Paradise takes the absolute biscuit with parting shots of her erstwhile (too close for comfort) neighbour, alligator Mr. A.