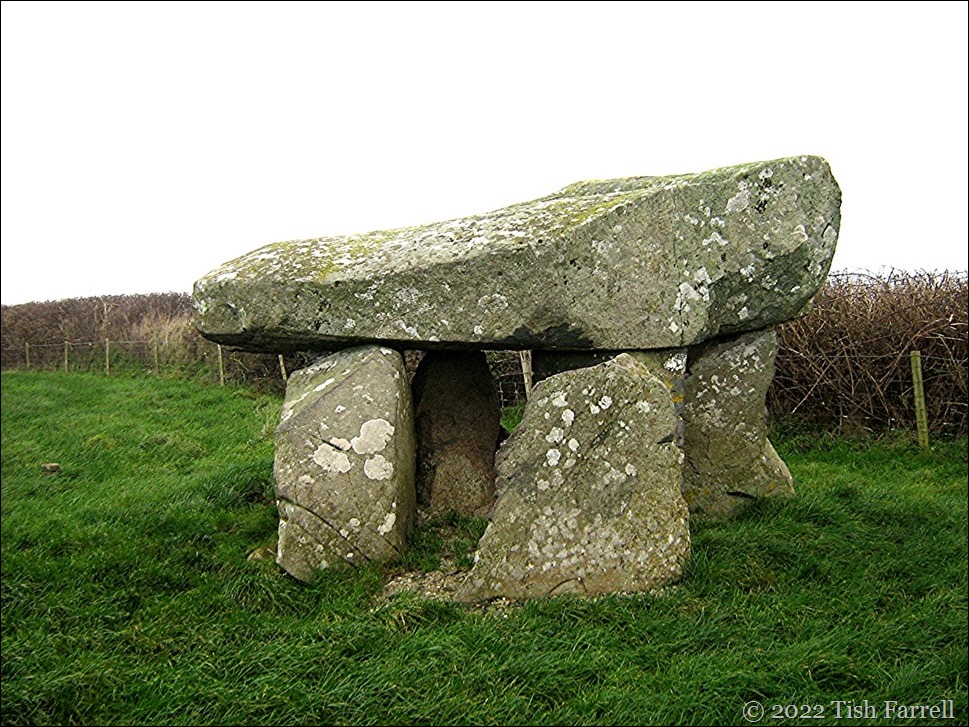 Farrell Safaris are notorious for their cross-country deviations even when kitted out with a fully functioning map. And so it was on our recent Anglesey stay, and with an intended short (couple of miles) drive from Aberffraw to next-door Rhosneigr, that we managed to miss the turn and instead head off to who knew where.

Usually when this happens, Captain Farrell’s first resort is to keep going, perhaps in hopes that, if we do this for long enough, all will come right.  Fortunately this time we had savvy niece in the back seat, and she soon had our position pinpointed on her phone. We did indeed need to turn around. And it was while this was going on – i.e. finding a suitable turning space on a narrow country lane, that I spotted the Neolithic burial chamber in the far corner of a farm field.

Can we stop, says me, hoping for a better look over the wall and maybe a long-shot photo (poor light willing).

But once turned about, we soon saw that a proper visit was feasible. There were official signs in Welsh and in English ‘Ty-Newydd Burial Chamber’, a pull-in space on the verge and a stile.  Sister, cockapoo and niece were up for a visit, though the wind was brutal and it was starting to rain. In my rush to head the expedition as chief prehistorian I was ensnared in a hawthorn bush and held up proceedings. Meanwhile Captain Farrell gathered himself for unscheduled activity, and manfully brought up the rear.

We then tramped across the muddy field only to find the ancient capstone (a whopping 12 ft by 5ft/3.7 m by 1.5m) had been propped up on two unsightly brick pillars set on a concrete base. And while their solid intervention was doubtless necessary for many reasons, their presence jarred. The dreary light did not help.

So it turned out that the original drive-by view had been more impressively mysterious than the close-quarters’ encounter. Ah well.

The tomb was excavated in 1935 and is considered typical of the funerary monuments built by the first farming people (see also the Barclodiad y Gawres tomb in an earlier post). Finds included a hearth with charcoal remains, some flint flakes, a burned flint arrow head, and a chip from a polished stone axe. But there were also pottery shards of the later Beaker People of the Bronze Age, and signs of a further chamber, which suggest the tomb was used, or re-used over a considerable time-span. The large cairn that once covered the tomb is long gone – ploughed out and/or its stones re-purposed. Instead, small concrete bollards have been set out to indicate its original extent. Useful guidance on the one hand, but like the brick supports, they felt intrusive somehow.

Anyway, we paid our respects to ancient souls who then, like us, must have been alarmingly blasted by the training jets taking off at nearby RAF Valley. The New Year’s holiday was over and ‘business as usual’ resumed. Out of the gale the engines’ roar filled the sky, the earth, the universe, my skull. It was noise so loud as to be physically shattering. I had that strange sense of someone walking over my grave and a horrid glimpse of what it must to be some innocent village dweller in a war zone; to be on the receiving end of the northern hemisphere’s mighty industrial war machine.

Several times during that day the soundtrack for Armageddon rebounded through my bones and being. It happened again in late afternoon as we walked on Aberffraw’s magnificent beach. And I wondered then, as I have done many times recently, what on earth the ancestors would think of us now. We who believe ourselves so very civilised?

A Hawk T1 or T2 (?) caught over Aberffraw estuary. And the photos taken immediately afterwards – first looking towards mainland Wales, and the second across the Celtic Sea towards Ireland: 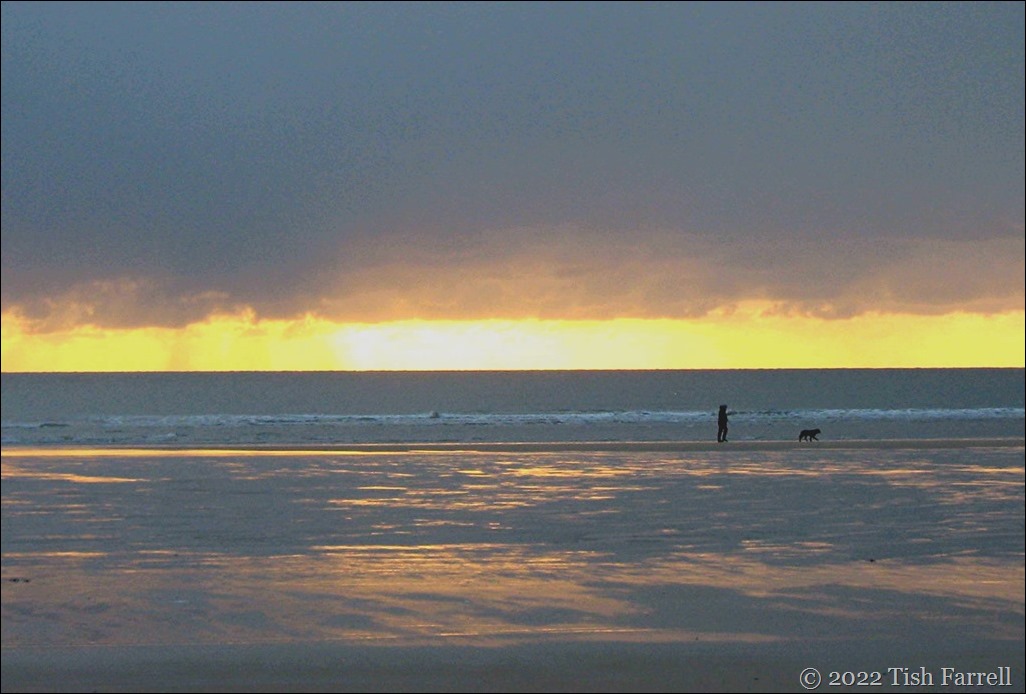 This week Patti wants to see the kinds of scenes/objects that catch our eye or pique our interest. Please go and view her interesting choices.

65 thoughts on “The Things We Find When Lost”