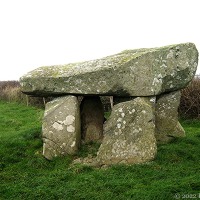 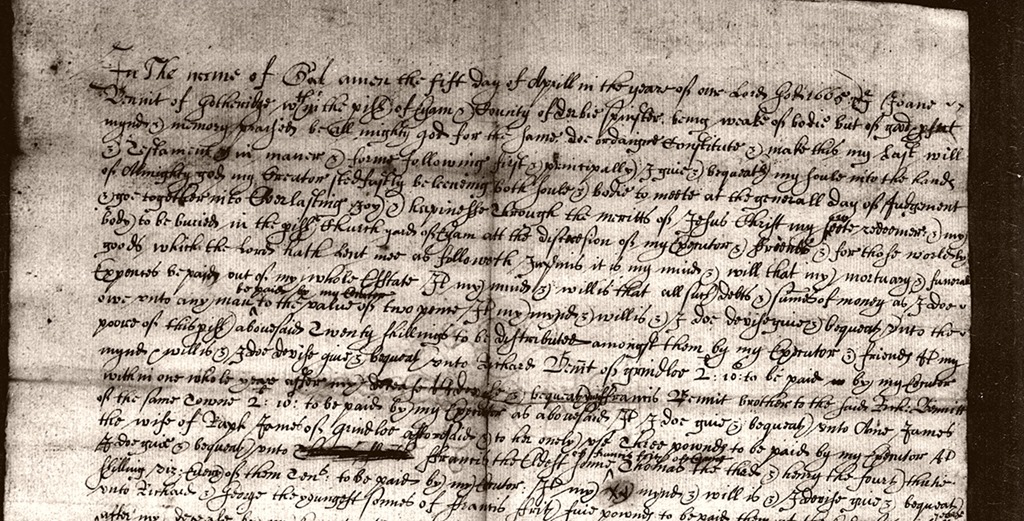 Revelations, mysteries, contemporary beliefs, conventions, testator glimpses – how they might have lived their lives, relationships social and personal, their character and state of mind, small and touching details – there are clues to all of these and more in the last will and testament of 10th great grandaunt, Joan Bennett, spinster of Gotheridge in the parish of Eyam (Pronounced Eem). As you’ll see later, there are also connections with tragedies yet to come, because I, as transcriber, have the luxury of hindsight – 356 years’ worth – although I have to say it was only when I’d finished deciphering the document I then discovered the sad ironies of Joan’s many bequests.

But first a recap. Last time I said I had found the 17th century wills of father and daughter, William Bennett, farmer of Gotheridge (Gotherage), an isolated tenant farm on the Highlow estate of the Eyre family, who died in 1620, and his daughter Joan who died in 1665. As a spinster daughter, of marriageable age, William had made provision for her in a manner that was not unusual at the time when spinsters and widows held precarious status. That is to say she was to be housed and fed and clothed well by William’s family. But there is also a suggestion that she had refused to marry, and William then says he is leaving her £20 (around £3,000 in today’s terms) and a bed, and it is up to her if stays or leaves Gotheridge, but whatever she decides she is to have the £20.

I don’t have baptismal dates for William and his wife Ann, or for their six surviving adult sons and daughters, but it is likely at the time of the will, all the offspring are 21 years and older. They were thus probably born between 1580s and 1599, the latter half of the reign of Elizabeth I. Also, as there appears to be a convention of naming heirs according to seniority, it is possible that Joan is the eldest rather than the family member most on William’s mind. Anyway, we can say she was at least 65 when she wrote her own will (possibly much older), this being done on the fifth day of April 1665, the fourth year of the reign of Charles II.

It’s a long will too for the woman who chose to stay on at Gotheridge and live out her days on the small family farm. The term ‘my mind and will is’ is used repeatedly, and although it is a common idiom, as you read on, encountering some very particular instructions to her relatives, you are left with a sense of a woman who will not be crossed.

It begins with the conventional preamble:

I Joan Bennet…being weak of body but of good and perfect mind and memory praise be to almighty god for the same do ordain constitute and make this my last will and testament.

The bequeathing of her soul to the creator is quite a lengthy passage suggesting a woman of strong Christian faith. She is fully confirmed in the belief of ‘everlasting joy and happiness’ when her soul is redeemed at the ‘general day of judgement.’

Her first bequest is 20 shillings to be shared by her executor and friends among the poor people of Eyam. The National Archives currency converter says this, in spending power, was worth well over £100. Her next bequests are to the surviving 2 sons and daughter of her deceased brother William. Nephews George and Francis Bennet, both of Grindlow, are to receive the equivalent of £250 each, but their sister, Ann, married to Ralph James of Grindlow is to have £300 with the stipulation that it is “for her use only.” These are the grandchildren mentioned in William’s will who, in 1620, were each to receive a lamb.

The remaining bequests relate mostly to another niece, Elizabeth wife of Francis Frith of Eyam, and to their many children who range from six- to twenty eight years old at the time. Throughout this part of the will it is very much Joan’s ‘mind and will’ that her largesse be distributed very specifically to numbered offspring. Eldest Frith son Francis and third son Thomas and fourth son Henry are each to receive 30 shillings within a year of her death. Whereas the youngest sons Richard and George must wait 2 years for their £2  10 shillings, and if one dies then the other will receive his share.

Mary Frith the oldest daughter will receive 10 shillings, but to the youngest girls, Anne and Elizabeth, she leaves one cow, which is to be delivered to their mother Elizabeth. She then says if Elizabeth sells the cow, then the full amount received must be put towards the upbringing of the girls. She then bequeaths to niece Elizabeth:

And finally we come to the heart of the will:

My mind and will is I do devise give and bequeath unto William Frith second son of Francis Firth all my possession and interest of this my messuage and tenement* of Gotheridge if he can accord with the right worshipful Mr. Robert Eyre Lord of the same for the rent thereof. Item: my mind and will is if any of the abovesaid be not content with his or her legacy that they should lose his or her part by virtue of this my last will and testament.

And after that stiff admonition, she then leaves all other of her possessions, moveable and unmoveable, quick and dead “unto my well beloved friend William Frith, second son of Francis Frith abovesaid” and further ordains him “my whole and sole executor of my last will and testament hoping he will perform the same according to the trust I have reposed in him.”

View from Gotherage Plantation, south of the farm site (over the brow of the hill to the left of the telegraph pole just seen on far middle right).

So: the daughter to whom William Bennett gave leave and means to do as ‘she pleaseth’, stayed on at Gotheridge all her life. It seems likely that at least one brother, bachelor Francis lived there too. There is reference to the administration of his will in 1642 (though frustratingly no actual will) which leaves all his possessions to Joan and, I think, the nephew mentioned in her will Richard Bennet, husbandman of Grindlow. (Grindlow is small farming-lead-mining community a couple of miles southwest of Gotherage barn, and seems to have been another Bennett family stronghold).

But is there some hint that Joan’s bequest of the Gotheridge tenancy and all her chattells and cattells to ‘my well beloved friend William Frith’ was expected to be unpopular? I have seen instructions in other wills for legatees not to fall out, but Joan’s threat seems designed to keep everyone toeing her line. William was probably around 22 years old in 1665. I have no other record of him other than a mention in another later will.

His siblings Henry (17), and the younger children Anne (13), Elizabeth (10) and George (7) were all victims of plague in   the summer of 1666 as were his parents Elizabeth and Francis. The infection had first arrived in September 1665. It is said it came with a parcel of clothing materials from London, ordered by the local tailor for repurposing. The assistant who opened the package swiftly died, followed, over then next 14 months by 259 of his 800 fellow villagers. The villagers’ decision to close their borders to stop the infection spreading elsewhere is something of a legend. (See earlier post about Eyam here.)

But back to Joan’s will. Given the ready transmission of infection via fleas and possibly also body lice in used clothing, Joan’s bequest of all her clothes to niece Elizabeth acquires certain sinister resonances, despite being very much ‘before the event’;  the plague outbreak came some six months after the will was written. Elizabeth certainly had little enough time to benefit from the gift of linen and woollen garments. They appear to have been of good quality too; the appraisers assessed the worth of Joan’s clothing, along with her purse, at £20 (multiply by 100 for current values).

Joan’s other goods and farm stock were appraised at over £100. This included her mare, 4 oxen, 3 cows, 2 heifers, 35 sheep, 2 swine, bees, corn in the ground. In the barn were ploughs, harrows, carts, the grain store and an ale brewing vat. There were turves for the hearth and a stock of manure.

In the house was a feather bed, two ‘chaff’ (straw waste) beds, blankets, sheets, coverlets and quilts wonderfully called ‘bed hillings’. There were the usual boards for trestle tables, a cupboard and dishboard etc. There were 6 arks (chests), brass pots and pans, some pewter ware, 6 cushions, a good supply of oats, and sacks for storing corn, salt for salting hams. It all sounds modest enough. On the other hand, it seems all needs were being met, which is surely a true measure of wealth and wellbeing.

There is no knowing if William did come to an agreement with Robert Eyre to take over Gotheridge. If he did do so, it would have been for a short time only. (The Highlow rent books in Derbyshire record office would be the place to look). In any event by 1668 Joan’s great nephew, Samuel Bennet and his wife Joan, are already living at Gotheridge. In that year the Eyam parish register records the birth of George, who if not the first born, is the first of several children born at Gotheridge. After George come Isaac and Amie, probably twins, Joan, then Anne and Samuel who both died in infancy and finally Richard born in 1688, who I believe is my 7th great grandfather.

But  what of William Frith who clearly enjoyed Joan Bennet’s highest regard, the young man who lost so much that was dear to him? For now I’m still looking.

When 11th Great Grandfather was about to die