It was a frequent and rather sinister feature of my childhood: Sunday afternoon drives around the Cheshire lanes. Always winter. Flat fields empty of their dairy herds. Neat hedges and the metal railed fences typical of this county. Then the sudden glimpse of it – the great grey dish in the sky: the disturbing scaffold-like armature that held it aloft – sometimes the dish tilted one way; other times in quite another position. So that the first sight of it across the flatlands would always be a shock to the system. Science Fiction in action then. Scenes I remember only in black and white.

But if the sight of it aroused feelings of vague anxiety, as a five-year-old I was also quick to register the awe and excitement in my parents’ voices. It might be worrying to me but, I concluded, this monstrous machine was clearly ‘a good thing’.

This, the Jodrell Bank steerable radio telescope, had only just been completed. It was the largest in the world back in 1957 – the dish 250 feet (76 metres) in diameter. Sir Bernard Lovell – a radio astronomer at Manchester University – was its creator. He had worked on the development of radar during World War 2, and now wanted to study cosmic rays. The gun turret parts of two British warships were apparently re-purposed to drive the telescope.

It became operational in time for the launch of Sputnik 1 in October 1957. This was the world’s first artificial satellite launched by the Soviet Union. My parents were very excited about this too. While Jodrell Bank tracked the path of Sputnik’s booster rockets, my parents were staying up into the small hours, standing in the garden of Love Lane House, Sputnik spotting. They saw it too, and got their names in the local paper. Whizzy spinning sputniks on strings were, for some time to come, the toys to have. I received several. Cardboard ones came free in Cornflakes packets. In fact Sputnik was a frequently uttered word in our house. Perhaps it’s what predisposed me to want to learn Russian a decade later.

In 1966 the Soviet Union actually asked Jodrell Bank to track their Luna 9 moon lander spacecraft. Thus it would seem that the Cold War had its lukewarm moments, although relations were not so well fostered afterwards when the British Press got hold of, and published the Jodrell Bank photos ahead of the Russians giving their permission.

Later, in concert with US surveillance, the telescope was used to monitor Soviet spy satellites. And yes, in between spying activities, there was also some serious scientific research – time spent observing those esoteric out-of-space entities – pulsars, quasars and gravitational lenses. And please expect no further explanations of these matters. My studied viewings of the TV programmes by the very excellent theoretical physicist Professor Jim Al-Kalili have left no residue of knowledge in my brain cells, or at least none that I am aware of.

Today, the Lovell telescope has been joined by several others on the site – all part of Manchester University’s Jodrell Bank Centre of Astrophysics. It has a visitor centre, and all manner of exciting things going on there. This photo, by the way, was captured by chance last year when I happened to look out of the window of the Manchester to Crewe train. A veritable blast from the past then, but this time in full colour. I still find it worrying though – that great grey dish eavesdropping on space.

And before I go, there’s also a literary connection with Jodrell Bank. As a pre-teen I was a huge fan of Cheshire children’s writer Alan Garner, and in particular of his 1960s titles The Weirdstone of Brisingamen and its sequel The Moon of Gomrath. Garner didn’t think much of the first book, and it was only in 2012 that the third volume of the originally planned trilogy was published. But then Boneland is not for children. It is a fusion of science, prehistory, fantasy and psychotherapy whereby Colin of the first two books is now a professor at Jodrell Bank, trying to resolve the loss of his twin, Susan, and the loss of his memory. It’s a haunting work with many layers. Perhaps, like me, Alan Garner found Lovell’s Telescope a disturbing sight on the Cheshire Plain, raising more questions than the ones it was intended to answer. 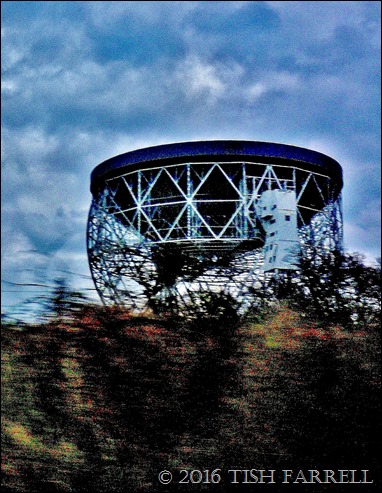 For more Thursday’s Special posts please visit Paula at Lost in Translation. She asks us to pick a word from the following: Pursuit, Veneration, Effervescent, Personal, Peculiar. And then post a photo or photos. I think I’ve scored the 3 ‘p’s’ in this post plus a bit of veneration for Alan Garner.

41 thoughts on “A Peculiar Pursuit? Listening In On Star Land”