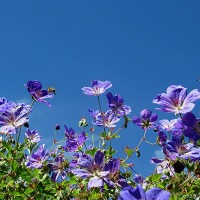 It is a wild and brooding place, one of the strangest in South Shropshire’s hill country. For one thing the Devil has his chair there, and when the mist comes down, this is where he sits – brimming with pent-up malevolence but unseen by us mortals.

We did not encounter mist on Saturday when we ventured there so we assumed the Devil was out. But there were lowering skies, a near absence of light and the threat of rain. Oh yes, and wind, that somehow caused a discontinuity of function between brain and feet, so making the trek over moorland paths strewn with quartzite cobbles somewhat hazardous.

The Stiperstones ridge extends 5 miles (8 km), and at its highest point on Manstone Rock is 1700 feet (536 metres) above sea level.  Standing on the top you can look west across the great expanse of Wales, and on clear days see Snowdon and Cader Idris mountains. Turn east, and you can scan across the Long Mynd to north east Shropshire and far, far beyond.

The ridge has ancient origins and half the world away, some 60 degrees south of the equator. It probably began existence as a quartz sand beach laid down by a shallow sea during the Ordovician, some 495-443 million years ago. Thereafter the landmass moved one inch a year for the next 450 million years to reach its present location 50 degrees north of the equator. A slow, slow journey, then, of 7,500 miles.

You might think, as you look at succeeding images, that it doesn’t look much like a beach these days. In fact it has suffered much folding, sending the beach skywards, and tilting it at angles of 80 degrees in places. Along its length are a series of  quartzite tors described by the eminent Victorian geologist, Murchison, as ‘rugged Cyclopean ruins’ (The Silurian System 1854). Besides the Devil’s Chair and Manstone Rocks there are also Diamond Rock, Cranberry Rock, Nipstone Rock and several other eye-catching outcrops.

The place is also described as ‘relict landscape’, one that is undergoing continuous weathering. What we see today was mostly shaped during the last Ice Age when the quartzite was locked in permafrost. Moisture seeped into the cracks, and as it froze, expanded, causing the rock to fissure and fragment.

The moors below the ridge-top are rich in whinberries and cowberries, and so provided food and grazing for human populations from at least the Bronze Age. These people from prehistory left us their burial monuments – stone cairns along the hill’s spine. Then around 100 CE the Romans arrived, avidly searching of silver, but mostly mining lead, and smelting it in hillside boles to provide material to line their plunge pools, make water pipes, cover roofs, construct their coffins, and for the craftsmen of Wroxeter Roman City to use in the production of pewter.

Down succeeding centuries lead mining expanded dramatically. The flanks of the Stiperstones are littered with adits and the mine shafts that featured so dramatically in Mary Webb’s Gone To Earth.  One of the biggest concerns, Snailbeach Mine, started at the foot of the hill in 1783, employed 500 workers at its height. For a century and more, then, the wild countryside was also a filthy industrial zone of delving, massive spoil heaps, steam-pumping engines and hard-worked men and boys.

Yet somehow this phase too has somehow welded itself into the mythic fabric of the landscape, an impression heightened by the strange visual effect of Stiperstones quartzite – that it somehow looks black against the light, when in fact it is grey and speckled with ice white crystals.

And on that note I’ll leave you with the words of Much Wenlock’s Mary Webb, whose writerly landscape this very much was – and in all senses. This quote is from The Golden Arrow:

The whole countryside was acquiring in his eyes something portentous, apocalyptic. For the personality of a man reacting upon the spirit of a place produces something which is neither the man nor the  place, but fiercer or more beautiful than either. This third entity, born of the union,  becomes a  power and a haunting presence – non-human, non-material.

Changing Seasons – Please visit Max for this month’s jaw-dropping vistas from his trekking trip to the Romsdalseggen: not for the faint-hearted.