Yesterday morning I set off across the Linden Field on one of my periodic scavenging missions. I’d found the stash back in the winter when it was frozen into a craggy hummock: too hard to prise open the constituent parts. We’re talking about wood chips here. Last year one of the oaks at the top of the field where it meets the foot of Windmill Hill had shed a large branch. The brash was duly shredded and left in a heap by the boundary fence. And what a sight to gladden this gardener’s heart, though I had to wait for it to dry out, first after the thaw, and then after weeks of rain.

It is amazingly useful stuff. Firstly it’s good to add to the garden and kitchen waste that goes into our hot compost bin. Secondly it makes an excellent mulch for the home flower borders. Thirdly, and mostly, I use it at the allotment where I pile it on layers of cardboard set between the raised beds; this in a bid to maintain weed-free paths. When, after a year or two, when the cardboard has melted and the chippings begun to break down, the whole lot can be added to the allotment compost bins, and the cardboard laying and scavenging begins again.

And so that was my mission – out in the brilliant sunshine and still frosty, frosty air to collect fresh path makings. Of course I always take the camera too, which meant that when I reached the heap, I was at once distracted by bluebells. There they shimmered on the flanks of Windmill Hill, proper native bluebells: 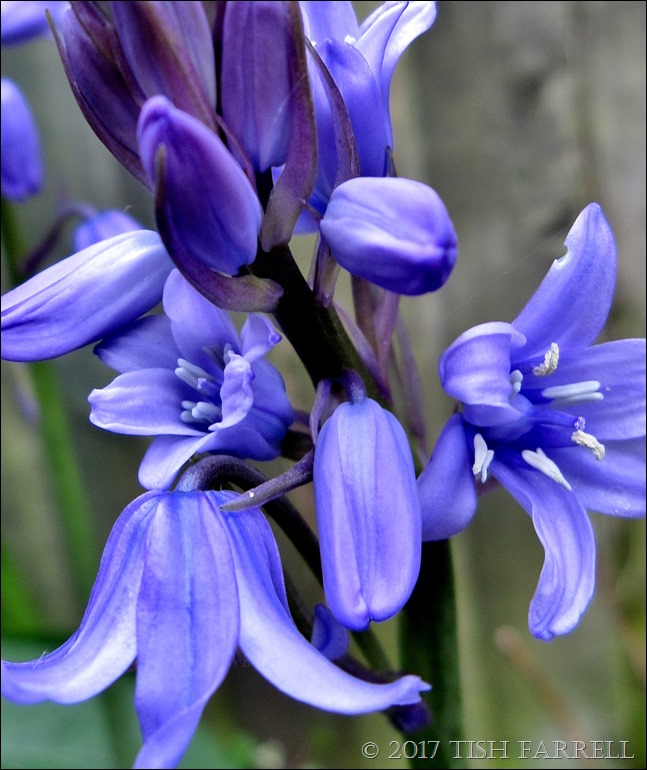 Naturally I would have to say that nothing compares with the hazy woodland swathes of British bluebells; their slender spires gently nodding; the subtle fragrance that not quite like any other scent.

By contrast, the garden-escaping Spanish sort are much more upright and chunky, more like a skinny hyacinth. They have blue pollen too, or so the Woodland Trust site tells me. And it also says they are a big MENACE. People hate them in their gardens and so dig them up and dump them round the countryside, where they have relations with our native species, so changing them forever.

Without doubt, losing our native species would be a great a shame, but I still have time for the Spanish cousins that pop up around our garden. Admittedly I used to try to dig them up and compost them – until I learned that it was a pretty impossible task to excavate every part of them.

Now when they flower, I pick them. They make excellent house flowers, their bells opening wider and the blue fading over the days. They smell nice too. I’m thinking that cutting them off at the roots might also put a stop to fraternisation, and ultimately weaken the plant. In the meantime, I have the pleasure of them indoors.

Picking the native species is of course very much forbidden. But those of you who live in the UK will soon have the pleasure of spotting them in a wood near you. Reports have it that they will be flowering early this year.