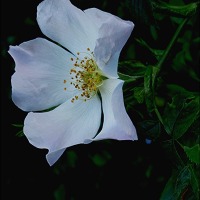 You could say that Swahili culture was born of the monsoon winds, from the human drive to trade and of prevailing weather. For two thousand years Arab merchants plied East Africa’s Indian Ocean shores, from Mogadishu (Somalia) to the mouth of the Limpopo River (Mozambique), arriving with the north easterly Kaskazi, departing on the south easterly Kusi. They came in great wooden cargo dhows, bringing dates, frankincense, wheat, dried fish, Persian chests, rugs, silks and jewels which they traded with Bantu farmers in exchange for the treasures of Africa: ivory, leopard skins, rhinoceros horn, ambergris, tortoise shell, mangrove poles and gold.

By 700 AD many Arab merchants  were beginning to settle permanently on the East African seaboard, and the earliest mosques so far discovered date from around this time. These new colonists would have married the daughters of their Bantu trading hosts and doubtless used these new local connections to expand their trading opportunities. Soon the African farming settlements were expanding into cosmopolitan port towns. Itinerant merchants and their crews would also have had plenty of chances to get to know the local girls. The weather served this purpose too. Between August and November the trade winds fail. Voyaging captains would thus put in to a known safe haven to wait for good winds. And while this was not a time to be idle, since boats had to be beached and the crew put to cleaning and sealing the underwater timbers with a paste of beef fat and lime, three months was a long time to be ashore and far from home.

And so from this trade for trade, evolved a new culture, a loose confederation of self-governing city states stretching 3,000 km along the East African coast. Islam melded with Bantu customs and beliefs, and transactions’ fusion of Arabic with Bantu vernaculars gave rise to a new language, KiSwahili, which is still the lingua franca of East Africa today. Into this mix also came settler-traders from the Indian Subcontinent, shipwrecked Chinese sailors and refugee (Shirazi) Persians. Welcome, then, to the world of Sinbad, or Sendibada as the Swahili people call him, the ancient Empire of Zanj.

Lamu Town, off the Kenya coast, is one of the best preserved Swahili towns and  has been lived in for over 700 years. It is now a World Heritage Site. The building of the Swahili stone towns was apparently underway by 700 AD, the stone in question being coral rag, quarried from uplifted reef beds. Lamu town is not one of the earliest or the finest, but it was once a city state ruled over by its own sultan. The remains of far older settlements have been discovered on the nearby islands of Manda and Pate. Today, of course, the dhow trade in East Africa has dwindled, and towns like Lamu are barely a shadow of their former selves. Its residents’ main source of income comes from tourism, fishing , boat building and farming. 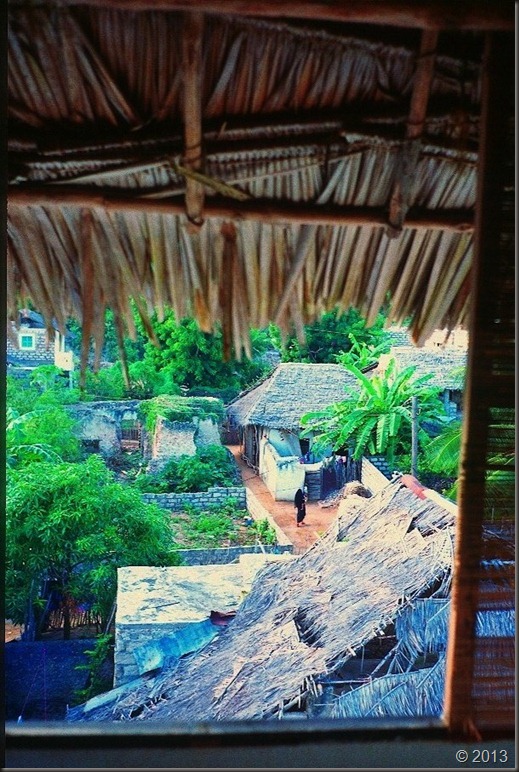 Shela Village, Lamu. It seems like a scene for one of Scheherezade’s night-time tales.

The annual dhow  season used to start from home Arabian ports in August with ripening of the date harvest in the Tigris and Euphrates valleys.* Merchants from the Arabian Gulf and the Gulf of Oman would set sail for Basra at the head of the Persian Gulf where the dates were crated and taken on board. The size of a dhow was gauged not in tonnage but by the number of Basra date boxes it could take. Thereafter, the dhow  captains (nakhodas)  might make for Aden to pick up salt or ply the Red Sea before heading south for Africa, trading as they went. Alternatively they might set off from the Gulf of Oman for Bombay, keeping the shore always in sight as they sailed east. Then, after trading down the Indian coast to Cochin, the winds would take them back across the Indian Ocean to the Comoros Islands where they would wait for the Kusi to take them homeward up the African coast.

The trade routes, of course, stretched far beyond the Indian Ocean and, during the 11th to 16th centuries when many of the Swahili city states were having their golden age, dhow merchants found ready buyers for exotic goods from China, Cambodia, Thailand and India. Today if you walk along the beach at Lamu you can pick up pieces of ancient Chinese porcelain. These wares were very popular from the 14th century, and Swahili town houses were fitted out with ornately plastered display niches (zidaka) to display their prized possessions.

It is also true that exotic goods went out from Africa. In the early 1400s, the Swahili Sultan of Malindi (north of Mombasa) despatched to the Chinese Emperor via the King of Bengal, a live giraffe along with a ‘celestial stag’ or oryx. This was taken as an ‘open for business’ calling card and thereafter the Chinese merchant ships sailed directly into East African ports. 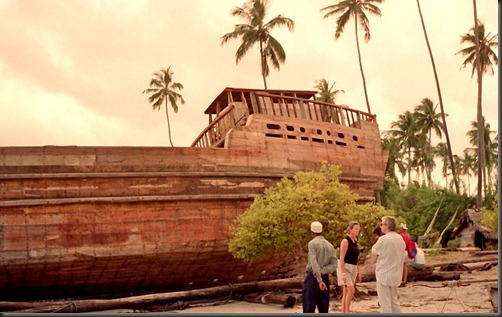 Although the days of the big dhows are over on the Kenyan coast, we saw this one being newly built on Maruhubi Beach near Zanzibar’s Stone Town in 1999. It had been commissioned by a Somali merchant.

Lamu’s main  street in recent times; only donkey transport will do for deliveries.

Much of the wealth of the Swahili states came from African gold. During the fourteenth and fifteenth centuries the Shona rulers of Great Zimbabwe, far inland, were trading with the coastal Swahili city of Sofala (Mozambique). The Shona traders exchanged massive supplies of gold and ivory for Arab cloth. This gold drove the East African trade and it was not long before it was attracting European traders.

And so into the midst of this prosperity sailed Vasco da Gama (1498). He was pioneering a maritime route to India, but after his glowing accounts of the wealth he had observed while putting in at Mombasa and Malindi, (the sultan robed in damask trimmed with green satin and sitting beneath a crimson satin sunshade) Portuguese eyes turned to the East African coast. They built a number of forts there, including ones at Sofala and Mombasa, using them as strongholds in their bid to seize the Indian Ocean trade from Arab merchants.

The Portuguese built Fort Jesus in Mombasa in 1591. The building of such forts along the Swahili coast was part of their strategy to seize control of the Indian Ocean trade from the Arabs. A century later they were driven back to their Mozambique strongholds by Omani forces.

There followed many bloody battles over the next two hundred years, and it was during this time that most of the Swahili city states fell into decline. Their only hope was to call for outside help, and it came in the shape of the Omani of Muscat who made numerous attempts to oust the Portuguese, finally pushing them back to Mozambique in the 18th century. By the 19th century much of Swahili coast was ruled by the Sultans of Oman, and in 1832 they moved their capital to Zanzibar. 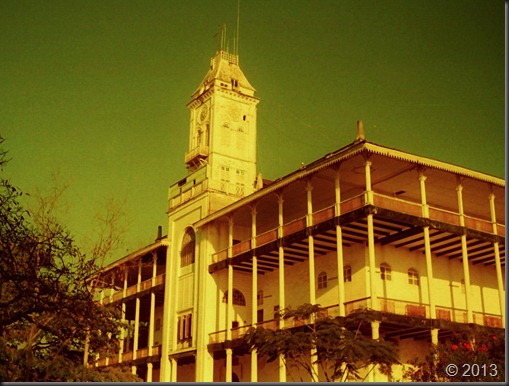 The Sultan’s Palace ‘The House of Wonders’, Zanzibar. The British navy bombarded it in 1896 in the 45-minute war.

So now comes the real sting in this Arabian Nights’ tale. I have not mentioned the ‘S’ word. And for hundreds of years SLAVES were indeed a major ‘commodity’ shipping out from Swahili ports for destinations in Arabia and Persia. But it was not until the 19th century that the worst excesses of this terrible trade were widely documented. Under Omani rule slaving expanded. The Sultans had clove plantations to be worked. So, instead of relying on supplies of human cargo delivered by African traders from the African hinterland, Swahili slavers began to lead their own expeditions into the interior. Here they rounded up both slaves and ivory, forcing their hapless captives to carry the tusks hundreds of miles to ports like Mombasa.

One of the most notorious slavers was Tippu Tib. His mother was a Muscat Arab aristocrat, but his father was a Swahili trader. His reign of terror extended across East Africa into what is now the Democratic Republic of Congo. By 1895 he had seven plantations and 10,000 slaves. It was only in 1873 that the Zanzibar slave market was shut down.

Tippu Tip the Zanzibari slaver (1837-1905), and the memorial to his human cargo on the site of Zanzibar’s slave market. At its height, some 50,000 souls were trafficked through this market each year, and this was only ONE market on the Swahili coast. The Sultans further exploited the slave  market by playing the Portuguese off against the French. Although the Atlantic slave trade had ceased by 1834, the buying of slaves by European and Arab merchants continued into the twentieth century. The Zanzibar slave market closed only in 1873.

The subject of slavery now brings me back to Lamu where I started this tale. By 1652 the Lamu had had more than enough of the Portguese and called on Oman to help see them off. Thereafter Lamu became an Omani protectorate which led to a revival of the town’s fortunes. Slaves were also the chief export, and in fact the trade was not outlawed here until 1907, by which time Kenya (British East Africa) had been a British Protectorate for twelve years. 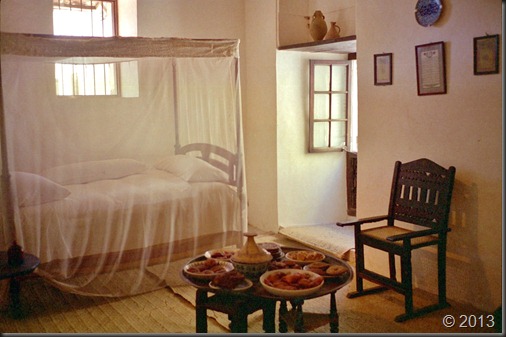 The Swahili House Museum, Lamu, shows what life was like in an 18th-19th century merchant’s home. 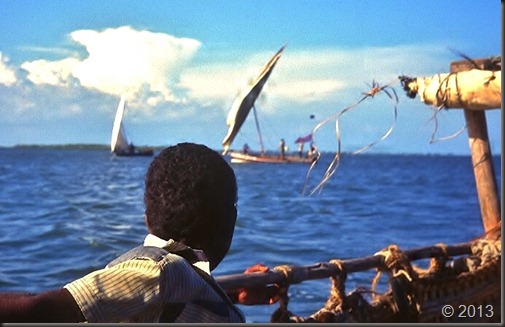 So what of the future? Will places like Lamu slumber away, selling themselves as romantic retreats for lotus-eating tourists. What kind of lives will their young people have ? Will they not simply have to leave? Or are there new ventures afoot in this Land of Zanj? Word has it that the Chinese have come calling once more, and not in response to gifts of giraffes, or to deliver more crates of blue and white porcelain. Now they have plans to turn Lamu into the biggest port in East Africa, opening up trading access for land-locked South Sudan and Ethiopia. So begins a new chapter in gyre of Indian Ocean trade. Today, it is not the Kaskazi or the Kusi that will dictate its destination and progress of this multi-ethnic enterprise, but diesel and commercial imperative. In some ways, then, not much has changed.

33 thoughts on “The Swahili”